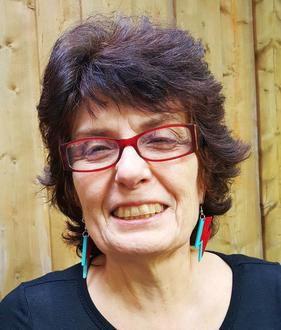 Art is an amulet. It can be. Don’t be afraid to love just one painting. Don’t be embarrassed. There’s a conversation and the dead might be speaking to you across the centuries from the chemical disturbances that created the image. Aggravated, irritated, smitten, curious, love on a first date. There are patches to be made, small reckonings with your own solitary heart. You don’t need to bother with the little legends at the side of images, or the audio guide. A living woman, a dead man, they yearn for their bones to have a conversation with you.

Last November, I walked into the Amsterdam Rijksmuseum first thing on a Sunday morning; we’d flown from Toronto Saturday night, overnight, arrived at just after seven a.m. and at nine I was walking into an exhibit of Rembrandt-Velazquez. I was dizzy, swooning with the end of clock time, the physical sense of the city Amsterdam below sea level. I’d written my novel Stella Atlantis with Rembrandt and Velazquez, the seventeenth century painters, as centrepieces, and by chance, like a kismet amulet the Rijksmuseum had on an exhibit pairing paintings of the two—room upon room of Dutch-Spanish minuets, boleros, rave dances, like seventeenth century EDM, electronic dances of the paintbrush. I was alone, my husband back at the hotel—I wanted to inhale the paintings.

Do inhale the paintings.

Don’t be embarrassed to stand in a museum like a frozen dolt, all eyes. Let it come to you like a crime scene. Investigate your heart.

It is. They are—paintings, photographs, sculpture—the crime of love. A crime of passion. What do you see? What do you miss? The best part is what you miss. Like friendship, like bonding, it is all about the connection. The research can come later. Sweep your mind of dusty preconceptions. There’s nobody here but us.

I walked into the exhibit. Scarred lungs, brain on fire from days of no sleeping, haunted by writer’s perfectionism, falling through space as I walked along the green murk of the canals into the gates of forever, letting go. Go with the vertigo. Cradle your own idiocy as you enter the dark almost lamplit rooms where the artists crave your company. That was the intention, the quiet show-offs still with us, or gone, or not quiet. You can’t parse the mystery; you can wear it like a magic cloak to heal you. You can heal the artist who is dust now, dust on a paintbrush, you can heal the oxidation, the consternation, the poison in the paint tubes, the arsenic, the cyanide, the disappearing chromatics. Think of it: from cadmiums to polymers, the artist knew the art would morph and die as it lived on. You can be the painting’s therapist.

Saturated with the sienna, mustard, charcoal, origin green of Amsterdam air, I  walked into the exhibit, two days after finishing my final draft of Stella Atlantis back in Toronto. Final draft, or so I thought.

Wrong. Wrong again. Gloriously, stupidly, wonderfully wrong. In front of me on the Rijksmuseum wall: Velazquez’s painting, Vulcan’s Forge. I burst into tears. Waterworks central. From where? Why? What scar? The scene in the painting was of five men, one of them delivering a message. Five men in a foundry, at work, their bodies suggesting the sinews of men, not gods. The story goes that Apollo came to Vulcan’s workshop, Vulcan who invented fire, and Apollo came to say that Vulcan’s wife Venus had been cheating with Mars. Yet the painting was of—to my vertigo eye, to my stupendously frayed nerve endings—of guys. I know those guys, those guys work down the street, around the corner from my house, up the back lane in Toronto, midtown, the workshop guys, the garage artists. A huge painting of the eternal artisans of back laneways. A vein burst inside me, like a writer’s embolism shooting up from my right leg to my heart.

I was flooded with joy, the joy that comes from being disgusted at what you’ve spent years creating.

My novel was all wrong! It was a disease, a wart, a pathetic pretense. I knew stuff on the ground, low gravity. I knew before I knew it was a Zen precept that simple sweeping in my garden down the garden path, snipping, hands in tilth, that my mind was noisy and the music of what I had written was fine and good but missing something. Diego Velazquez was waiting to ambush me. He’d x-rayed me from the grave. His Vulcan’s Forge was counselling me from the Spanish dust, in Amsterdam on a Sunday morning. November 17, 2019. The waterworks came from the mysterious encounter with the large painting, its muscular delicacy; the waterworks came from nada, from todo. There’s no menu for it.

Hold yourself like a mirror up to another mirror. Lead with your scars.

My lungs’ scar tissue was receiving and sending back to the Velazquez figures how, once they lived and they live still, how, once they were created with the old pigments which persist, how, once upon a canvas, an artist was obsessed, and went back to make the sandals of Apollo who came to deliver the bad news of betrayal, made the sandals on the messenger’s feet the colour of sky, or the Mediterranean sea.

If you’re lucky in an art exhibit room, you’re a mess, unslept, hairy and scabby and lost, and your rib cage cracks, your bones part to allow you to reach in, and pull your heart out, beating in your hand.

Walk up to the art. Hold your heart out, like an ear.

Later, in a green space, have a small slow coffee.

Susan Perly is the author of Death Valley, longlisted in 2016 for the presti­gious Scotiabank Giller Prize, and Love Street, told in the voice of late-night DJ Miss Mercy. Her memoir on art and marriage, “Picasso’s Pigeons,” set in Barcelona, appeared in Zone 3 in 2013. A former journalist and radio producer, she broadcast eyewitness reports from Guatemala, El Salvador and Argentina during the Dirty War, and from Baghdad during the Iran-Iraq War. Susan Perly lives in her hometown Toronto with her husband, poet Dennis Lee.

Purchase a copy of Susan Perly's newest novel Stella Atlantis right here on All Lit Up.

May 24, 2017
First Fiction Fridays: Rumi and the Red Handbag by Shawna Lemay