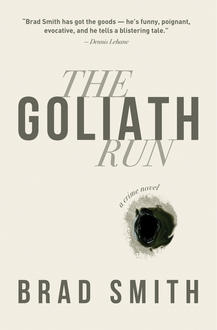 Interview with Brad Smith, author of The Goliath Run

With writing that rivals the great Elmore Leonard, author Brad Smith delivers his newest work The Goliath Run (At Bay Press), a poignant novel that sees a mother take fate into her own hands against the extremes of right wing politics after her daughter is killed in a mass shooting in a Pennsylvania schoolyard. Brad joins us on the All Lit Up blog to share more about tackling tough subject matter while remaining thoughtful, and what he is working on now.

All Lit Up: Congratulations on the recent publication of your book The Goliath Run! Can you tell us a little about the novel? Were there any books that influenced your writing when you were working on it?

Brad Smith: The book deals with a school shooting which then becomes fodder for an immoral TV talking head who intends to run for office. A woman, grieving over the loss of her goddaughter, intends to stop him. Were there books that influenced me? Not really. For this book I depended more on current events, talk radio (both right and left wing), daily newspapers and the nightly news. I don’t know of any other fiction that has addressed this problems in this manner.

ALU: You tackle a difficult subject in your novel – namely a mass schoolyard shooting and its devastating aftermath – but manage to refrain from making it exploitive. How did you remain thoughtful when writing about an unspeakable tragedy that’s inspired by an actual event?

BS: It was tough to do…tougher than I anticipated. I wanted to write about a school shooting without sensationalizing it. So I attempted to keep the actual details of the shooting to a bare minimum…and focus on the aftermath instead.

ALU: Can you tell us what it was like to write a character like Jo who takes extreme measures against a right-wing extremist like Sam? Was there anything cathartic about writing her?

BS: Yes, there absolutely was. I imagined Jo as somebody who grief was so overwhelming that she eventually HAD to do something. And Sam Jackson was the obvious target. If not for his nightly ravings – maybe Jo would have grieved silently forever. But not in this case.

ALU: Do you have another story in the works? What is the most challenging thing about writing a novel?

BS: I’m working on a book that takes place in the U.S. south during the Depression. It’s about the connection between moonshiner runners and the early stock car racers. The most challenging thing – I discovered many years ago – is to develop the self-discipline to do it. It’s not like a “regular” job, where you are required to show up and punch a clock every day. With writing, you have to punch your own clock! 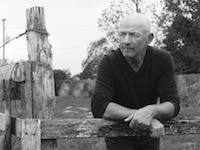 Brad Smith, writer born and raised in the hamlet of Canfield, in southern Ontario, a couple of hours from Toronto. After high school, he worked for the signal department of the Canadian National Railway for three years, and then got a chance to work on a rail project in South Africa. Upon returning from Africa, Smith worked all over the place - Alberta, British Columbia, Texas - at a variety of jobs. Farmer, signalman, insulator, truck driver, bartender, schoolteacher, maintenance mechanic, roofer, and so on. He became a carpenter and built custom homes in Canada. He still works as a carpenter when not writing. He now lives in an eighty-year-old farmhouse near the north shore of Lake Erie. His books have been published by Penguin Canada, Doubleday Canada, Simon & Schuster Canada and his forthcoming novel will be published by At Bay Press.

Thank you to At Bay Press and to Brad Smith for joining us on the All Lit Up blog.

Grab your copy of The Goliath Run >>