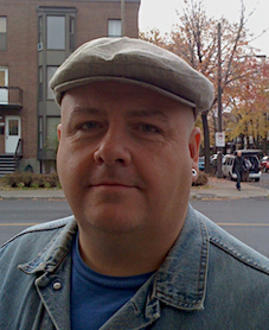 Montreal-based poet and surrealist Peter Dubé is this week's Indie Reading Room author with his newest  The Headless Man (Anvil Press), a gothic, picaresque prose poem, laced with horror and humour, that concerns itself with queer challenges to identity and sexual boundaries.

Scroll down for our Q&A with Peter where he tells us about the intriguing impetus behind his book (there's a secret society involved), his inspirations, politics in his work, and more. Then, head over to the  ALU Instagram for Peter's reading from his book.

Bonus: get 20% off  The Headless Man right here on All Lit Up with promo code READINGROOM until October 15!

Peter Dubé: The Headless Man grows out of my long interest in surrealism and its environs; in this particular instance the ideas and work of Georges Bataille. In the ‘30s Bataille founded both a Secret Society and a journal titled Acephale, meaning “acephalous” or “headless.” Little is known about the secret society itself, but the journal was publicly distributed and frequently illustrated with a nude, headless figure drawn by the painter Andre Masson.

From the moment I saw this figure I was fascinated. I looked at it over and over and started to do research. I came to see it as a monster or a kind of demigod, but also as a metaphor with vast range. I came to see the acephale as a powerful image of liberation: of the body freed from the domination of an instrumental reason, or, from a political point of view,  as representing the state as “body politic” freed from hierarchy, having no “head.” Finally, I discovered it referenced the “headless daemon” of the Greek magical papyri.

It suggested so much, and over the years my fascination grew into a mild obsession. In the end, I realized that having given so much thought to the image, I had to write a book. So I turned him into a character and wrote, imagining what such a figure might mean, or do, in the actual world. And now the book is here. 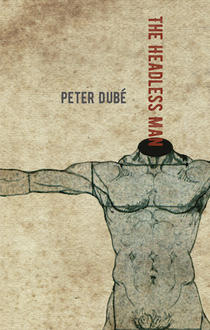 PD: Beyond writing fiction, poetry and essays, I also work as an art writer and am an editor at a contemporary art magazine, so the fine arts are constantly on my mind and undoubtedly have an impact on my imagination.

In addition, I am a film fanatic and view movies across the whole range of cinema from Hollywood classics, to experimental films, to documentaries, horror, and what was once called “arthouse” films. So, even as cinema has learned from the literary over the course of its history and development, I have looked to cinema to learn from some of its techniques and tools.

Finally, I am deeply interested in the situation of the world, which is to say the political, (I’m not sure how a serious person could fail to be in the current situation), and that surely influences me. One sees this show up in my work in oblique ways frequently, and sometimes in ways more clear. Certainly the politics of policing and sexuality leave very visible traces on my work.

PD: Since I am a voracious reader, this is a tough question to answer, simply because it’s hard to narrow it down.

If we are talking specifically about Canadian literature, I will say that I read Atwood’s The Testaments (finally!) and found it compelling. It’s a powerful, and credible, follow up to The Handmaid’s Tale while being wonderfully specific too. I was enthralled by Atwood’s subtle characterizations, particularly her ability to handle moral nuance and the problematic choices one is obliged to make in difficult situations.
Also Canadian, I’d like to draw attention to a marvellous recent collection of poetry: Beatriz Hausner’s Beloved Revolutionary Sweetheart. It’s sophisticated in conception and precise in language, and richly allusive, referencing history, mythology and the literary canons with skill and a light hand, all while weaving a thread of sexiness throughout. A remarkable book!

If we open the conversation up beyond Canada’s borders, Edmund White’s latest novel A Saint from Texas is a joy. The balancing of two narrative voices is superbly handled. The investigation of life led deliberately, as a kind of project, neglecting neither the rewards nor the dangers of such a choice, is both thought-provoking and a balm in a contemporary world so utterly out of control as to make meaningful choice seems nearly impossible. Equally wonderful, White’s eye for the telling detail is in full effect here!

ALU: What has been your most unlikely source of inspiration?

PD: What a tough question! I tend to find inspiration everywhere: in books and pictures, in long walks with no destination in mind, mere idle wandering, and in my relationships, of course. But none of those is “unlikely,” I think. So the answer to your question is, to be completely frank: a particularly naughty gay club in Paris in which I had some remarkable experiences and to which I have a special attachment.

ALU: If you were to write a memoir, what would the title be?

PD: In a curious coincidence, I have, in fact, recently begun to think about the possibility of a memoir, though I have no concrete plans for it yet. So my speculation here won’t be binding!
That aside, because of the kind of life I’ve led (happily!) any eventual title would have to be close to the emotional and philosophical content of this: “Why, yes: I’d be delighted!”

Peter Dubé is the author, co-author, or editor of eleven books, including the novels Hovering World and The City’s Gates, the short fiction collection At the Bottom of the Sky, the novella Subtle Bodies (a finalist for the Shirley Jackson Award), and Conjure: a Book of Spells, a collection of prose poems that was shortlisted for the A. M. Klein Prize. His most recent work is the short fiction collection Beginning with the Mirror. Peter lives in Montreal.

Get The Headless Man for 20% off on All Lit Up until October 15th with the Indie Reading Room promo code READINGROOM. Find Peter in the   ALU Indie Reading Room on Instagram, and stay tuned every Thursday until November 12th for   more author readings and Q&As!

October 10, 2020
In the height of quarantine, I reverted to my teenage self: An essay by Hana Shafi

September 28, 2018
Under the Cover: The Tourist’s Guide to Zolitude: the Tour Guide