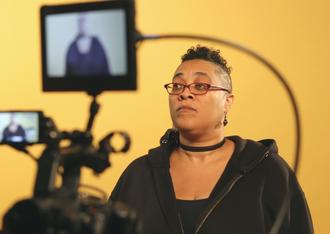 Playwright and emcee Donna-Michelle St. Bernard joins us in the Indie Reading Room this week with her newly published play Sound of the Beast (Playwrights Canada Press), a mashup of spoken word, storytelling, and hip hop that illuminates racial discrimination, the suppression of expression, and the trials of activism.

Read on for our Q&A with Donna-Michelle where she tells us about the Tunisian hip hop emcee Weld El15 who inspired her play, orange foods and superstition, her literary Mount Everest, and more. Then, head over to the  ALU Instagram for Donna-Michelle's reading from Sound of the Beast.

Bonus: get 20% off  Sound of the Beast right here on All Lit Up with promo code READINGROOM until November 12th!

Donna-Michelle St. Bernard: The book is based on an ever-changing performance work, the most coherent of many versions. A story that I read ran through me and left a mark, so I wrote my way through it, driven by my own experiences as an emcee in Canada.

A part of the 54ology, Sound of the Beast is inspired by Tunisian hip hop emcee Weld El15, whose rhythmic critique of government and police saw him repeatedly incarcerated. The impact of that story is woven into the way I consider insidious acts of state overreach large and small, the slope and how we are slipping, the powerful acts of individual agency that are possible even inside of a system designed to advantage others.

Told through hip hop, spoken word and story, we move through cypher, protest, dark alley and stage; it offers encounters with police (so many police), publics, promoters and crew. It’s a lot, and it’s also just what happened. Happens. 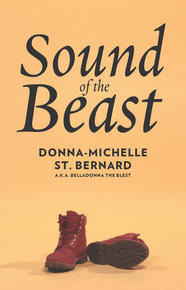 DMSB: I always approach writing a new project in a different way, but I do have predictabilities. If I think I have solved something, I will use my index finger to push my glasses closer to my eyes, mouth fixed in determination, because when they do that in movies then the plan works. Falling in love with a song I think my character would love, learning what it says about them, making it a part of me.

Candles. So many candles. A phantom’s-lair-worth of candles, hazardously placed, tempting a disaster that will justify getting up from my desk instead of just doing the work in peace.

Orange foods. This is a superstition, a holdover from high school, when we decided that orange-coloured foods were most intellectually stimulating at exam times. Carrots and cheesies bear equal value in this metric, as do good Canadian cheddar and clementines.

DMSB: So Long Been Dreaming is a BIPOC sci-fi anthology edited by Nalo Hopkinson that broadened my lens on speculative fiction. I return to these stories for the freedom I get from the range of approaches to storytelling, the distinct authorial voices that compel me to pursue the authors’ other works. I feel enriched by considering what we, in this moment, imagine the future to be, and from seeing what we, at some previous point, projected. These stories dwell in the human impact of aspiration, isolation, surveillance, familial estrangement, the subversion of structures and relocation of wealth. At this moment I’m reading a story called Panopte’s Eye by Tamai Kobayashi. 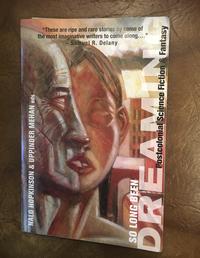 ALU: What is your literary Mount Everest?

DMSB: Poisonwood Bible by Barbara Kingsolver has been hard to reach the end of for some time now. At first it was because I had to stop for a big think partway through then, when I resumed reading, I ripped through the remaining chapters until I could see the end coming, and then I didn’t want the end to come. While I refused to finish it I wouldn’t stop talking about it, causing it to be commandeered by my mother, who is now reading it. By the time I get it back I will no longer be “in the vibe,” requiring me to start back at the beginning. This cycle has no foreseeable end. Whoever sent me this book, you got me. 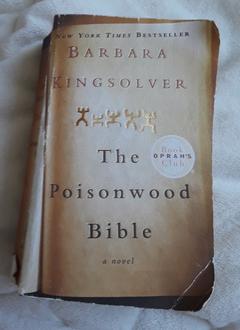 ALU: Tell us a fun fact about yourself.

DMSB: In high school, I was sent to the principal to account for my absence from classes. Unable to conceive of any positive outcome, I launched into the most outlandish lie I could. It started with a broken alarm, a missed bus, then escalated: a bear, a helicopter, international spies, my determined sense of civic duty...on and on. I must have worn her down. When I finally finished, she sighed without expression and dismissed me, stressing that I had escaped due to my entertainment value, not her credulity. And that is why I don’t know what consequences are. Fun.

Donna-Michelle St. Bernard is an emcee, playwright, and arts administrator. Her work has been recognized with a Siminovitch Prize nomination, SATAward nomination, the Herman Voaden Playwriting Award, the Enbridge playRites Award, a Dora Mavor Moore Award for Outstanding New Play, and two nominations for the Governor General’s Literary Award for Drama. She is the current artistic director of New Harlem Productions. She is based in Toronto.

Get  Sound of the Beast for 20% off on All Lit Up until November 12 with the Indie Reading Room promo code READINGROOM. Find Donna-Michelle in the  ALU Indie Reading Room on Instagram, and tune in next Thursday for our final author reading of the season.

February 23, 2017
Poetry in Motion: The Marvels and Oddities of James Lindsay's Our Inland Sea