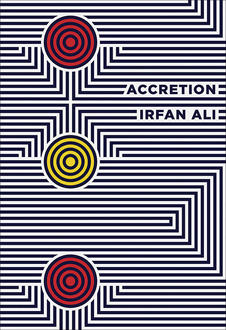 Irfan Ali joins us for ALU DiscoverVerse to chat about his newly minted collection  Accretion (Brick Books) — a debut inspired by the ancient Persian love story of Layla and Manjun — that considers the struggle of an immigrant family stuck between their cultural traditions and new life. Set in the crowded streets of Toronto, immersed in hip-hop culture, Accretion speaks to the chasms between people, the complications of human bonds, and the struggle of identity. Below Irfan tells us about writing his book and why editors should be praised, how religious philosophy inspires his writing, and reveals his roleplaying-game-nerd tendencies. Read on for our interview, and the poem "Staring at the Sun" from Accretion.

During the month of April, you can buy any of our featured   DiscoverVerse books for 20% off (+ we'll send you a set of three poetry bookmarks so you'll always find your place.)

All Lit Up: What did you learn writing Accretion?

Irfan Ali: Probably the most significant growth was in my writing itself, which improved exponentially over the course of the writing process. I put most of that on my amazing editor, Nick Thran. According to psychologist Howard Gardner’s influential theory on multiple intelligences (something familiar to the point of nausea to me in my other life as a high school teacher), I’m mostly an interpersonal learner, meaning I learn best through collaboration and sharing. Unfortunately, that hasn’t generally gelled well with the largely solitary pursuit that is writing. I feel that collaborating with Nick and being able to access his well of experience and expertise throughout the editing process hyper-accelerated my writing abilities. That’s evident to me not only in comparing the final version of Accretion with its earlier drafts, but also in the general quality of the writing I’ve been producing since. So basically, shout out to all the editors that tend to get resistance more than love from the writers they work with. For the record, I was probably far more in the resistant category than I’d like to admit.

There’s probably a couple of other significant learnings I could summarize here, but COVID-19 anxiety’s clouding my mind. I also learned what versos, rectos, and signatures are, so if any book printers are looking for interns post-pandemic, feel free to hit me up!

IA: I’m a bit embarrassed to admit that I probably get more of my inspiration from outside of poetry than within. Life is, of course, a boringly obvious source. That’s far more true of Accretion than some of my other writing; however, as the collection is an almost direct retelling of my last major depressive episode and the transformative epiphany it catalyzed.

Religious philosophy is another non-arts wellspring. Especially over the last few years, I’ve been heavy into the writings of two influential Islamic scholars: al-Ghazali and Jalal ad-Din Rumi (the same Rumi whose poetry, purged of its religious content in translation, is so closely associated with mindfulness in our Western societies). A major goal in my writing is to adapt the wisdom contained in these works for our modern, secular context, especially given the hostility our society tends to have towards organized religion. I’m not sure I have the skill to do that very well yet.

In terms of actual art, film, and music have probably been the most abundant sources. In the interest of brevity, I’ll just focus on two works that had clear impacts on Accretion. The first is Tokyo Story, director Yasujiro Ozu’s 1953 epic that is considered by some to be the greatest film ever made. Tokyo Story epitomizes one of Ozu’s key insights: that the most meaningful moments of our lives occur at the peripheries. As such, he often omits major events like funerals and weddings, choosing to focus instead on the seemingly less significant moments before and after. This philosophy heavily influenced the narrative of Accretion, which likewise excises the larger events in favour of the ephemera. Kendrick Lamar’s 2012 concept album good kid, m.A.A.d city had a similar impact on Accretion. Indeed, the collection closely follows the narrative structure of Lamar’s celebrated project.

ALU: If you were a character in a Choose Your Own Adventure story, what kind of quest would you be on? What three things would you have with you on your journey?

IA: As a huge roleplaying game nerd and lifelong fan of Ian Livingstone and Steve Jackson’s Fighting Fantasy series of Choose Your Own Adventure books, I’ve been waiting all my life to answer this question!

The quest, a la Ursula LeGuin’s A Wizard of Earthsea, would begin as a battle against a demon or other insurmountable foe until it’s ultimately revealed the monster is only my shadow self seeking to be acknowledged and accepted. Sorry if I spoiled LeGuin’s legendary novel for anyone, but that book’s over 50 years old and deserves to have been read by you already.

The three provisions I’d want for the journey would be a phoenix down feather, rope, and the alethiometer from Philip Pullman’s His Dark Materials trilogy. In the Final Fantasy RPG series, phoenix down feathers (stylized as “FenixDown” in the earlier games because of software restrictions on name length) are items used to revive characters when they’re killed. I feel that confronting and accepting a shadow self requires a sort of death and rebirth, making the FenixDown indispensable. At the end of his short story “Nawa” (“The Rope” in English), surrealist writer Kobo Abe observes that all human civilizations, even our earliest iterations, feature two tools: the stick to keep evil at bay and the rope to pull the good closer. I don’t think self-acceptance is possible in the absence of community, so the rope ensures that that good is always nearby. But ultimately, that battle is one that we face, at least in part, alone. And in the realm of self, where our trickster-like egos reign, it’s easy to give in to self-deception. The alethiometer, a compass-like truth-telling device, keeps us grounded in the difficult but necessary realities we need to face in order to triumph.

For the record, I’m a bit alarmed at how much of my inner geekiness I’ve revealed in this answer.

IA: You have died and, in the transition from this world to whatever comes next, you are only allowed to take one memory of this life with you. You don’t actually get to keep the memory itself, but instead a half-page poem that has to capture the essence of what that experience meant to you. Write that poem.

Full disclosure: yes, this is basically a rip-off of Hirokazu Kore-eda’s 1999 film After Life.

A poem from Accretion

STARING AT THE SUN

The pupil can only contract so much
before it shuts forever.
The phantom will remain
long after you blink.
They tell you not to stare
because all foolish dares
eventually beget tragedy.
Because pride has always
been deadlier than poison.

The eyes themselves will become supplicants.
They will strain for any release. 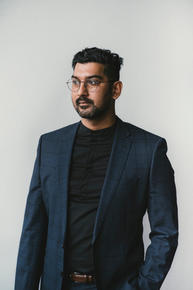 Irfan Ali is a poet, essayist, writer, and educator. His short poetry collection, Who I Think About When I Think About You was shortlisted for the 2015 Bronwen Wallace Award for Emerging Writers. Accretion is his first full-length work. Irfan was born, raised, and still lives in Toronto.

During the month of April, you can buy Accretion and any of our featured DiscoverVerse books for 20% off! PLUS: FREE shipping! 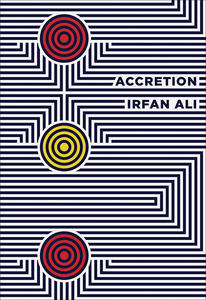 April 3, 2020
DiscoverVerse: Choose Your Own Poetry