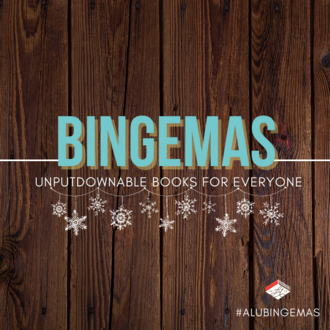 For the person on your list who follows up anecdotes with "It's from a podcast I listen to," today's BINGEMAS books are the perfect ad-free escapes when they need a little analog.

Give your giftee's ears a rest and their eyes a treat with two choice titles from Canadian indies— On Nostalgia (Coach House Books) and The Flood (Playwrights Canada Press)—and get 20% off until Dec 4th with promo code BINGEMAS20 (enter at checkout).

Reply All = = = = On Nostalgia by David Berry (Coach House Books)

Hosted by PJ Vogt and Alex Goldman, popular Gimlet Media podcast Reply All has taken a simple premise—a show "about the internet"—and built compelling, mystery-like episodes around fairly mundane internet-related incidents. Episodes range from serious investigative pieces to silly discussions about memes and other pop culture phenomenon. Similarly, cultural critic David Berry starts with a single subject—nostalgia itself—and offers a deep dive into how what started as a psychological diagnosis of soldiers abroad has become a quintessentially modern condition. In a collection of essays, Berry considers pop culture, politics, and psychology to explore the need for nostalgia and our urge to look back with rose-coloured glasses. On Nostalgia reads like a perfect episode of Reply All—well-researched, conversational, and intelligent.

Falen Johnson and Leah Simone Bowen's CBC podcast The Secret Life of Canada spotlights the people, places, and stories that you probably didn't learn about in school. With episodes titled "Toronto vs. Everyone" to "The Secret Life of Canadian Snacks," Falen and Leah Simone uncover the real, relatively unknown Canadian history that would've definitely made history class more interesting. Follow up your giftee's podcast listening with a dose of Canadian drama by co-host Leah Simone. Inspired by true accounts, The Flood is a gripping play about a group of women inmates trapped in the basement prison below Toronto's St. Lawrence Market—which used to house the city jail—as the icy waters of Lake Ontario pour into their cells. Your giftee will be so absorbed by the little-known stories of early female prisoners in Canada they'll follow up conversations with "I read it in a play" for a change.

July 21, 2020
Under the Cover: Sleuthing the cover art of Wind Leaves Absence

August 23, 2016
Where in Canada: Strolling around the Plateau Mont-Royal