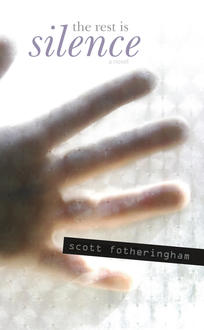 If a cabin in the woods to retreat from the city grind is your dream, you'll find your place in Scott Fotheringham's atmospheric novel The Rest is Silence (Goose Lane Editions). Equal parts environmental meditation and page-turner, the novel follows one man's self-enforced exile to the backwoods of Nova Scotia and the impending doom of a secret that's about to be uncovered. Much like his protagonist, Fotheringham traded in the city life for the sanctuary of the North Mountain in Nova Scotia, a place that informs much of the striking setting in The Rest is Silence.

I lived for a while on 250 acres of forest on the crest of the North Mountain in Nova Scotia. There was a clearing by the road, littered with stumps and rocks poking through the soil. Nobody had lived on that land. Why would they when the Annapolis Valley lay at the base of the mountain, with its deep alluvial soil? Even though my gardens were less than a spade deep in many places, they were rich—the result of centuries of tree roots pulling up minerals and communing with fungi, reaching for the sky, shedding leaves and needles, branches and bark, then laying it all down to rot in the absence of human witness.

It was a funny time in my life. I was trying to find my way between ten years of university and all the hoop-jumping that went along with that and, well, I didn’t quite know what. What I did know was that I wanted to live on land I could touch, having recently come from the bustle and grime of Manhattan. I bought the land from a logging company that had taken every large tree but had left enough small ones that it felt like a forest, at least to me and the woodpeckers, coyotes, and deer that I shared it with for a few years.

I loved that place like nowhere else I’d lived because of the tranquility of living alone in the woods, a half-mile from my nearest neighbour. There was the sense, when I woke to pee under the moonlight of a still, bitter winter night, feeling the cold on my feet, that I was alive in a way that I did not feel when I was insulated from the elements. I loved lying in a bunk I had built, under a tiny window that I opened if the woodstove was stoked too full, listening to the Barred owl somewhere out there on my land. At those times, though, the quiet was tinged with anxiety, as if being there reminded me that I was lost, unsure of my way out of the woods.

That ancient mountain ran between the valley and the Bay of Fundy, from Cape Split to Brier Island. It had once been attached, hundreds of millions of years ago, to either Morocco or what is now South America. Its volcanic rock had been ground down by the winds off the salt water, by ice sheets advancing and retreating, by the rains from November to May, until it stood a mere three hundred metres above the sea. Having hiked in the Rockies, I might have scoffed at that so-called mountain, but I wasn’t so lost that I didn’t know it was tougher than me and had been around a lot longer, and travelled a lot further, than I ever would.

I used to bike with my dirty clothes in my backpack down the mountain and through the valley into the little town of Middleton. On the way I passed an abandoned bottling plant in Spa Springs. A spring was somewhere just off the road, with healing waters that had been used by Mi’kmaq long before the British arrived to take their land. The English built a grand hotel and spa there during the 19th century that hosted thousands of European tourists, including a future king. There was an optimism in Nova Scotia that it was at the centre of this new imperial enterprise. But then the hotel burned down, and the tourists stopped coming. In the 1970s, a German consortium got provincial promise-us-you’ll-make-a-few-jobs-for-locals funding to build the water bottling factory. They took the money, built the plant, but never opened it. Spa Springs became another of the rural communities whose residents melted into the city.

The water I drank on my land was pulled deep out of the bedrock of the mountain with a solar-powered pump that I installed. Rainwater had taken decades to sift through that rock from the surface, meaning that it was–at least, this is what I liked to believe—some of the purest water left on the planet. It came from a time before pesticides, before acid rain, before plastic. And since I was directly uphill from it, I imagined that my land was the source of that spring’s healing water.

It cracked my heart to leave after my last full year on that land because I knew I would have a hard time ever feeling that alive again. It comforts me that the mountain is still there, minding its own business, offering a sanctuary to whatever chooses to call it home.

Thanks to Scott Fotheringham for this engaging portrait of the North Mountain in Nova Scotia and to Nathaniel Moore at Goose Lane Editions for connecting us. The Rest is Silence is available on All Lit Up. For more Where in Canada, click here.

On the Search for a Great Graphic Novel