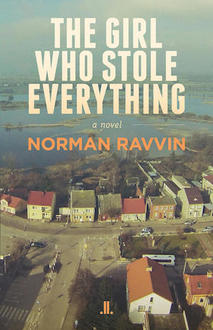 Where in Canada: The Girl Who Stole Everything

Travel from contemporary Vancouver and Poland, to a New World city and an Old World countryside with Norman Ravvin's The Girl Who Stole Everything (Linda Leith Publishing). Discover more about how Vancouver's east-side streets set the backdrop for this novel, revealing the relationship between prewar Polish shtetl life and Jewish lives today.

See more details below
Tagged: the girl who stole everything, linda leith publishing, where in canada, norman ravvin

Vancouver breaks into its west and east sides at Cordova and Carrall Streets, on a corner that’s seen good and some bad. In a recent video, Anishanaabe artist Rebecca Belmore gets down on the pavement nearby and scrubs using a bucket of soapy water, as if the area is in need of drastic reclamation from the ground up.

The last time I strolled on Vancouver’s once-upon-a-time Bowery I nearly got punched in the head, but that was the first mishap I’d ever had there.

In The Girl Who Stole Everything, Nadia Baltzan is in search of family history when she sets herself down just off Cordova and Carrall to play Polish Jewish music and Joni Mitchell chestnuts on her dulcimer.

Cordova, like so many of Vancouver’s downtown east side streets, is under repair and transformation today.  What’s known colloquially as Blood Alley – directly across from where Nadia settles with her instrument on her knees – is one of the city’s hollowed out sites slated for redevelopment as upscale condos and social housing.  A few blocks away is the reworked Woodwards building, where families once shopped for shoes and dining room sets.  Tucked away inside its redeveloped structure is Vancouver artist Stan Douglas’ gigantic photographic rendering of the riot, circa 1971, that pitted hippies against cops in a free-for-all at the corner of Abbott and Cordova.

It is entirely forgotten today that these streets were once a part of an early ethnic enclave, alongside Japantown on Powell and nearby Chinatown.  On Cordova in the 40s, 50s, and 60s there were thriving Jewish-owned businesses – fish shops, pawn and loans outfits, booksellers and junk dealers – owned by families who were only a few decades removed from their eastern European homes.  The kingpin among these businesses, straddling streets and advertising on every free red brick painted wall, was the one that remains today, the Army & Navy store.

What must it have been like for all those hardworking people, in wartime, to watch the local police and city government busily remove their Japanese neighbours to the interior in the name of national security?

West Cordova is a time capsule – a purely Vancouver mix of the wildly new and the resolutely lost in time.  What a visitor notices as she strolls there now depends on what she’s looking for: designer pizza, or the skid road leavings of a forgotten piece of Nadia Baltzan’s family history.

The Girl Who Stole Everything takes the reader to contemporary Vancouver and Poland; to a New World city and an Old World countryside.  We first meet Nadia as she gazes with a friend at the dark night waters of Coal Harbour and tries to convey what she’s searching for. But her companion’s not listening.  It’s up to us to follow her as she makes her way along Cordova.

Explore the ALU blog for more Where in Canada >>

The Girl Who Stole Everything

October 27, 2015
Where in Canada: A Vancouver of eternal rain