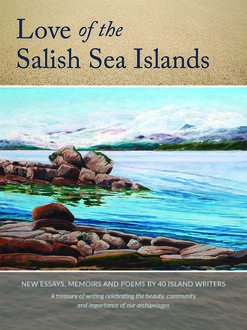 For World Environment Day we asked publisher Mona Fertig of Mother Tongue Publishing about her new collection Love of the Salish Sea Islands, a collection of memoirs, essays, and poems from forty celebrated and award-winning island writers in celebration of the islands and waters of the Salish Sea. Below she tells us more about the collection and shares excerpts from a memoir, poem, and essay included in the anthology.

The islands in the Salish Sea on the west coast of Canada, are widely recognized as a region of international ecological and cultural significance, and considered one of the three most threatened ecoregions in Canada. Islands are unique de-centralized lively communities with diverse indigenous, settler and outsider histories. They are little refugias in the glacial landscape of urbanization—ecological and cultural. After several years of thinking about it, I decided to find and gather island writers (not an easy job) and publish this unprecedented anthology in celebration of the islands and waters of the Salish Sea.

There are over 500 islands in the Salish Sea Salish. The Salish Sea includes the Strait of Juan de Fuca, the Strait of Georgia, Puget Sound, and all their connecting channels and adjoining waters, between the Gulf Islands in British Columbia, Canada, and the San Juan Islands in the U.S.. The name was officially approved by the British Columbia Geographical Name Office and the United States Board on Geographic Names in 2010. 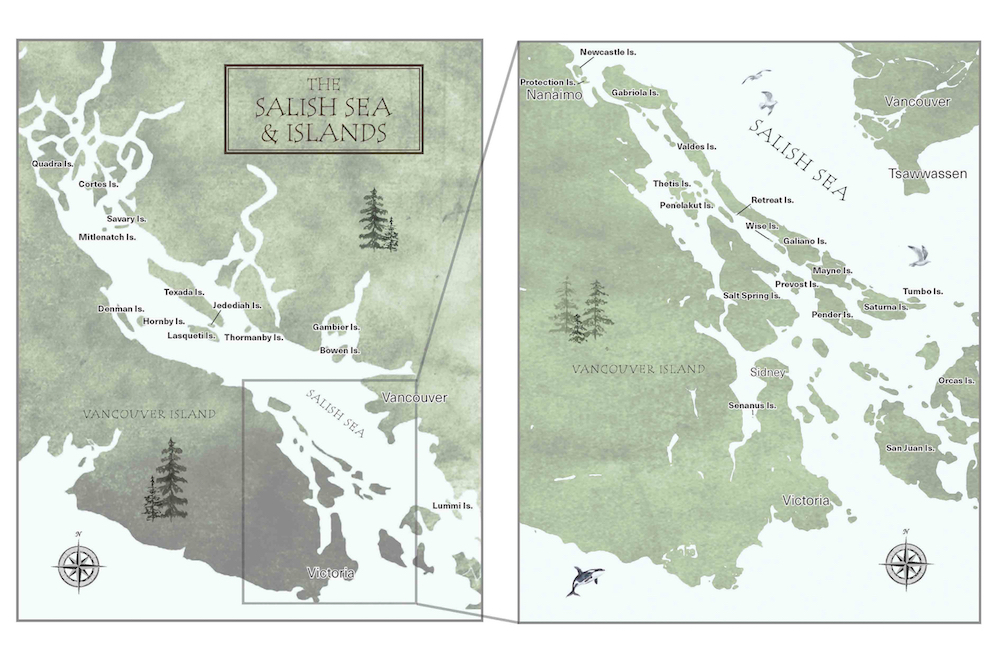 Excerpts from Love of the Salish Sea Islands

I first packed for my friend’s cabin on a remote south-facing point of Gambier Island when my children were four and six. Our kit list was simple: food, drink, bedding, clothes and toiletries. Everything had to be easily portable for walking on the ferry and then taking a water taxi. Fortunately, we no longer needed diapers (nor the hassle of taking soiled ones home since there would be no garbage pickup or washing machines). With two young children who could only manage their small travel bags, I had the challenge of packing the rest in my backpack, a cooler and a grocery box.

When I learned there would be another visitor traveling with me—a graduate student in his twenties—I imagined that he would carry only a backpack, leaving his hands free to help me. Surprise, being from Kerala State in southern India, he was a strict vegetarian and found it imperative to bring not only the familiar rice, lentils, yoghurt and vegetables that he knew and loved but also his pots and other utensils, so that his meals would not be contaminated by our North Americans’ meat preparations. It looked like getting to Gambier Island with our boxes and bags was not going to be easy. However, our new friend was not only strong but positive and smart. He had the foresight to bring a wheeled carrier, upon which we stacked our gear and easily rolled it onto the vessels. After paying $20 per person for the water taxi (a big gulp for a foreign grad student and a single-income family), we were on our way. There was no charge for accommodation, so we would be home free!

And it was free. In fact, if we had a million dollars, we couldn’t spend it, as no shops, attractions, rides or museums were in any feasible distance from our location on a rustic site surrounded by lapping water, deep forest and stunning mountain peaks. Isolation turned out to be one of Gambier’s best features.

Our first night, before we would rummage

in the woods to gather the makings of an altar

for the mossy slope where we would say our vows,

I stood outside our small rooms and listened into the dark,

listened to a sound I had never heard before

that lifted from below the cliff edge

in the waters I could not see.

In the morning we sat silent beside our altar,

and looked past the world of no horizon.

Then we said what no one else would hear.

This is when they came,

five of them together. They rose

up out of the waters below us

with the whoosh I heard now for the second time.

“Yes,” they sounded—again and again.

Then they made a circle, a perfect ring

to help us seal our vows before they dove

to where they no longer could be heard or seen.

For me, Saturna is less a place defined by maps than it is a series of enigmatic palimpsests, an awareness of otherness, of dimly apprehended revenants, of older narratives that slowly surface through the glossing of history. A palimpsest is a parchment on which a previously erased or obscured text can be read through what’s written over it, the old story mysteriously revealing itself behind and underneath the new telling. The names on island maps themselves are a palimpsest. The Salt Spring of this generation was the Saltspring of settlers and before them it was the ĆUÁN of the W̱SÁNEĆ People. The Saturna of settlers was the Saturnina of the Spanish and the ṮEḴTEḴSEN, “Long nose,” of the Tsawout, or SȾÁ,UTW̱ as they call themselves in the decolonization of language.

As a very young man, I once talked with a very old SȾÁ,UTW̱ woman. She told me on which beach the first of her ancestors had landed maybe 4,000 years ago; told me their names; told me how her grandparents, who still spoke only SENĆOŦEN, would take her, as a tiny girl, by dugout canoe through the islands and stop at ṮEḴTEḴSEN. The journey was to visit relatives on Lummi Island, W̱LEMMI, the mouth of Bellingham Bay on the American mainland. They had moved there from W̱SI,I,KEM—Tseycum Harbour—on the Saanich Peninsula to escape raiding by northern peoples. She emphasized how utterly discombobulating it was when United States Coast Guard patrols began stopping them during Prohibition almost a century ago and her grandparents suddenly discovered that half the family was now living in a foreign country without having had any say in the matter.

Christina Johnson-Dean has been going to Gambier Island since 1985. She has written three books for Mother Tongue Publishing’s Unheralded Artists of BC series on artists Ina D.D. Uhthoff (finalist for the City of Victoria Butler Book Prize), Edythe Hembroff-Schleicher and Mary Filer. Originally from Berkeley, California (where she graduated from UCB in history and art), she completed an MA in History in Art at the University of Victoria, resulting in the B.C. Archives publication The Crease Family: A Record of Settlement and Service in British Columbia. She resides in Victoria with her husband; they have two daughters and two grandchildren.

Peter Levitt has published seventeen books of poetry and prose, including translations from Chinese, Japanese and Spanish. Legendary poet Robert Creeley wrote that Peter’s writing “sounds the honour of our common dance,” and in 1989 Peter received the Lannan Foundation Literary Award in Poetry. He is the associate and translation editor of the Zen classic, Treasury of the True Dharma Eye: Zen Master Dogen’s Shobo Genzo, and has translated and edited other Zen books, including work by Thich Nhat Hanh. He lives with his wife, poet Shirley Graham, and their son, on Salt Spring Island where he is the guiding teacher of the Salt Spring Zen Circle.

Stephen Hume came to the Salish Sea more than 70 years ago. He and his wife bought land on Saturna Island over 40 years ago, built a house and lived there in the early 1990s. He now lives near ṮEUWEṈ on the end of the Saanich Peninsula overlooking Satellite Channel. Hume has written twelve books of poetry, essays, natural history, history and biography. His most recent is A Walk with the Rainy Sisters, Harbour Publishing

Thanks to Mona at Mother Tongue Publishing for sharing this gorgeous collection with us. You can purchase Love of the Salish Sea Islands on All Lit Up. For more Where in Canada,  click here.

Love of the Salish Sea Islands