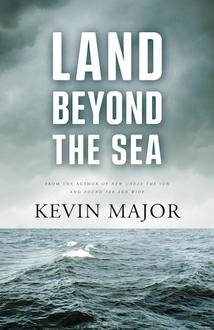 Land Beyond the Sea (Breakwater Books) author Kevin Major breathes life into the cold statistics of war by taking us deeper into the story of the SS Caribou, a Nova Scotia to Newfoundland Ferry, sunk by German U-boat during World War II, resulting in the death of 137 passengers and crew.

See more details below
Tagged: land beyond the sea, kevin major, breakwater books, where in canada

When I first considered writing a WWII novel based on the sinking of the Nova Scotia to Newfoundland ferry by German U-boat 69, I recalled a framed commemorative poster that was commonly hung in Newfoundland homes in the years following the tragedy. In its centre was a photograph of the S.S. Caribou in her prime and, surrounding it, oval photographs of the 31 members of the crew who lost their lives. There was only one woman – Bridget Fitzpatrick. There were six sets of brothers. They included the First and Third Officers, sons of the Captain, Ben Taverner, who also went down with the ship. In the ferry’s home port of Port aux Basques the sinking would leave behind 21 widows and 51 children without fathers. In total 137 passengers and crew perished at the hands of the man who fired the torpedo.

Sometime later in my research, I was sent from Germany a photograph of the Commander of the U-boat, 26-year old Ulrich Gräf. He didn’t look particularly villainous. The Internet provided me with images of U-69, in port, prior to setting off into the North Atlantic. The crew were obviously proud of their submarine. My research yielded one statistic I could not erase from my mind – fully 75% of the Germans who crewed U-boats did not survive the war. On their very next patrol Gräf and his crew of 45 would form part of that statistic.

There were most definitely two stories to be told.

The statistics of war, like the North Atlantic where these crews played their roles, can be cold and passionless. It would be the author’s job to get behind the statistics and give life to the people whose fate came together that October night in 1942, just 20 nautical miles from the Caribou’s home port. I wanted to be fair in my depiction of these real people, based on all I could know of them. In the case of those aboard the Caribou, a commission of enquiry and interviews with survivors revealed a great deal. In other cases, such as the subordinates aboard U-69, it was often no more than a name, birth date and rank. I dug deeper, into numerous firsthand accounts of life aboard a u-boat. I travelled to the museum in Chicago which houses one of the very few of them still in existence and spent hours inside it, imagining what weeks and months of confinement in this cigar tube could possibly have been like.

Generally I knew some things, but not enough, to make these people characters in a novel. I would steep  Land Beyond the Sea in my imagination, a well-informed imagination. And to round out the novel, I would add other characters that were complete invention.

Most authors of historical fiction strive to be accurate in the factual details. But research has its limits. In the end we merge fact and fiction, and in doing so aim for the stronger truth that can emerge when the two join forces.

Governor General Award winner Kevin Major has published 17 books, for both young people and adults. His first, Hold Fast, is considered a classic of Canadian young adult fiction, and was recently released as a feature film. No Man’s Land, about the Newfoundland Regiment in WWI, was published in 1995 to much acclaim. Major’s adaption has been brought to the stage by Rising Tide Theatre for more than a dozen seasons.

A history of Newfoundland and Labrador: As Near To Heaven By Sea was a Canadian best-seller and finalist for the Pearson Non-Fiction Prize. Ann and Seamus, a verse novel, was shortlisted for a total of ten awards. It has since been turned into an opera, which has been performed internationally.

Find more Where in Canada on the ALU blog >> 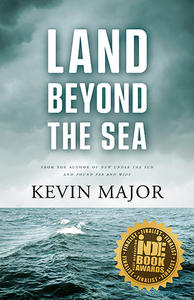 July 13, 2015
Where in Canada: Discover Newfoundland and Labrador with this new field guide