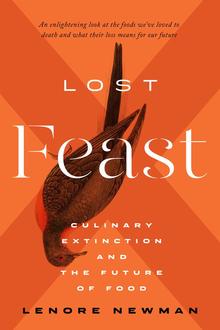 In Lost Feast (ECW Press), food expert Lenore Newman delves into the history of the foods we have literally loved to death, impacts of industrialized agriculture on the food we produce, and what that means for our food future. Below, Lenore tells us about her research into culinary extinctions, the present state of the global food system, and what a bird named Martha had to do with it.

I wrote Lost Feast because of a bird named Martha. She was the last passenger pigeon in existence; her death at the Cincinnati Zoo on the afternoon of September 1, 1914 marked the first time in human history that we watched a species fall into extinction. How, I wondered, could we have possibly erased the most plentiful bird of all time from existence? There were once over five billion passenger pigeons on Earth, two out of every five birds on the entire planet. A little digging in archives revealed the uncomfortable truth: we ate them all. And the passenger pigeon was not the first species nor the last to fall to our insatiable appetite. But five billion birds. That was a lot of squab.

Martha’s ghost flapping at my ears, I set out to explore the species that vanished thanks to our need for a good solid meal. Unravelling the culinary extinctions of the past took me deep into forgotten collections of yellowed manuscripts and through the collections of storied museum. Upon my first encounter at the British Museum of Natural History with the skeleton on a Moa, the giant bird beloved by the Maori as barbeque, I whispered “she looks just like Big Bird." I turned around only to discover I was surrounded by small children and angry parents.

I prowled the remains of the great market halls of gilded age America, taking time to sample as much regional cuisine as possible. Seckle pears, salted buttermilk, contentious “best” New York bagels. I drove far into Canada’s North to see free roaming bison, to feel first-hand the living remnant of a species driven right to the edge of extinction. The urge to sink my fingers into their thick fluffy manes was offset by the sure knowledge that if irritated they could crush our car flat.

Understanding the present state of the global food system should have been easy by comparison. The problem was access. Entry to factory farms is tightly controlled both to protect the animals from disease and protect the general consumer from seeing how today’s protein is produced. As an industry insider, I managed to talk my way into a few places the public usually never sees. In Lost Feast I explore how the mass production of chicken replaced wildfowl on the American plate; in an industrial chicken facility I came face to beak with a flock of a hundred thousand birds. However, there were no trees buckling under the weight of nests; just wire cages, six birds to a cage. The most striking feature was the silence.

I’m an optimist. After searching for the vanished foods of the past, and facing down the glaring shortcomings of the foods of the present, I resolved that Lost Feast would also look firmly towards the future. In San Francisco I talked to the scientists ushering in a new age of food: hamburgers grown in vats, masedon gummy bears, milk made through fermentation rather than cows. Will the future be plant-based? Seeing what the science can do already, I suspect ultimately.

I’m shocked by how much writing Lost Feast changed the way I approach food in my daily life. I’m eating vegetarian these days, and putting a lot more plants on the menu. I love Bluefin but can’t imagine eating one now that I know they are on the brink. I’m seeking out farmers who grow diverse older varieties, and I keep up with the latest advances in food sciences. And now when I see a honey bee, instead of shoeing them away I ask them if they need anything. Water? A new flower garden? A lobbyist in parliament? I argue in the book that we can, as individuals, have a part in reforming the food system. Since writing Lost Feast, I’m doing my part, one plate at a time.

Lenore Newman is the Canada Research Chair in Food Security and Environment at the University of the Fraser Valley. She is the author of the acclaimed Speaking in Cod Tongues: A Canadian Culinary Journey. She divides her time between Vancouver and Roberts Creek, British Columbia.

Thanks to Lenore for giving us some food for thought and to Leah at ECW Press for connecting us. Lost Feast is available now on All Lit Up.