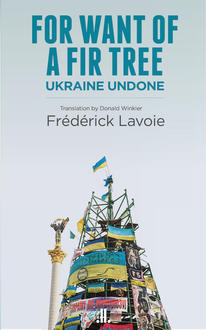 Under the Cover: For Want of a Fir Tree

In recognition of World Day of Social Justice (February 20th) we're taking a look under the cover of  For Want of a Fir Tree: Ukraine Undone  (Linda Leith) by Frédérick Lavoie, translated by Donald Winkler. Inspired by the Russian dismantling of the Crimean Peninsula, this cautionary tale delivers the devastating reality of a country torn from peace, desperately searching for reason amidst the ruins of war.

Late in February 2014, Russia began rolling tanks into the Crimean Peninsula, capturing strategic sites and taking over parliament. A month later Putin annexed the Ukrainian territory and declared it part of Russia. How can a country at peace be suddenly plunged into war? What compels peaceable citizens to take up arms and kill one another? In For Want of a Fir Tree: Ukraine Undone, Frédérick Lavoie tells Artyom, a four-year-old child he saw lying in his coffin on a January afternoon in 2015, about the sequence of events that led to his death.

The conflict still hot, Lavoie navigates explosions and road blocks to speak to journalists, soldiers, grieving parents, and politicians. With no agenda except to understand the seemingly incomprehensible, For Want of a Fir Tree is an unflinching look at a land drawn into conflict through misadventure, misjudgment, mistrust, and a legacy of historical resentments. It is a cautionary tale whose truths and lessons resonate far beyond these specific events, these particular borders.

Lavoie approaches his subject matter with the curiosity of a student, the eyes of a journalist, and the heart of a poet. Winner of the 2018 Governor General Award for non-fiction for a subsequent book, this is the first time the Montreal author is translated into English.

The following is an excerpt from  For Want of a Fir Tree:

You’re collateral damage, Artyom. Nothing more, nothing less. No one wanted your death, but you died anyway. You must be asking yourself why. You were just the right age for “whys.” So I’m going to explain it to you. I’m going to explain why on January 18, 2015, at 8:10 in the morning, on 5 Ilinskaya Street in Donetsk, your life was cut short after four years, four months, and fourteen days, by an error in the trajectory of a Grad rocket, without it altering in the least the course of the war. But I’m warning you right away: none of my explanations will be able to silence the tireless outflow of your “whys”. Nothing that I recount will carry enough meaning to satisfy your simple childhood logic. There is no “because,” no historical, political, or military argument, no virtuous feeling of moral superiority on the part of this war’s protagonists, the protagonists of any war, that can justify, even in part, the usurpation of your right to life. You were innocent and you remain so. They were all guilty and they still are. All those who have reached the age of reason and who continue despite everything to celebrate death, to promote hate, to promulgate what is false, to load weapons and hope for anything but the unconditional termination of combat.

It’s to you, Tyoma, that I want to relate what I’ve seen, learned, and felt in Ukraine, parading my naive, childlike “whys” before the annihilation of man by man. You won’t understand everything, of course. The absurd is a concept that one can only begin to grasp at the age of eight or nine. But at least you won’t try to justify the unjustifiable in the name of an ideal or a flag, to view all the complexities as a simple Machiavellian plan on the part of the enemy. You will perhaps understand that a sequence of events can be logical without being planned by anyone in particular; that your country was able to drift from peace into war in the space of a few months through an absurd set of circumstances that on one side and the other, blinded by a thousand and one petty considerations, no one was able to defuse. You will see that war is a trap into which human nature can easily allow itself to fall.

It goes without saying that you didn’t deserve to die. You at least deserve to know what led to your death. 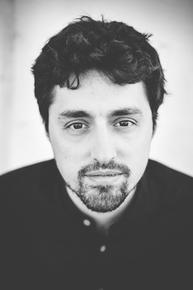 Frederick Lavoie is a freelance foreign correspondent born in 1983 in Chicoutimi, Canada. He has been working for numerous media in Canada, France, Belgium and Switzerland. He was previously based in Moscow (2008-2012), Mumbai (2012-2014) and Chicago (2014-2016). He is also the author of Allers simples: aventures journalistiques en Post-Soviétie (2012), recounting his years of reporting and travels in Russia and other former republics of the Soviet Union, and Avant l’après: voyages à Cuba avec George Orwell (2018), in which he explores nowadays Cuba and investigates the circumstances of the release of Orwell’s classic Nineteen Eighty-Four in communist Cuba.

His critically acclaimed Ukraine à fragmentation (2015), the French edition of For Want of a Fir Tree, was shortlisted for the Prix des Libraires 2017. He currently divides his time between Montreal and Mumbai.

Special thanks to Leila at Linda Leith Publishing for sharing this piece with us. For more  Under the Cover, click here. 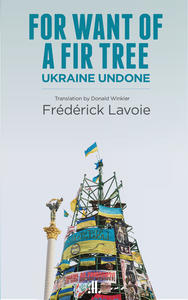 For Want of a Fir Tree

On the Search for a Great Graphic Novel