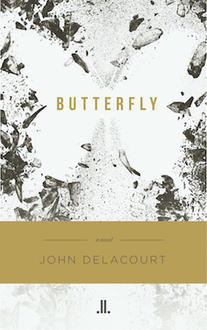 Under the Cover: Butterfly

Author John Delacourt takes us behind the scenes of the design process for the cover of his latest novel  Butterfly (Linda Leith Publishing), functioning to tell the story of the novels main character Natasa, who is forced to flee after the Toronto artist she models for is suddenly murdered. 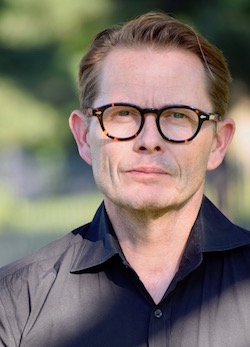 Each of the three novels I have published has a connection to a question prompted by my experience of visual art. I did not set out to serialize my interests in this way. It has something to do with what Martin Gayford writes in Modernists and Mavericks: “pictures are affected not only by social and intellectual changes but also by individual sensibility and character.” I would also include images produced from film. To me these represent the most profound expressions of sensibility and character - a novelist’s primary materials from which a story comes.

I have fretted and even outsourced a designer for one novel, apologizing to the publisher because I realized I had become that kind of writer. Yet the image chosen for the cover, indeed all the crucial components of the book’s design, will be on a shelf somewhere long after you’re in the ground or incinerated, hoping for another reader. As the Clash’s Paul Simonon said, explaining his taste in clothes, “if you get hit by a bus, you don’t want to be found wearing a pair of flares, do you?”

Butterfly is about Nataša Ružić, an artist’s model, who hopes to overcome the trauma of her past in wartime Bosnia to emerge with a new identity in Canada. Yet in this escape, she is afraid of her own image being taped or recorded as she makes her way across the country. She alters her appearance in an attempt to elude recognition by the police (the novel is set in 2003, before the prevalence of iPhones and CCTV transformed public and private spaces). The recorded image will fix her in time, pin her like a butterfly on baize, and she has much to accomplish before she presents the new Nataša to the world. The narrative leads to an ultimate image of her. The physical fact of the novel itself required that same powerful image that encapsulated her story.

What I managed to source (from that surprisingly rich treasure trove, Getty Images) captured, in the shattered glass surrounding a butterfly silhouette, the jagged, tragic result of this attempt at metamorphosis. The silhouette of a butterfly is like a visual rhyme of the shape of a heart as well. The powdery, broken glass is a vivid evocation of how Nataša’s heart could not be made unbroken. I knew there could be no other image than this one.

Linda Leith’s design team then found a way, with their choice of colour and tone, to make something regal from this stark, shattered remnant. They found beauty in the broken, which is all I hoped for in telling Nataša Ružić’s story.

A big thank you to Leila at Linda Leith Publishing and John Delacourt for sharing more about Butterfly with us.

Discover more Under the Cover >>

December 14, 2016
Read This, Then That: A Double-necked Guitar of Rock Reads