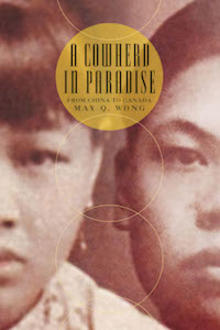 We're diving under the cover of May Q. Wong's A Cowherd in Paradise (Brindle & Glass Publishing), which follows the story of May's own parents, forced to live apart for 25 years during their marriage due to a Canadian law (between 1923 and 1947) that prevented Chinese immigration to Canada. May shares more about how, through memory and historical documentation, she was able to piece together her family's past and the very different hardships her mother and father faced as a result of legislated discrimination.

See more details below
Tagged: a cowherd in paradise, may q wong, under the cover, brindle & glass 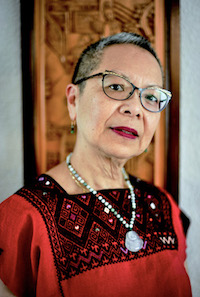 Partway through writing the manuscript, I ran into a wall. The story was about a couple forced to live separately because of a Canadian law (1923–1947) that closed the doors to Chinese, and only Chinese, immigration.The couple in question were my parents, and although unique in some of the details, their story was representative of thousands of other Chinese-Canadian families. I knew my mother’s story quite well, but I was missing some key details about my father’s life, which would better balance the book.

My parents were married for over fifty years, but they only lived together permanently for the last half of that time. When they re-united, they only stayed together because of their children, seven-year-old Robert—and me, their surprise “welcome to Canada!” baby. As I grew up, I became their communication conduit. 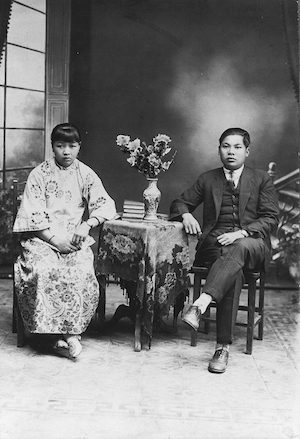 I was the only child Daddy watched grow from birth to adulthood, so he doted on me. Almost ten years had passed since his last brief experiences of fatherhood. He had had a confusing relationship with his daughter whom he met for the second time since her birth thirteen years earlier, and the rest of his fifteen-month stay in China had been focussed on his newborn son.

Daddy worked nights and came home just as my brother headed off to school and about the time I woke up. The time in the mornings before Daddy went to sleep was our time. He regaled me with Chinese folk tales and told me only light, amusing stories when I asked about his life before settling in Montreal. But later he would share some of his darker memories with my husband Michael, when my parents stayed with us for our wedding. 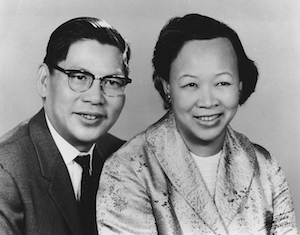 Mommy revelled in talking about her life in China. Her experiences during that time and place were so harrowing and dramatic, I could visualize them as a movie. My mother came to Victoria, a place she always referred to as “paradise on Earth,” to live the last sixteen years of her life with me and Michael. In the eight years we had been apart, Mommy had been widowed and had spent a year in China with my sister and her family. It was during this final decade and a half that I actively sought out the stories that had defined my parents’ lives. My sister and her husband lived with us on a number of extended visits from China. In the evenings, as my sister massaged Mommy’s body, they would reminisce as I recorded their stories. I learned about the mother my sister knew. Twenty years my senior and the smartest in the family, my sister knew so much more than me, except when it came to our father. As an adult, she had spent less than a month with him, on his last visit to China. Mommy recounted what he had told or written to her, and I could contribute my own memories about Daddy.

In the early years leading up to the 2006 Federal Apology Statement, Mommy and I discussed her preferences for compensation. It wasn’t until she gave me Daddy’s Head Tax receipt that I learned how he had come to Canada, and I looked up a copy of the ship’s manifest. His part of the story was building by bits and pieces.

My mother thought it important for me to write a book about how their lives had been impacted by the discriminatory Canadian laws, to prevent this kind of thing happening to others. But it was not until after she had passed away that I could bring myself to write the stories. I took early retirement in 2004, enrolled in Continuing Education writing courses at the University of Victoria, read books about writing memoirs and creative non-fiction, and submitted to (and was published in) various magazines to test my writing skills.

At first, I focussed on Mommy’s story. It was a slow process, and because I wanted to set their story in the context of world and Canadian history, I still had a lot of research and reading to do. If I procrastinated too long, Mommy would come to me in my dreams, making me jump out of bed to write. Then I ran into the wall.

In 2008, I discovered that, since Daddy had been dead for over twenty years, I could apply to Citizenship and Immigration for my father’s naturalization papers. Receiving the information about the exact dates he travelled between Canada and China, his move to Montreal from British Columbia, the protracted process he had to undergo to become a citizen, and the varied applications he had to make to bring his family to Canada brought about my “aha!” moment. Finally, I could match his dates and activities to world events, to Mommy’s recollections of my father, and to my own list of memories. These were the keys I needed!

I completed the first draft of the manuscript, and at a pitch session at the 2008 Surrey International Writers’ Conference I attracted the interest of an American agent. I was turned down nine months later because the story was “too Canadian.” After pitching to and being rejected by two Canadian agents, I pitched directly to three Canadian publishers, all of whom were interested. Brindle & Glass was the first, but suggested I hire an editor to tighten up the manuscript before they could accept it. It was the best advice; I signed a contract with them in 2010.

Thank you to Tori at Brindle & Glass and to May Q. Wong for sharing more about A Cowherd in Paradise.

See our past Under the Cover blog posts >> 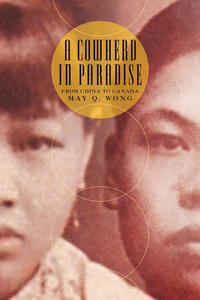 By May Q. Wong