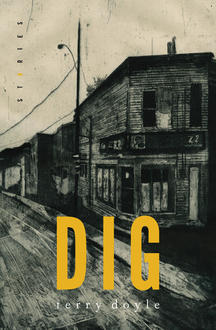 In his collection DIG (Breakwater Books), NLCU Fresh Fish Award-finalist Terry Doyle crafts twelve page-turning short stories about an assortment of characters—from a young social activist whose work is constrained by selling puppies on the internet to a blue-collar worker whose future is tied to a suspicious coworker—over the backdrop of a gritty downtown St. John's. We talk to Terry about the potential of short stories, analog writing, and his writing style.  Scroll down for our interview and an excerpt from DIG.

Sub-economies that emerge when locals scratch at dignity through ingenuity.
Austerity, and Awe.
Working, and not working.
Dogs.

I don’t know, I get really excited about collections in a way I rarely do about novels. They’re sort of like albums, and that’s the first artistic medium that I really fell into. Music. But even a singular short story—they’re so much more digestible. And they’re fun to pour over. You can reread a story multiple times without taking—if you read as slow as I do—weeks to do it.  Also! I can reasonably ask a friend to read an early draft of a story, but asking someone to read your unpublished novel is asking for a lot! That’s a lot of labour: close-reading 80,000 words. Short stories are freer. I think any idea can be made into a story. I love that potential.

TD: I like to write by hand, as fast as I can, until I reach the end of whatever I’m working on. Then go back and reread, typing it up, and I see what I’ve got. But otherwise, no.

TD: I lost someone very close, and that inspired me to give up plumbing and try again to write. So, not wanting to live with regret is probably number one.

There is also an embarrassment of writers in and of St. John’s. The community here is very inspiring.

My mother gave me two books when I was younger and said she worked with relatives of both writers. It seemed achievable after that. Knowable people were writing books. The books were Alligator by Lisa Moore, and The Nine Planets by Ed Riche. But if I were to list writers who’s work currently inspires me it would be: Kevin Barry, Michael Winter, Sara Tilley, Megan Gail Coles, Dermot Healy, Lisa Moore, Amy Hempel, Denis Johnson, George Saunders, Bridget Canning, Raymond Carver, Robert Chafe, Bud Smith, Colin Barrett, Wells Tower.

When Matt arrived downtown to start his first shift, there was nowhere to park his truck. He circled the residential streets until he found a section of King’s Road that didn’t require a permit, and he walked down to the site over the icy hills. He waited outside the run-down building in the cold, holding his lunchbox and his hard hat, unsure if he’d be supplied a new one. The uncertainty provoked an edged agitation—not knowing, unable to prepare properly left him sweaty and anxious. And his old hard hat was expired.

After ten minutes or so a white truck pulled up and wedged itself behind the concrete barricade.

“You Matt?” said the man who stepped from the truck. He was in his forties and wore just a red hoodie and jeans, despite the temperature.

The man walked past Matt and pulled a set of keys from the hoodie’s pouch. There was a heavy metal door held shut by a chain and padlock. The man tried the lock, his reddening hands fumbled with the keys. He waved at Matt. “There’s a maul behind my seat. Grab it, will you?”

Matt found a sledgehammer behind the driver’s seat and carried it to the man. The man took a step back and swung downwards, popping the padlock like it was plastic. He turned to face Matt. “They tell you what you’re doing?”

“Cleaning for now, they said.”

The man shook his head and muttered. He walked to his truck and opened the passenger door. “Here,” he said, handing Matt a used pair of tan and yellow work gloves and a half-dozen black garbage bags. “Bag what you can, pile everything else up near the exit or the stairs. I’ll be back at lunch.”

The man got in the truck and his reverse lights came on. As Matt turned to head inside the building he heard the truck being put back into park.

“Here.” The man extended his arm out the driver-side window, a business card held between his index and middle finger. Matt walked over and took it. “If you need anything or have questions you call me, not the office. Alright?”

“Sure,” Matt said. He looked at the card. The man’s name was Chad.

The building was on Duckworth Street, across from the old CBC. Matt had heard it was being turned into condos, but he didn’t know if that was true. He nudged the door open and hesitated a moment before stepping into the darkness. Inside, the air was thick and stale. He wished he had a flashlight. He used the light on his phone to see into a dark corner, but then switched it off to avoid draining the battery. He cleared a window ledge and put down his lunchbox and hard hat. The window was covered in paint and dirt and who knows. He could barely see through it.

It would be three or four hours until Chad came back, and, Matt figured, probably no one knew how much tidying and cleaning was needed. He laid the garbage bags onto the window ledge next to his hard hat as his eyes adjusted to the dark.

Matt climbed the stairs. Bits of glass and dirt scrunched under his boots. He kept to the middle of the stairs and put the gloves on his hands as he passed the second floor. The third floor held an old desk, chairs, and in one corner there was a pile of lumber—odds and ends of pieces of wood, nothing uniform. It looked collected, not bought. There was a phone book on top of the desk, its pages wavy and swollen. The fourth floor was dark. Most of the windows were covered with plywood. Matt used the flashlight on his phone again to look around, but there was nothing to see. More dirt, trash, bottles, and two office chairs.

On the fifth floor the stairs stopped. A cold breeze came in through a broken window. Matt stepped onto a wooden plank and something moved, lifting off an old display cooler and startling him. It flew out through the hole in the window: a pigeon.

The room was open and empty. The floor strewn with beer boxes, bottles, trash, the display cooler, and someone’s sneaker. Matt stepped to a window that faced east, up Duckworth Street. He looked down to see the slippery sidewalks busy with men and women in expensive black coats—all sliding their way into the surrounding law offices. Further up the street, near the courthouse, an ambulance sat double-parked with its lights pulsing against the snow and ice. The line of delayed traffic went all the way past the building. Down below, someone blew their horn. Matt switched windows to see the street in front of the building, to make sure the horn blower was in traffic and not someone about to come inside. He shuffled along the front wall, looking down at the street, then he tripped in an ankle-high mound of clay or mud. Catching himself on the wall, Matt looked up and saw an exposed beam streaked with white. He looked at the toe of his boot. It was covered in pigeon shit.

Scraping his boot along the bottom edge of the display cooler, he heard something roll down below, like a bottle being knocked over and travelling across an uneven floor. The sound echoed in the cavernous building. But which floor? Maybe it was more pigeons. Or rats. But then there were footsteps. Urgent footsteps, and they were descending, or receding. Matt stood absolutely still, to listen, until he heard a door open and then close. The building was silent again. Still, he waited and listened another moment, his breath puffing quickly—the broken window, the cold. He headed down the stairs and saw nothing on the fourth, nothing still on the third.

But on the second floor, right in the middle of the room: a blackened pile where someone had lit a fire. Matt nudged the ash with his shit-stained boot and an ember glowed. An overturned milk crate sat next to the ashes. On the western wall, near the stairs, there was an office. The door was missing—probably burned.

When he crossed the threshold into the office he caught a faint smell of piss. On the floor there was a tangle of dirty blankets and, laid on the window ledge, two pairs of socks. 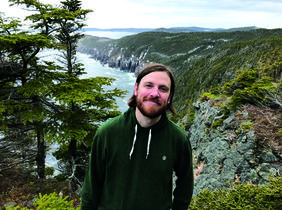 Terry Doyle is a writer from the Goulds, Newfoundland. Winner of the 2017 Percy Janes First Novel Award, and finalist for the 2017 NLCU Fresh Fish Award, his work has appeared in Riddle Fence, Papermill Press, and the Newfoundland Quarterly.

Thanks to Terry for answering our questions, and to Samantha Fitzpatrick at Breakwater Books for making the connection and providing a teaser from DIG for us to read. Stay tuned every Thursday in May for more short stories and interviews. DIG is available now on All Lit Up. 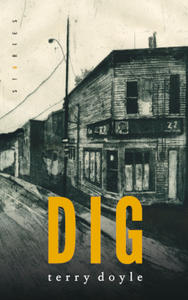 May 17, 2022
Accessibility, Inclusion & the Theatre: An Interview with Paul David Power