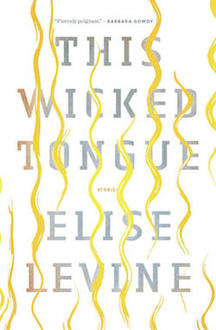 Short Story Month concludes with Elise Levine's This Wicked Tongue (Biblioasis), a collection that takes an honest and wry look at our inner psyche's and explores our ability to transform ourselves. Below, Elise shares more about the beauty of brevity and shares a story from the collection titled 'The Association.'

Elise Levine: The stories in This Wicked Tongue examine the urge to break faith with expectations and rewrite the scripts of the past. The characters are driven by circumstances and their own inner compasses toward exile and self-exile. Transgressing, charming, abandoning places and shedding versions of themselves, they wonder who they might become.

EL: I love how brevity can heighten poignancy by creating a sense of torque, of something sheared off. It creates an inherent dynamic, a sense of momentum set against the implications of what’s left out or unvoiced — which helps mark such eliding experiences as erasure, denial, fear, loss. Emotional courage, too, the hopefulness of taking leaps into the unknown. Ultimately, short stories suggest the inevitable brokenness of life, given our mortality.

EL: I read first, books of fiction or poetry by others, to get the words going. I look over my notes. And then, even if I’m working on the later sections of something, I’ll start by going back to the beginning, or earlier sequences, and read over and revise.

Excerpt from "The Association" in This Wicked Tongue (Biblioasis)

Where are you? Martin’s mother says when he calls. She sounds groggy, not her usual self.

Martin is in Virginia Beach with his dad. Or not quite with his dad, who is here to check out—Martin’s  dad ’s words—a  certain bass player at one of the bars near the boardwalk, while Martin keeps his own counsel in the motel room.  His own counsel is a new phrase of Martin’s, gleaned from one of his TV shows. Martin is eleven. His dad is in a band. After a thirteen-hour drive, he and his dad arrived straight from Chicago around dinner time and now it is well past. Martin is supposed to be in Rehoboth with his dad. His dad is supposed to take him for crab cakes and fries and hot pie with caramel sauce. He is supposed to buy Martin a boogie-board though it ’s June and the water will be cold. In the morning his dad is supposed to take him the short drive from Rehoboth to Gran’s in Perth Amboy.

In the weeks before his dad picked him up at five a.m. this morning, Martin and his mother agreed he would only call in case of emergency. He peers at the low stuccoed ceil- ing of the motel room and swipes the sweaty hair from his eyes. He crinkles the plastic bag lying next to him on the mattress cover. The laboring air conditioner barely flutters the closed curtain. The window looks out, Martin knows, onto the parking lot. The motel is near the highway and not within walking distance of the beach. None of this, Martin knows, is an emergency.

Put your father on, Martin’s  mother says when he doesn’t respond. She sounds more alert now. Martin pops a hard candy in his mouth. Sour cherry. He clicks his teeth against it. Next he will try the banana taffy his dad bought at the last service plaza at which they stopped.

Where is your father? Martin’s mother says. Martin? I have to go the bathroom, he tells her.

Don’t hang up, she says, enunciating with the cool precision she might use with one of her patients. Put your phone down on the desk, she says. I’ll be waiting for you.

All right, she says evenly. On the nightstand. Is there a nightstand?

Martin, she says in her clear, unflappable voice when he returns and picks up again.

I’m here, she says after a few seconds.

Here, he thinks, and pictures the old apartment before remembering they’ve moved. He brings the taffy close to his phone, scrunching it between his ear and shoulder, and unwraps the candy so she can hear him do it. He chews loudly.

Why don’t you describe the room for me, Martin? she says cheerily.

Not much to describe, he thinks. But he will leave it to her to decide what is important and what is not. There ’s two beds, he mumbles.

Good, she says. Thank you. Any sounds?

Martin pulls his ear away from the phone. The mini- fridge buzzes. A few sad clanks for attention from the AC unit. Surf, he tells his mother, struggling to get his tongue around the sugary plug in his mouth. Big-ass waves, he lies.

Martin, his mother says, then coughs to cover her stern- ness at his language. See? she says, in reset mode. Pretty neat, huh? Tell me, what color are the walls?

He has no idea—the  walls are walls. He wrinkles his nose and swallows. The room smells bad, flobby, a made-up word he’ll tell her if she asks. He fixes on an unevenly painted square above the TV, which is not working. There are uneven squares everywhere, he realizes, spying another above the closet, others in spots near the ceiling. Drab, he thinks, the walls are drab, though he knows that is not a color.

He considers that yellow might please her. He recalls the Post-its tabbed on the doorframes and banisters of the new townhouse he and his mother relocated to on the South Side this past winter, the neighborhood occasioning sneers from his aunt and uncle—his mother’s older sister and younger broth- er, North Siders. His mother’s flags bear handwritten instructions—NO NOT HERE! and FIX THIS CROOKED!—for the workmen who still arrive every week to finish what the builder should have completed before Martin and his mother took possession, as his mother refers to it. Martin thinks the townhouse will never be fixed. He mostly ignores his moth- er’s written directives, which are not addressed to him and which, in his view, serve as poor replacements for the framed prints and family photographs that once hung in the sprawling, floor-crooked Rogers Park one-bedroom he and his mother shared with Martin’s dad—mementos now stored in the town- house garage. As such, Martin thinks—liking  the sound of the phrase, sometimes used by an evil lawyer type on Martin’s favorite rerun series—as such the notes are also like the mutter- ings of the adult world, like the continuing arguments between his divorced parents that do not concern Martin. Over his head, out of sight. Nothing he can or needs to do about them. His mother will deal. As such, the notes make him feel safe.

He picks a jawbreaker from the bag and contemplates it. Yellow, he tells her.

She gasps happily. Yellow, she says. That’s exactly what I was thinking.

He wakes cold out of the covers. There is a kerfuffle—his mother’s word, he realizes despite his haziness—outside the motel-room door. He hears a woman’s voice. A man’s. Martin’s dad, Martin realizes after a moment. The woman squeaks a few words Martin can’t make out. Bullshit, his dad says, laughing. Martin drags his heavy legs under the covers and snuggles down. Bullshit. As such, the rest is blank.

Martin is the boy who eats all the candy and he knows it. He is a Lab Rat. This means he is smart, very. He can do what he wants, to a degree.

Finish the story! Download a full PDF of The Association >> 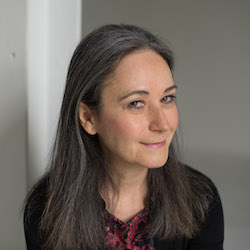 Elise Levine is the author of the novels Blue Field and Request and Dedications, and the story collections Driving Men Mad and the forthcoming This Wicked Tongue. Her work has also appeared in Ploughshares, The Gettysburg Review, The Collagist, Blackbird, Best Canadian Stories, and The Journey Prize Anthology, among other publications, and has been named a finalist for Best Small Fictions 2018. She is the recipient of a Canadian National Magazine Award for fiction; awards from the Canada Council for the Arts, the Ontario Arts Council, and the Toronto Arts Council; and residency fellowships from Yaddo, the MacDowell Colony, and the Ucross Foundation, among others. She lives in Baltimore, MD.