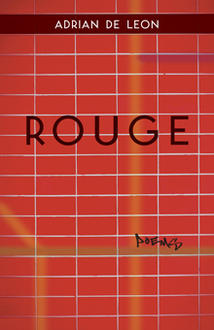 Adrian De Leon's Rouge (Mawenzi House) sees city as poem in this collection inspired by the Toronto's subway system. Mimicking the system in both form and structure, the poems in Rouge reveal Toronto through a diverse lens full of humour, and memories – both fond and heavy – as they recall Toronto's deadly mass shooting that took place in 2014 on Danzig Street.

From 2013 to 2014, in response to a deadly mass shooting at a block party on Danzig Street, Scarborough, poet Adrian De Leon travelled across the subway lines to every station on the Toronto subway map and wrote a “poetic moment” inspired by each station. These moments, collected in De Leon’s debut poetry collection, Rouge, range in tone, voice, and content; the poems offer a distinct sketch of Toronto and its neighbourhoods, filtered through the lens of an area of the city often maligned and misunderstood.

The poems in Rouge are organized along the subway lines, moving from north to south, west to east, and culminating in Scarborough. De Leon has described this as “infrastructure as genre.” The city is the poem, with Toronto itself reflected through the very form and structure of the poetry.

While many poems are contemporary verse, De Leon uses a variety of styles in the collection. At “Dundas West”, he offers haiku instructing the reader on how to make an enemy of the TTC operator (“Give right of way to / others when you exit train. / Revoke suddenly”). Other poems are more abstract and visual, using typography to create the poetic moment. “Castle Frank” and “Broadview,” are to be read together, preferably, De Leon says, as a performance with 4 friends.

There’s a wry humour to the collection, poking gentle (and sometimes not so gentle) fun at Toronto’s denizens and the TTC itself, exposing the city for its quirks and foibles. But there are also more earnest reflections: a look back at childhood trips to the Ikea at Leslie, a tribute to the beef patties at Warden, a memory of watching trains on an overpass at Lawrence East.

The collection ends with two powerful takes on the Danzig shooting, both titled “Rouge.” These poems are the only ones in the collection not named for a TTC station, but instead evoke the Scarborough neighbourhood Rouge Valley, which is inaccessible via the subway system. The first is made up of fragments from tweets, song lyrics, text messages, and news articles about the Danzig shooting, deconstructed into a poem. The second is a lyrical response to the event.

Special thanks to Sabrina at Mawenzi House and Adrian for sharing this diverse collection. For more poetry videos and excerpts, click  here.