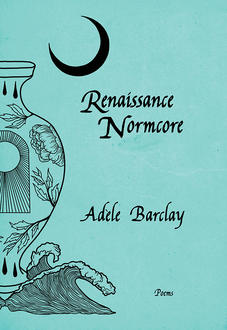 "Would you rather be the sun or the moon?/Would you rather sing like Jenny Lewis/or Fiona Apple?" begins Adéle Barclay's reading of "You Don't Have To Choose But You Do," a poem from her latest collection Renaissance Normcore (Nightwood Editions). Read on for two poems from the collection, performed by the poet herself.

“Physical & cerebral,  sexual & independent, witty & vulnerable—in Adèle Barclay’s poems these pairs are paramours, not paradox. This work is unafraid to adore, to pour honey all over the world or a lover—not afraid to criticize either. I love Barclay’s wildness that tames her reader—I love her direct flirtation and unflinching analysis. Her shade, her care, her longing. Nobody else has this precise combination of revelry, wish, and command. I think Adèle Barclay should become very famous for her poetry—she’s so real and so true to her words that fame itself wouldn’t dare torque or twist anything without this poet’s permission.” – Brenda Shaughnessy, author of The Octopus Museum

Renaissance Normcore belts like a classically-trained Riot Grrrl, composing catchy tunes in the key of fear and desire. Building on the dreamy emotional landscapes she plumbed in the award-winning If I Were in a Cage I’d Reach Out for You, Barclay navigates even sharper peaks and valleys in her second collection to examine the links between intimacy and power. Tracking the paradoxical impulses of anguish and joy that underpin daily life in our hostile neoliberal climate, these poems are both abject and sweet as they repurpose loss into life and test the bounds of how much a poem can hold. Renaissance Normcore is a tender, fierce collection about how queer resilience dwells in the everyday.

YOU DON’T HAVE TO CHOOSE BUT YOU DO

Would you rather be the sun or the moon?
Would you rather sing like Jenny Lewis
or Fiona Apple? I gave you a box from Lithuania
and inside it wind and rain. And beside it
space for another box. This isn’t a nest
but a to-do list I vaguely mention
as if I know what I’m doing tomorrow.
The alarm will go off and I’ll sink
into resignation that light isn’t the ocean
but it almost is. I’ve replaced living
with swimming and reading Anaïs Nin.
I like when she shuts down Henry Miller
for correcting her English, trying to ply her
away from her diary. I read their letters
and imagine them both on Facebook Messenger—
all the dick pics he’d send; her, chatting up
several men at once and never recycling material.
Would you rather be blood or stone?
Would you rather receive or give a dick pic?
Be moved or be the one doing the moving?

Between us a storm
and two completely different skies.

Adéle reads "burn it all down with water" from Renaissance Normcore

BURN IT ALL DOWN WITH WATER

love sometimes dwells
with violence, even though
that isn’t really love
which is what Irene told me
when I was twenty-six

a revelation I haven’t
fully internalized but live with,
a cell with a semi-permeable
membrane inside an organism
inside an ecosystem

I used to study biology
because my father
forbade me from pursuing
literature, moving to Montreal,
being gay, eventually

I accomplished all three
it’s okay now
a lot of my poems
refer to salt, the only residue 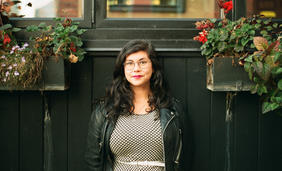 Adèle Barclay is a writer, critic, editor and the author of If I Were in a Cage I’d Reach Out for You, which won the 2017 Dorothy Livesay Poetry Prize. She is the recipient of the 2016 Lit POP Award for Poetry and The Walrus’ 2016 Readers’ Choice Award for Poetry and has been nominated for a Pushcart Prize. Her poems have appeared in Vallum, Cosmonauts Avenue, Room Magazine, The Puritan, Heavy Feather Review, glitterMOB, The Fiddlehead and elsewhere. She is Arc Magazine’s 2018-19 Poet in Residence and an editor at Rahila’s Ghost Press. Her second collection, Renaissance Normcore, is out from Nightwood Editions.

Thanks to Adéle for sharing her poetry with us! You can read more of Adéle's poems in Renaissance Normcore, available October 7th on All Lit Up. For more Poetry in Motion,  click here.