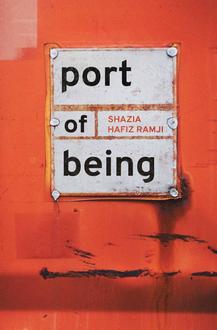 Poetry Grrrowl begins with debut poet Shazia Hafiz Ramji whose already garnered a lot of attention with her book  Port of Being (Invisible Publishing), a collection that mines speech from the city streets and the internet to explore the intersection between the personal and the public, the surveiller and the surveilled. Below Shazia chats with us about the impetus behind her book, who some of her fave women of poetry are, her would-be superpower, and more. Read on for the interview and the poem "B-Line Espial" from her collection.

Shazia Hafiz Ramji: Port of Being grew through a slow process of city walking, obsession, and working through trauma. The larger themes of surveillance, shipping, and social media are rooted in two lived experiences that are the inciting events for the book. The first one is the experience of being stalked by a thief and the second one is the subsequent experience of carrying out my own surveillance along the waterfront by means of listening and noting bits of overheard conversations.

SHR: I used to write when I felt like it. When I felt like it, I would often feel a tightness in my throat, similar to the urge to sing, or to scream. That’s changed since I began. Sometimes I still write when that feeling arises, but more often, I play William Basinski on loop, light some palo santo, freewrite for at least fifteen minutes, then tease out lines and build the poem based on the freewrite. I still feel that feeling when freewriting and it’s relieving to know that it’s possible even through discipline and routine.

SHR: I don’t think I know, to be honest. I remember writing between sets of Apogee racing games when I was a kid. I remember writing in front of the TV, especially after watching Nat Geo (I still write after watching Blue Planet or Planet Earth). I remember noting descriptions, images, names of things, and random words, regardless of what I was doing. I also used to walk around carrying a small tape recorder and record my family speaking, then I would listen to it and play it at random moments to irritate them and to make them laugh. Listening is very close to poetry for me. And wonder. And awe.

ALU: Who are some of your fave women poets?

ALU: If you had one superpower, what would it be?

SHR: If I had a superpower, it would be to transform myself into a hacker, so that I could delete the entries holding my student loan debt as well as my library fines, as well as the debts and loans of every writer in this world.

A poem from Port of Being

A silver flake from the surveillance cam above me
fell into my lap on the bus.

It was not made of light, but I don’t know
where it disappeared. In my glimpse

of espial, I saw the necessity of doubling,
so I waited to see myself in all the people

who departed. But they stepped off too fast,
or I was just tired. Wet lights on the window

slunk into each other, like a taboo on fingers
stringing a rosary. The guy next to me was editing a photo

of his girlfriend. It was backlit and we could see
the sleep in her hair. He saw me looking and smiled.

I was banking on memories of love to respond,
but I was a body with insides

of red ginger, stuck on the bus with a stranger who had
seen someone—I mean, really seen her. I began to look
at those who were arriving. I smiled at a few.

One of them sat down, expectant, like a statue in the rain.
On Broadway, I saw others looking at a drone overhead. 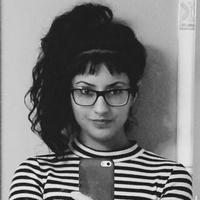 Shazia Hafiz Ramji was a finalist for the 2018 Alberta Magazine Awards, received the 2017 Robert Kroetsch Award for Innovative Poetry, and was a finalist for the 2016 National Magazine Awards. Her writing has appeared in Quill & Quire, Canadian Literature, the Puritan, and Metatron's ALPHA and OMEGA. She lives in Vancouver where she works as an editor and teaches creative writing. She is at work on a book of stories and a second book of poems.

During the month of April, you can buy  Port of Being as well as any of our featured Poetry Grrrowl books for 15% off (+ we'll send you a stack of our exclusive temporary tattoos and stickers to show off your woman pride!)

BONUS: Test your knowledge of all the rad women of poetry with our Poetry Grrrowl quiz!

In Review: The Week of April 1st

April 1, 2019
Women Write the Blues: A Spotlight on Dark Reads