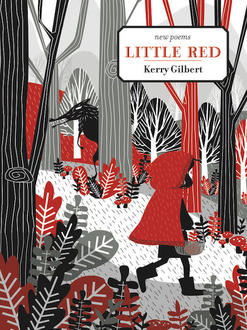 In her latest Little Red (Mother Tongue Publishing), BC poet Kerry Gilbert examines the Big Bad Wolves of society with a contemporary verse tale of Little Red Riding Hood, one of the most well-read stories of missing and murdered girls and, more broadly, violence against women. We chat with Kerry about how Little Red began and how anecdotes inform her writing, and read "this is what Scarlet would look like now" from her collection.

Kerry Gilbert: Little Red was an unexpected surprise for me—I didn’t intend an entire collection with this theme, but the collection obviously intended me. It started with a headline that I read: about a three-year-old girl abducted from her home in the middle of the night and days later found dead in a field. Stories like this evoke so much fear, especially as a parent. It started me on this trajectory about fear and parenting and the stories we tell about both—about what we tell our children and ourselves when bad things happen. I thought a lot about lost children. I thought a lot about the archetypes of Little Red Riding Hood—the ones present and the ones missing from the story. I was wondering where the parents were and what happens when parents are absent—literally and figuratively. It turns out I had a lot to say about these things. It turns out that Little Red is still relevant.

KG: Sometimes I begin a poem and sometimes a poem begins me.

KG: That’s hard to say, because I can’t think of a time without poetry. I’m sure I was drawn to the sounds of early rhymes and songs of childhood—maybe the beautiful sound of a skipping rope sweeping the tops of grass while we chanted rhymes about boys and jumped into the arc when it was our turn—but I think my real interest/excitement in poetry came with the realization that I could tell story through poems. The real “aha” moment came to me after I had already started experimenting with poetry but didn’t have a lot of context to what I was doing. I took a class that studied Michael Ondaatje’s The Collected Works of Billy the Kid. That same year, the school presented the verse novel as theatre in the round. It changed everything I ever thought I knew about poetry and was the real spark for me in terms of style and possibilities.

ALU: Who are some of your fave women poets?

KG: Three phenomenal women poets that have taught me the most about poetry are Sharon Thesen, Mona Fertig and Lorna Crozier (an ode to writers from the West). There are many, many more to name, but as soon as I think of one, it prompts another and another and another. I could start a lifelong list project to answer this question.

KG: Anecdotes. I am really drawn to stories—memory ones, invented ones, ones that I read at the checkout stand, in the news, hear by the water cooler, whispered between friends, in movie theatres, in novels, in other poems. Most of all, I am curious about humans and what motivates behaviour. Stories turn into poems, for me, as a way to unpack/filter them and attempt to figure out the human condition.

sound. to be able to write

this poem without noise

A poem from Little Red

are now sunk deep. how her mouth has curled
slightly in on itself. she’s lost baby fat which crisps

cheekbones. but her eyes. her eyes are the same
curious, independent of this whole aging process 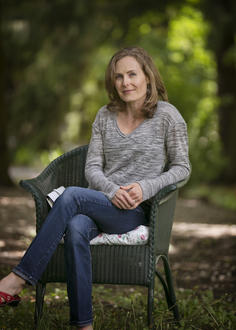 Kerry Gilbert grew up in the Okanagan. She has lived on Vancouver Island, in South Korea, and in Australia. She now lives back in the valley, where she teaches Creative Writing at Okanagan College and raises her three children. Her first book of poetry, (kerplnk): a verse novel of development, was published in 2005 with Kalamalka Press. Her second book of poetry, Tight Wire, was published in 2016 with Mother Tongue Publishing. Tight Wire was shortlisted for the ReLit Prize in 2017.

Most recently she won the Gwendolyn MacEwen Poetry Award for Best Suite by an Emerging Writer 2016/2017. The suite is the core of a new verse manuscript called Little Red, which has just been released by Mother Tongue Publishing March 2019. Also, three of Kerry’s poems made the long list for the 2017-2018 Ralph Gustafson Prize for the Best Poem (The Fiddlehead’s 27th annual contest).

Kerry is co-founder of Spoke Literary Festival, a celebration of writers in and around the Okanagan. She also runs writing workshops for teens, called Story Makers, a mentorship program that helps young writers find their voice and confidence.

During the month of April, you can buy Little Red as well as any of our featured Poetry Grrrowl books for 15% off (+ we'll send you a stack of our exclusive temporary tattoos and stickers to show off your woman pride!)

BONUS: Test your knowledge of all the rad women of poetry with our Poetry Grrrowl quiz!