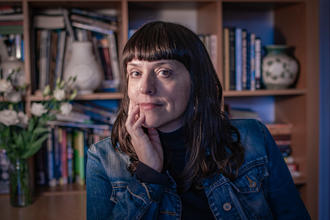 Writer and activist carla bergman who co-directs the women-run speakers' series EMMA Talks chats with us about standout moments from her work on Radiant Voices: 21 Feminist Essays for Rising Up Inspired by EMMA Talks (Brindle & Glass Publishing), how activism was one of her earliest memories, and what books she's reading now.

All Lit Up: In addition to being an editor, you're also an activist and the co-director of the women-run speakers' series EMMA Talks. For All Lit Up readers who aren’t familiar, can you tell us a bit about EMMA Talks and how the series helps to amplify the voices of women and gender-nonconforming people?

carla bergman: EMMA Talks is a mini–art festival and speakers’ series in Vancouver, BC. EMMA means: engaging monologues, mutual aid. The core purpose of EMMA talks is to bring important stories by women, two-spirited, and gender-non-conforming folks who are writers, activists, thinkers, storytellers, makers, and doers, from the periphery to the public. Their stories celebrate and build on the conversations, imaginings, and hard work of communities and movements. EMMA Talks has produced ten events, with an archive of seventeen talks viewed daily around the world!

EMMA Talks had its genesis in 2011 as I was preparing materials for my seminar during an alternative to university I co-organized in Vancouver, BC. I wanted to include videos of talks alongside written material and was struck by the scarcity of high-quality videos of women and gender-nonconforming folks talking about theory and organizing. I was also disappointed to find an overwhelming number of online talks by white cis men. Institute faculty member Astra Taylor and I, speaking one day, thought it would be amazing to create a version of TED Talks that was more rigorous, fluid, and feminist. The EMMA talks co-director, Corin Browne and I felt that it was essential to carve out a space where folks could listen to monologues by diverse and powerful storytellers and thinkers. This could happen either at the events themselves, or on our website—we create professionally produced and accessible videos of the talks (emmatalks.org).

We strive to have a feminists ethics of care and mutual aid for the entire project. For instance, we do not tell folks what to talk about, or how long the talks should be, and trusted them to make those decisions because they know what they want to talk about much better than us. Each EMMA Talk begins and ends with a short social gathering and art engagement as a way to invite the audience in to be part of the conversation. This also replaces dreadful QA’s (because whoever is sharing their story deserves to have the last word!). Half the donations collected through EMMA Talks went to the speaker’s cause or project of choice, while the other half paid tech and support staff (all emerging young women in tech). All but one of the events were all free, and no one was turned away for lack of funds. We also curated the talks to connect well-seasoned folks with emerging and new folks.

I think women’s reticence to speak publicly is connected to the patriarchal carelessness of so many public events. I found that when I asked organizer of many of events why they didn’t invite more women/non cis-men, they often said that they tried but women say no. This is all part of the culture of silencing women, or as Arundhati Roy says so beautifully: "There's really no such thing as the "voiceless." There are only the deliberately silenced, or the preferably unheard." Supporting the voices of women and gender non-conforming folks meant transforming the culture and context of public speaking. By the third year of organizing EMMA, I noticed that women were quicker to say YES to invitations to speak, and I think that’s because they saw that we were doing something different. We are also living in a time where there is an eruption of more writings and books from women and non-cis-men like never before, and EMMA Talks is just part of that trend and celebration. And this all sits on the shoulders of decades of feminist and LGBTQ+  activism. 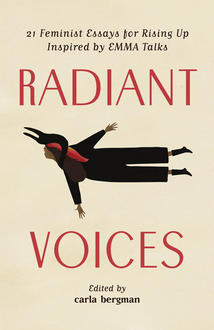 ALU: How did you end up choosing the essays that form Radiant Voices? What was a standout moment from the publishing process?

cb: I chose eight of the EMMA Talks to help guide the overall curation, selecting talks that would be adaptable to print. Then I began thinking about themes to inform the curation, some of which were from the EMMA Talks, some connected to my work over the years, and some new. They were: Connecting, Rediscovery, Creating, Social Justice, Celebration and Matriarchy. I was aiming for a diversity of writing styles and voices, from personal narratives, to poetry, to academic, and so on. Of course, as time went on, more themes emerged as I invited other writers to contribute.

I want to also give a big shout out to Emma Goldman (and her work) because she connects to both projects (Yes, EMMA is named after her). She said “I want freedom, the right to self-expression, everybody's right to beautiful, radiant things,” and this helped inspire the name for the book.

I truly believe that alongside the activist voices of rage, resilience, and anger are the joyful and celebratory voices and stories that we so desperately need to hear more of.

There were many standout moments! As with all creations, and especially anthologies, it requires a commitment to care for each other, and to embrace trust and patience—because we are working with a lot of folks who require different timelines, support, and life gets hectic, things happen, and so on. During the creation of the book, as things came up, I was constantly amazed by the trust and care I received from the entire team at TouchWood Editions/Brindle & Glass Publishing, but in particular Taryn Boyd and Renée Layberry, whose feminist ethics of trust and listening in my emergent curation style were exemplary. For instance, near the end of the creation of the book I felt like there was one piece missing. I always want to include and amplify the stories that show the roots of how oppression (or liberation) happened. In this case, I wanted more said about where the patriarchal silencing of women began, and how this was part of a violent counter-revolution against liberatory possibilities. I was reading Silvia Federici’s new book, Witches, Witch-Hunting, and Women and there was a chapter about the meaning and the historical roots of the word Gossip. And there it was, the missing link that brilliantly tells a bit of the story. So, I immediately sent an email to Silvia and asked if we could publish it in Radiant Voices, and she graciously agreed.

ALU: How does your activism inform your writing?

cb: They are one and the same. When I think back to when activism began for me it’s actually one of my earliest memories. If at the core of being an activist is to stop or prevent an injustice, then I did that all the time—as most kids do. It can be subtle, you know, but often adults don’t tune into it (it’s often seen as disrespectful behaviour, etc). And, I also think storytelling and creating stories (fiction or otherwise) also stretches back to those early days for me.

Deeds, the actions we take, are most important to me, but sometimes we need to hear about them to feel inspired, and to truly feel hopeful. That’s where writing (and amplifying others) comes in for me. When we share our stories we move people. We connect to one another. We feel less alone. It’s extremely crucial. Because when we feel connected and part of something, we feel more powerful. Possibilities grow, change happens.

ALU: What are you currently reading, or have read recently that you enjoyed?

cb: I just finished The Broken Earth Trilogy: The Fifth Season, The Obelisk Gate, The Stone Sky by N. K. Jemisin, and cannot recommend it enough. And, I am currently reading: Braiding Sweetgrass: Indigenous Wisdom, Scientific Knowledge, and the Teachings of Plants by Robin Wall Kimmerer, a fantastic book that everyone ought to read. And, finally, I was just gifted Rebecca Solnit’s new book, Whose Story Is This, and am excited to dive in!

carla bergman is an independent scholar, filmmaker, and producer. She is the co-director of EMMA Talks, a mini-art festival and speaker’s series by women, co-editor of Stay Solid: A Radical Handbook for Youth, and co-author of Joyful Militancy: Building Thriving Resistance in Toxic Times. carla lives in Vancouver, BC on Squamish, Musqueam, and Tsleil-Waututh lands.