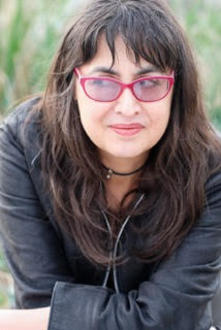 In the summer of 1974 I took the #18 Corydon to the movie theatre. I could’ve taken the #66 Grant, but on Corydon the buildings were red brick, crumpled and deteriorated. People drank gin from chipped mugs while they washed their too-tight clothes. The laundromats were tuned to radio stations, playing "Black Dog" and "Crimson and Clover." Susan or Jackie or some other girl didn’t make it to The Sting that day, leaving me to walk across the short, rickety bridge between adolescence and adulthood. Elbows and knees pointed out of my T-shirt and jeans, and my messy black hair and spindly legs had just exited the North Star or the Hyland or the Garrick. I was twelve and had made the foray to my first solo movie.

I’m going to get those guys. Step out of my way, sir, I said to the garbage cans, or I will be forced to fuck you up. The dust vortexed, and my eyes winced. Then a car honked. A grown man cranked open his window and whistled, then stuck his tongue between his fingers in a way I’d never seen before. It made me feel ashamed and made my eyes water, so the car and the man became hazy, and had made the air ribbon and vibrate. Fuck you, I yelled and ran around a corner, peering back to make sure the man was gone. I’d become the loathsome other who does nothing but heave her creamy breasts and get grabbed. Until then, I’d viewed myself as the hero. Now the whistle had ruined everything, and my mind fixed on this problem all the way home.

The table was an Arborite circle that seated six and was covered by a yellow plastic cloth. The hem dangled with long, tight braids that shivered when you touched them and made the table look like the sun. My mother usually stood with her arms crossed, drinking Nescafé or pulling trays out of the oven while the rest of us ate. During dinner a restless anger picked at me. I finally announced: There are no movies with strong women characters. After a long silence, my father’s lip curled and he grumbled, You don’t know what you’re talking about.

"But that night I wouldn’t eat cake, and vowed to be a feminist, whatever that entailed."

I do, I said. My brothers and my grandmother groaned and buckled against the table. Why don’t we talk about hockey, my mother said. Name one, I said. Katherine Hepburn, he said. Then I said, She’s just a makeup-wearer. My mother said, Where did you hear that? My father said, Settle down. Then my mother said, You’re going to give your father a heart attack. My father said, Maybe Crawford or Davis. Throughout, my brothers stared down at their plates, shading their eyes and shovelling the food into their mouths as fast as possible. My grandmother gleamed like she was trying to smile, but her jaw became rigid and almost cracked. I told my father I would now become a feminist. I’d heard the term in Time magazine. We had a subscription. You won’t be a feminist, my father yelled. It’s too late, I shouted. I’m one already, I said. Keep it down, my mother said. I’m leaving, I said. Good, go, my father said. I leaped up. Excellent, I said. Everyone else went silent. My mother and my brothers. My grandmother told my mother to bring out some cake. But that night I wouldn’t eat cake, and vowed to be a feminist, whatever that entailed.

I sat in my room, listening to records on a blue plastic turntable that was essentially a toy with the one little shitty speaker. I pulled a cigarette out of the package of Du Mauriers and blew the smoke through the tiny holes in the screen of my window. I smell smoke, my father yelled from the kitchen. Then he yelled, Goddamn it, where are my keys! As a reprieve from this horror, my life forced me to make up little stories, but they all lived in my mind. I didn’t know how I’d last until I turned eighteen and could finally run away. My family seemed like people on the Titanic, sinking far in the distance and there was nothing I could do to save them.

The train would pass behind our house at least once a day. When it would finally arrive at Grand Central I’d go to Greenwich Village. There I would find a coffee house. In the coffee house I’d ask the first person who seemed remotely on the ball where Dylan hung out. It would be dark. Dylan would slouch against a wall dangling a cigarette between two fingers. He’d pitch the cigarette across the room, and it would spark like the firecrackers the boys threw at our feet to make us scream. I wouldn't be able to look at Dylan without staring at his mouth or his eyes. Look, I’d tell him. I have officially memorized all the lyrics to Like a Rolling Stone. I know you’re with Suze from the cover of Highway 61. I took a train here just like you took one to see Woody Guthrie—(I’d read it in a book, or maybe in a magazine, which was the only way I could get official information)—so please don’t turn it into anything because I couldn’t handle the awkward complexity of that. People would be staring. Don’t worry about them, Dylan would say. He’d move closer and whisper something in my ear that sounded like ham. I would feel hot and the floor would open up. Look, yes, I do find you attractive, I’d say, but I absolutely couldn’t tolerate it if everything ends up in that one kiss that would last longer than the commercials between the TV shows. I eschew all that. He’d look serious. I understand, he’d say. Then he’d put his arm around me, smelling dark and sweet like the boys who sauntered past me in the halls at school. Then he’d say, If you want you can be my little sister, and I’d say okay and then Dylan and I would run away.

As I hovered at my bedroom door, I’d already slung the guitar at my back. Don’t clank. Don’t you dare clank, I told the change in my pocket. I could hear my family talking softly in the kitchen. My father had his keys. My grandmother gathered up her one hundred shopping bags. My grandmother said, I can take the bus. My father told her, Nobody’s taking the bus. My grandmother said, Just let me take the bus, goddamn it, enunciating the n in damn so it sounded like dam-en. My mother shuffled and cleaned and ran the water. Once the dishwasher started, it was over. That low moan and the light like the one bleating on a dying ship somewhere in the distant expanse of an ocean. I could see the window lights in all the neighbours’s houses bump up against ours, the mothers who just hung around the house taking Valium and the fathers in the Cadillacs who wore the hats with the little red feather at the side. I’d never seen a bird with a feather like that except in the encyclopedia and I didn’t have the time for that now. Outside, the crows screamed as the sun fell and burned down the celluloid edges. Tomorrow I’d buy a pair of Wrangler cords, in goldenrod, and maybe some Adidas and an old black leather jacket at the Salvation Army with the $50.00 that I’d indexed for that purpose. But my jeans weren’t ever Wranglers. They smelled like cheap plastic, and my Adidas weren’t real either. As the dishwasher sounded its low throbs, I wondered if I’d ever really write my stories. Maybe they’d be as unreal as my jeans. Fifty years from now, maybe it wouldn’t matter. No, indeed, sir, it would not. Standing at the door of my bedroom, I didn’t know if anyone would even notice.

Maureen Medved is a novelist, screenwriter, playwright and Associate Professor in the Creative Writing Program at the University of British Columbia. Medved’s screen adaptation of her novel The Tracey Fragments starred Ellen Page and was directed by Bruce McDonald. The Tracey Fragments opened the Panorama program of the 57th annual Berlin International Film Festival and won the Manfred Salzgeber Prize. The film has gone on to feature at a number of international film festivals, screened at MOMA and has also garnered other nominations and awards, including a Genie Award nomination for Adapted Screenplay. Medved has written about television and film. Her novel  Black Star (Anvil Press) was published in 2018. A book of non-fiction is forthcoming in 2020.