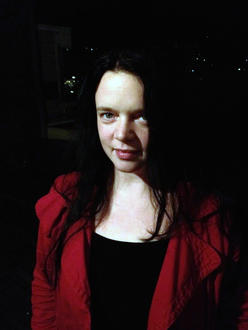 Guest DJing this edition of Liner Notes is author Tracey Waddleton who made us the perfect playlist to pair with her debut short story collection Send More Tourists...the Last Ones Were Delicious (Breakwater Books), a surrealist road trip about human nature that'll keep your foot on the pedal to the last page. Scroll on for Tracey's song choices for each of the stories in her collection.

I’ve been taking one of these online Masterclass courses with Neil Gaiman. In one video he talks about how writers tend to list fellow writers as their influences while leaving out other types of artists. Truth be told, my main informants on how to write weren’t authors of books but writers of songs.

I was five when I got my first album (read: cassette tape). I started stealing sheets from my mother’s letter-writing notepad so I could copy down lyrics. I printed each song out in pencil, then folded the paper and slipped it into a plastic freezer baggie that I kept hidden in the upper corner of my closet.

Sure, it was kind of weird. I had been accused of “wasting paper,” whatever that meant, so I needed to be stealthy. But it was also like those exercises they give you in writing class where you copy out a paragraph of some favourite book so you can feel how the author did it. I was learning a process. Even if I didn’t know it at the time.

Since then, I’ve spent far more time in the company of music than books. I’ve worshipped at the feet of Leonard Cohen, Nick Cave, PJ Harvey, Tom Waits and a thousand other poets of song. Ron & Connie Hynes are almost solely to thank for my lessons in small-town Newfoundland writing. Everyone from Johnny Cash to Kurt Cobain to Kendrick Lamar has taught me something—and new musicians are popping up every day to catch the new moods. If there is an app for everything, there’s a song for everything, too.

Send More Tourists…the Last Ones Were Delicious didn’t have a soundtrack, so in honour of my most influential medium, I threw one together.

Of course, if you’re bored already, you can always head over to Spotify or YouTube and simply listen.

“Bad Guy” by Billie Eilish. For reasons that will become apparent.

I hope these things don’t happen anymore, but of course they do. Songs like Stella Donnelly’s “Old Man” give me hope the tide might turn.

A love story. A murder. The opening images of this story are inspired by Springsteen’s “Thunder Road.” Like a vision she dances across the porch as the radio plays.

“Martha Rides the Bus At Three”

If only the hooligans had spent their spare change elsewhere. “Bus Money” by The Chats is the speed of Martha’s vibe.

“A Person of Chastity and Correct Habits”

I believe this story is set in the era of “Roses Are Red” by Bobby Vinton.

An adventure, based on a true story. “Roadrunner”, Modern Lovers.

I could do an entire soundtrack for this one alone, but in the interest of time and not going too far down the rabbit hole: “A Sunday Smile” by Beirut. All I want is the best for our lives my dear.

“Home Again with the Fire Out”

Way back in 2012, Tony at Fred’s Records in St. John’s recommended Andrew Bird’s Break It Yourself to me as the album of the summer. To this day when I hear “Fatal Shore,” I’m transported to Middle Cove Beach. Anyway. This story begins there, at night, with a bonfire and capelin.

“Send More Tourists, the Last Ones Were Delicious”

The title story. It’s about driving, but not really. It’s about life’s mishaps, maybe. And a good summary for the collection in general. The Doors “Not To Touch The Earth” hits the proper note here. Nothing left to do but run, run, run. Let’s run.

“Do You Love Me (Now That I Can Dance)” by The Contours. Because the person in this story could use some fun. And because folks with depression face a lot of stigma when they can’t do society’s dance.

“Three Men Walk into a Bank”

Maybe I just want you to watch the video of Kasabian’s “Fire” where they hold up a bank with guitars, but also: heist story.

Takes its inspiration from Roy Orbison’s song of the same name.

This story is like a fever dream, like “Starving in the Belly of a Whale” by Tom Waits. If this was a short film, Waits would play the guy with the flowers.

Phoebe Bridgers’ “Scott Street” seems like a good fit as the character in this story struggles with life’s eternal question: downtown or the ‘burbs?

“The Woman in the Yellow Dress”

Arcade Fire’s “Ready to Start.” The businessmen are drinking my blood, like the kids in art school said they would. I guess I’ll just begin again.

Funny the things that keep us up at night. “I Put a Spell on You” by Screamin’ Jay Hawkins.

“Mama You Been on My Mind,” ‘cause Mr. Moriarity is a child of the 60s. My apologies to him if he’s not a Dylan fan and I’m getting it all wrong. Anyway, Jeff Buckley did it best, I think.

A brief encounter with a cool teenager. “Rebel Girl” by Bikini Kill.

Two cubicle dwellers take an all-inclusive. “Black and White” by Parquet Courts. If you listen to this after you read the story and you detect sarcasm, you are correct. Mild apologies for the mind trip. Is the solitude I seek a trap where I’ve been blindly led? Tell me, where then do I go instead?

The plight of strays. Life and death. Kate Bush, “Running Up That Hill.” But The Chromatics version.

“Paul” by Big Thief. The things we do for love and acceptance.

“Marie Tu Pleures,” by Montréal’s Karkwa. Marie, you’re crying for nothing. Marie, your heart goes on. You know. All this stress, what’s that about? We’re all gonna die anyway.

Grab a copy of Tracey's short story collection Send More Tourists....the Last Ones Were Delicious to read along with this sweet new playlist. Many thanks to Tracey for providing the beats, and to Samantha at Breakwater Books for connecting us! 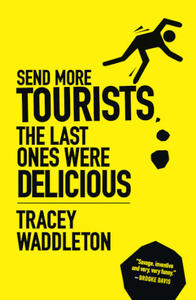