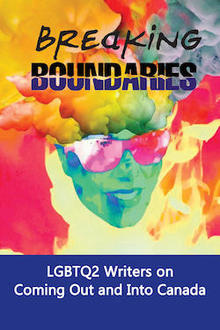 In a world where a majority of countries still criminalize and persecute LGBTQ2s+ people, Canada tops the list as a safe haven for the LGBTQ2s+ community. As we approach the commemoration of Canada along with the annual Pride celebrations, we chat with some of the contributors of Breaking Boundaries: LGBTQ2 Writers on Coming Out and Into Canada (Rebel Mountain Press), about what it means to be LGBTQ2s+ in Canada.

In Breaking Boundaries, 20 creative non-fiction writers and poets from across Canada share their personal stories of challenge and celebration. Some of the contributors are Canada born while others have immigrated or are refugees from other countries where they have been persecuted. Like the LGBTQ2s+ community, the anthology pieces are diverse, written by authors from all walks of life and who identify as lesbian, gay, bisexual, transgender, and 2-Spirited. It also includes stunning artwork by LGBTQ2s+ artists and allies and is nominated for the 2019 George Ryga Award for Social Awareness.

The following authors, interviewed by Breaking Boundaries Editor Lori Shwydky, live in Canada. Rainer Oktovianus is a refugee who fled Indonesia, where homosexually is illegal. Anne Hofland is a retired elementary school teacher from Ontario. E.T. Turner immigrated from the US. Austin Lee is currently teaching in BC.

Lori Shwydky: Who is the first person you told that you were gay? Their reaction? Why did you choose that person to confide it?

“My first girlfriend and I were outed to our parents by our own love notes. They were not happy and all hell broke loose.” –E.T. Turner

“When I was 17, I first told my friend, Heather, who would visit me in Toronto on weekends. I decided to tell her first because she lived out of town, which limited the risk for me if coming out to her went badly. She was not fazed by my revelation, and was quite accepting.” –Anne Hofland

“I didn’t have many friends at that time, but I felt safe among my community church best friends. Their reaction was very welcoming.” –Rainer Oktovianus

“The first person I told was my first cousin, who I was close with.  I knew that even if he was not accepting or happy about it, he would still be there to talk with me. He was quite surprised, which shocked me to be honest.” –Austin Lee

LS: If you have ever been “outed” unwillingly — who did it? What happened? What was your reaction?

“I am fortunate to have never been outed unwillingly.  It has always been my choice to share my sexuality.” –Anne Hofland

“Yes, by my own cousin. They told their parents and suddenly there was family judgment and drama. I felt betrayed and scared, yet free at the same time.” –Rainer Oktovianus

“My friends, who knew I was gay, introduced me to their friends. Eventually, through casual conversation about my dating status, they mentioned that I was queer/gay. It shocked me to hear it out in the open, especially without my consent given.” –Austin Lee

“As I recall, one of my co-workers let it slip to someone else. I was only out to a very few people at work. Needless to say, I was rather upset!”  –E.T. Turner

LS: Have you ever experienced homophobia? If so, give an example.

“After fleeing persecution in Indonesia, a homophobic country, I thought that we were safe in Canada. I was holding hands with my husband in Vancouver, minding our own business, when suddenly a lady shouted: “FAGS!” We were shocked and I thought we had misheard her, but she just kept repeating herself.” –Rainer Oktovianus

“Countless times over the years. I was called homophobic slurs, evicted from an apartment TWICE, hostile stares in public, co-workers warned not to go in the bathroom when I was in there. “ –E.T. Turner

“I was an elementary school teacher in the 80s and 90s, an era when homosexuality and pedophilia were synonymous. I was very much in the closet at work, fearing the loss of my job if members of the community found out that there was a gay teacher working with their children. One day, one of my colleagues breezily informed me that she and the principal were taking her Grade 8 class on a field trip, and they were going to drive them through a section of downtown so the students ‘could see the homosexuals’.” –Anne Hofland

“I was upset about my family struggling to understand my sexuality so I was walking at night with a friend. A car pulled up on the dark street and someone yelled out of the sunroof at us, ‘Austin Lee’s a fucking faggot!’  I didn’t know who they were. It was a really hurtful experience and I felt terrified and very exposed.” –Austin Lee

LS: How do you keep a positive attitude during difficult situations?

“During difficult situations, I keep a positive attitude by turning to my partner of 32 years, sharing my problems with her, and working through them with her support.  I use writing and art as ways of processing issues, exploring and expressing my feelings.” –Anne Hofland

“I don’t believe in playing the victim. Yes, I have gone through hell, but I survived and just get stronger. That’s when I help others in the same situation.” –Rainer Oktovianus

“It is difficult at times. There is still a lot of negativity despite the progress that has been made.  My spouse and I feel we are treated differently in the strata we live in.  The constant news from the US regarding anti-LGBTQ stuff, which is starting to spill over the border, is very disconcerting.  I find that I spend a lot of time feeling angry about it all.” –E.T. Turner

LS: What advice would you give to your younger self?

“I would tell my younger self to avoid feeling ashamed and worried about peoples’ opinions. I would also tell him to believe that he is someone that people would be lucky to know and spend time with. It is important to connect with other people authentically and not worry as much about sacrificing authenticity for acceptance.” –Austin Lee

“I would advise my younger self to have more courage, to speak up and defend the rights of LGBTQ people.  I would tell my younger self not to wait until I was 40 to attend my first Pride event, but to take to the streets and be counted, as there is power in numbers.”  –Anne Hofland

“Don’t ever change, all things happened for a reason. You did it baby!” –Rainer Oktovianus

A special thank you to Cheryl Ann at Rebel Mountain Press, Lori Shwydky and to all of the interviewed authors for sharing their thoughts and experiences with us. 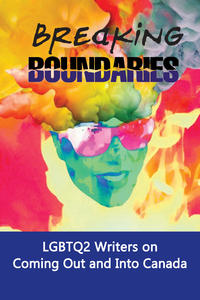 June 11, 2020
Under the Cover: Refugee stories and Ghost's Journey