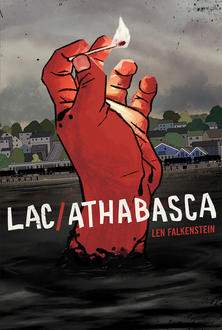 The multiple storylines and settings of Len Falkenstein's acclaimed play  Lac/Athabasca (Playwrights Canada Press) paint a picture of resource – especially oil – exploitation through the ages in Canada, and the effects it has on communities both resource-rich and job-poor. In this piece Len traces the path of the play and the Athabasca River, both – the story is entwined with this glacial geography.

Lac/Athabasca is a play that takes its audience on a journey across Canada, from the Rocky Mountains to a small town in northern New Brunswick, with many stops along the way. I’ll talk about three of the key locations in the play, places where the landscape is a vital and living part of both the sinews and the atmosphere of the work.

The play begins at the Athabasca Glacier in Alberta’s Jasper National Park. Part of the massive Columbia Icefield that straddles the continental divide between B.C. and Alberta, the glacier is a popular tourist destination, with motorized “snow coaches” taking busloads of visitors up onto the glacier several times an hour. But the human presence doesn’t really diminish the majesty of the place—it is that big and awesome, in the true sense of the word. From the lodge where the coaches depart the glacier hangs across the valley through the mist, a beckoning other world, the coaches crawling slowly up its face like ants. When you arrive and are given 20 minutes to explore (told to stay within the marked area to avoid falling down a crevasse and becoming a permanent addition to the centuries-old ice) the cold is profound, whatever the month, and the wind hits you like a brick wall, but everyone is smiling. Because you have arrived at a truly special place, a bowl between three mountain peaks, and just above you, if you could just get up there, is the whole rest of the Icefield, a world of nothing but ice as far as the eye can see. But you can’t get there safely so you just look at it from below, and imagine it, and drink the pure cold meltwater from the glacier. And get back on the snow coach and drive back to reality. That the glacier is rapidly disappearing due to climate change only adds poignancy to the journey.

The meltwater from the glacier turns into the Athabasca River, Alberta’s largest, which flows north to Lake Athabasca through the oil sands surrounding Fort McMurray, the second major stop on Lac/Athabasca’s journey. Here the river slowly winds and meanders through the boreal forest, the seemingly unendingly monotonous landscape of forest and rock that covers northern Canada from west to east. In McMurray the banks of the river are steep and the trees are charred from the massive forest fire of 2016. The shiny new boxy houses that have risen from the ashes of the fire sit in incongruous juxtaposition to the untamed curves of the river, but the big river is in turn dwarfed by the six lane highway that runs beside it, lined by an unceasing parade of massive trucks and buses on a round the clock journey north to the mine sites. There, the enormous industrial complexes of Syncrude and Suncor squat on the edge of the river, hectare upon hectare of shining metal and lights and belching smoke, drawing water from the river to turn sand into oil. In the First Nations community of Fort MacKay, children play on the banks of the river while the smell of sulphur hangs in the air, the lights of Suncor and the steady constant thrum of machinery in the distance.

The final stop on Lac/Athabasca’s journey, connected to the oil sands by thousands of kilometers of railroad, is the fictional town of Lac Madawaska in northern New Brunswick, nestled amid the rolling, thickly forested hills of Canada’s Appalachians, near another huge river, the St. John (or to the Maliseet, the Wolastoq). It’s a stunningly beautiful landscape that most Canadians have never seen, and that I fell in love with on my first cross-Canada road trip, the car rollercoastering endlessly up and over the big hills and along the curves of the wide blue river. On the streets of Lac Madawaska, French and English comingle and the storefronts are old and quaint, redolent both of aged dignity and the blunt, unremitting poverty of the region, poverty that drives the province’s youth west, to Ontario and the oil fields and tourist stops of Alberta.

Thanks so much to Len Falkenstein for writing this gorgeous, detailed journey of the real and imagined places that make up his play Lac/Athabasca, and to Jessica at Playwrights Canada Press for making the connection. For more Where in Canada, click here.