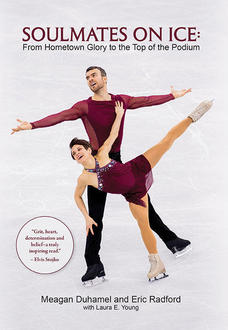 While nowhere near the dedication needed to achieve an Olympic medal (and three times, no less!), putting out a book in a shorter turnaround time is a publisher's own extreme sport. We went under the cover of Olympian and World pair Figure Skating champions Meaghan Duhamel and Eric Radford's book – the upcoming  Soulmates on Ice: From Hometown Glory to the Top of the Podium – with their co-author Laura E. Young and publisher, Latitude 46, to learn more about how this book got made while on the road.

Soulmates on Ice: From Hometown Glory to the Top of the Podium is the behind-the-scenes story of one of Canada’s most accomplished skating pairs. In the book, sports journalist Laura E. Young chronicles the unlikely path Meagan Duhamel and Eric Radford followed on the way to the top of the world in figure skating. The two-time world pair champions and three-time Olympic medalists reflect on how they developed a working relationship and honed their resilience in a sport that often left them bloodied and bruised. Ultimately, the two-time world champions earned the perfect, storybook ending to the sport they have adored since they laced up their first pairs of skates.

Putting the book together with a tight turnaround is another story. We typically like a completed manuscript at least six months before publication. Since Meagan and Eric’s story was still unfolding in early 2018, the manuscript remained a living document until many months after the 2018 PyeongChang Olympics. Meagan and Eric needed some space to reflect on their careers and what it all meant to them. Author Laura E. Young had to ask the right questions at the right times.

Here we reflect on some of the inner workings of writing and production and meeting deadlines.

Let’s write a book with two Olympians in their final competitive career during the Grand Prix skating series, Canadians and the Olympics. Why not?

Meagan Duhamel, Eric Radford, and I did just that, finding pockets of time from September 2017 to June 2018. I was religiously devoted to a detailed outline. I spent two days in Montreal in September 2017 grounding myself in the project and conducted the only in-person interviews done for this book. The first afternoon Meagan and I sat for an hour in a nearby Second Cup which she knew served soy milk for her coffee. Eric and I had tea one night at a Starbucks. We spoke at the arena where they trained. Then I went home and we all began to meet over Skype, individually.

The five-week Ontario college strike freed me up to write the book and would not impact my students’ work. Meagan and Eric had time in between Grand Prix events so the bulk of the hard memoir work and interviews was tackled during the strike.

Most interviews occurred at night for about an hour. The day’s fatigue seemed to lend a sense of intimacy, even over Skype. The lighting was low, Meagan was usually at a table, always drinking from her pink water bottle. On occasion we would both pause to go to the washroom. Sometimes she spoke to her dogs.

Eric was either sitting on his couch or lying down. Once Eric spun his computer around so I could see his piano. I felt like I had been let in to see something really personal and laden with secrets.

Most times it seemed like I just had to plug them in and let them go. I sent detailed questions of what I wanted to tackle but often the questions weren’t read until we were interviewing.  The toughest questions came when we talked about June 2017, when they left their coach Richard Gauthier. They stayed with Bruno Marcotte, who is also Meagan’s husband, and his sister Julie Marcotte. I remained neutral and asked open-ended questions: What if people said you only stayed because Bruno is your husband and Julie is your sister-in-law?

We spoke little after January when they disappeared into a bubble, won their seventh Canadian title, a record, and then two medals at the Olympics with four clean skates, and an Olympic first in landing the throw quadruple Salchow.

Post-Olympics, Eric reached out to touch base, but he was too exhausted to be interviewed. It took us weeks to get back on track and I personally struggled to get the flow going again. The conclusion was still unknown. How would we close the book on their competitive skating lives?  Eventually, almost like magic, the perfect ending revealed and wrote itself in June 2018.

Working with these two Olympians for a year taught me many things, like going with the flow, taking baby steps towards reaching a goal, asking yourself what more you can do. Working with two pairs skaters also taught me about trusting your partner. We will get the job done. And we did."

“It was an intense skating season for us but somehow we managed to find time to be interviewed by Laura Young. Fitting in a Skype interview while we were at home or on the road wasn't always easy. Personally, I never found it to be distracting. I found it fun to reminisce and even analyze parts of our career that I hadn't given very much thought to.”

“We are delighted to support Meagan and Eric in telling their story at an important time in their lives. In the production phase, collecting the photos that most readers haven't yet seen was exciting. They tell just as much of the story of these two talented and determined athletes. Photos like Meagan's first skate at three years old, Eric as a young gymnast in a small northern mining town, added to the narrative in a visual way. When it came down to production deadlines, all the pieces fell into place.”

Thanks so much to Laura, Eric, and Heather for their stories behind  Soulmates on Ice, and to Laura Stradiotto from Latitude for putting them all together. For more stories behind the story, click here. 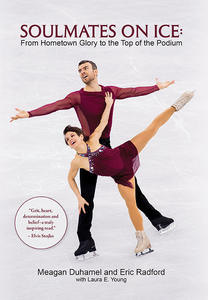 November 28, 2016
Roller Derby by the Numbers: or, How I Broke Up With My Scale and Committed to the Flat-Track