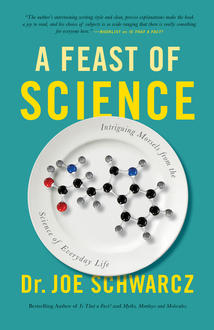 Under the Cover: A Feast of Science

In his newest book  A Feast of Science (ECW Press), chemistry professor, radio-show host, and science personality Dr. Joe Schwarcz sets out to dissect some relevant and popular scientific curiosities like whether "chemical" means toxic, natural products and good health, secret cancer cures, and more. Today we excerpt two tidbits from the book to demystify a slimy wrinkle solution and a hot environmental argument.

"Creams that contain snail slime are a hot item in South America and Korea and are slowly slithering their way to North America. Sounds like another slimy marketing effort, but don’t roll your eyes quite yet. It seems Hippocrates favored a mix of sour milk and crushed snails for inflamed skin. Of course that doesn’t mean it worked. After all, the man who gave us the Hippocratic Oath also thought that pigeon drop-pings cured baldness. But there may be something to the snail gambit. Apparently Chilean farmers who were raising snails for the food market noted that their skin became smoother after handling the creatures. Not exactly scientific evidence, but enough for the cosmetic industry to pick up some speed in marketing snail slime.

The slime is a complex chemical mixture that contains proteo-glycans, glycosaminoglycans, and a variety of enzymes. There’s also hyaluronic acid, some copper peptides, and anti microbial compounds. All these combine to protect the snail from cuts, abrasions, and bacteria. But what can they do for people? There is actually evidence that at least some slime components can stimulate the proliferation of fibroblasts, the cells that produce collagen and elastin, the proteins that form the basic matrix of skin structure. The problem, though, is that these effects have only been seen in cell culture. There’s no study that has documented a benefit from snail cream in people. Even without such evidence, some producers claim to have a superior product because their snails are raised on ginseng!

And how does one get snail slime? It seems the snails have to be stressed to secrete the sticky stuff. I’m not sure how one stresses a snail — perhaps by signing it up for a race, or by frightening it with one of those dishes with the six little wells ready to be loaded with escargots. Eventually we may actually see some scientific evidence for the benefits of snail cream, but while the hype races ahead at breakneck speed, the research seems to progress at...well...a snail’s pace."

Plastic Bags: Are they a major environmental scourge or do a minor woe?

"There’s no question that plastic bags are a symbol of our throwaway culture and are an inviting target for scorn because they are a visible sign of pollution. They can be seen fluttering from trees, floating in that much-publicized patch of plastic detritus in the middle of the Pacific Ocean, and clogging sewers in parts of Asia. But the bags don’t dive into the ocean, jump into sewers, or take flight without help. Human help. We are the real problem. With proper recycling, reuse, or disposal, benefits can outweigh risks.

What then are the perceived risks? Arguments usually revolve around the bags being made from oil, a nonrenewable resource, the plastic being nonbiodegradable, the bags taking up space in landfills, the bags being unnecessary because of ready replacement by paper or reusable bags, and the bags leaving a large carbon footprint. Disposable bags are made of high-density poly-ethylene (hdpe), which is manufactured from ethylene derived either from petroleum or natural gas. In Canada, the source is usually ethylene made from ethane, a component of natural gas that otherwise is commonly burned off.

Plastic bags do not biodegrade in a landfill, as we are often told. This is true, but modern landfills are designed to have a low oxygen environment to prevent biodegradation that would result in the formation of methane, a greenhouse gas. The purpose of a landfill is to seal in the contents and prevent substances from leaching out. Since plastic bags are highly compressible, they take up very little volume in landfills. In any case, plastic shopping bags are estimated to make up less than 1 percent of litter.

Paper shopping bags do not biodegrade in a landfill either, and because of their greater mass they are a greater burden on the waste stream. Paper manufacture is an energy-intensive process and requires the use of many chemicals. Cradle-to-grave calculations generally show that plastic bags have a lower carbon footprint than paper bags. “Biodegradable” bags are a marketing scheme; they don’t degrade under normal conditions.

But why should we make an issue of plastic versus paper? Why not rely on reusable bags? Here too, the issue is not as simple as it seems. A cotton bag would have to be used about 130 times in order to have a carbon footprint that is less than that of a plastic bag. Growing cotton requires more pesticides than most crops, and processing and transport require a great deal of energy. If the plastic bag is reused to line your garbage can, a cotton bag would have to be used over 300 times to have a lower global warming potential."

Thanks to Ana at ECW Press for providing these fascinating excerpts from A Feast of Science, and to Dr. Joe Schwarcz for giving permission to share them. For more Under the Cover, click here.

May 20, 2020
Poetry Grrrowl: An Unorthodox Guide to Wildlife + Katie Vautour