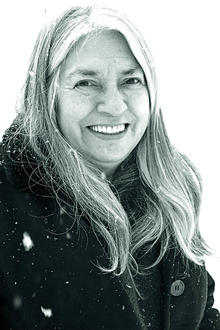 It is so difficult keeping up with the explosion of new authors in the indigenous world these days. What is particularly heartening is the number of award-winning young authors who are women. There is still a great deal of sexism in the industry; however, the industry is beginning to recognize more and more indigenous women writers as sexism and racism wane.

Before anyone groans, I want to point out that most of the awards until recently have gone to men despite the fact that women were the trailblazers for indigenous writing for at least a decade. Beatrice Colleton who did not win awards for her efforts 44 years ago wrote the first novel, April Raintree, and it outsold other indigenous books. It continues to be a significant work as Canada continues to apprehend and separate indigenous children from their mothers. Books like Slash, Bobbi Lee Indian Rebel, Half-Breed continue to sell though none have won awards. Even in recent times, such giants as Eden Robinson, Marilyn Dumont, Joanne Arnott, and Louise Halfe are clearly not as recognized as their male counterparts. I am aware that men sell much more books than women no matter what their racial background is, so the country is still gendering book buying. The worst part of that is that the book buyers are predominantly female. That aside there has been some terrific changes.

Liz Howard won the Griffin Poetry Prize in 2016 for Infinite Citizen of the Shaking Tent, but Joy Harjo did not. In 2017 and 2018 two men, Jordan Abel and Billyray Belcourt followed her. Billyray reminds me of the American Beat poets practice of liberal cursing that began with Henry Miller. Liz’s work is clean and free of the cursing and occasionally includes an Anishinaabe word. Harjo, on the other hand, plays with music in all forms and genres, including indigenous ancient oratory, song, and the lyrical storytelling of Muskogee Creek.

"I am so far behind the eight ball here that I had to ask my grandchild what a graphic novel was before I could purchase and read it. I see why they call it a graphic novel; the art was so powerful in presenting the story that it took my breath away."

Katherena Vermette was shortlisted for the Governor General’s Literary Award for her amazing novel The Break but did not win; but then she won the Amazon First Novel Award in America. (I love The Break as it is written like a metis winter story; very beautiful, lyrical, and literary.) The Amazon First Novel Award had a purse more than twice the size of the Governor General’s Literary Award. Cherie Dimaline won both the Governor General’s Literary Award in the Young Adult Fiction category for The Marrow Thieves and the Kirkus Prize in the US; Gregory Scofield and Eden Robinson won what Eden called the Middle Aged award—Mid Career award, in fact. We laughed, but we were so proud of both of them. A young indigenous man, Robertson, won the Governor General’s Literary Award for his graphic novel Okay. I am so far behind the eight ball here that I had to ask my grandchild what a graphic novel was before I could purchase and read it. I see why they call it a graphic novel; the art was so powerful in presenting the story that it took my breath away. Then my niece Zena Shulz (no award) did an amazing short little graphic novel and then took up film making. My other niece, Zena’s sister, has a bestseller in both the U.S. and Canada from the moment her memoir Heart Berries hit the shelf. Although all of the foregoing have won many awards since, I am going to stop here and talk about what I think is different now, than when the indigenous writers were struggling to be seen, heard, and purchased.

Leanne Simpson broke the mold when she wrote, Dancing on Our Turtle’s Back. She braided poetry with expository and scholarly narrative. It was not the first time someone did this, but it was done without apology and it is an amazing piece of work. It may not have been such a popular piece of work, but Thomas King noticed it and gave her a nod by way of sharing the RBC Taylor Prize with her as his choice for emerging writer.

"If we are to be independent nations, we must read, all of us. Our children need our stories. If Canada is to get past its prejudice, it must read not about us but by us."

What all these writers share is a commitment to indigenous literature and a concern for the issues facing us. Most of the young writers today have a deep and abiding commitment to their communities and as Billyray Belcourt suggests he did not win despite being indigenous; he won because he was indigenous. There is excitement in the air as some of the older writers gain the recognition that was so hard won and the younger ones are recognized in a much fairer and more representative way—our youth are excited that maybe they can make a living as artists.

This excites me too. I am aware that it takes thousands of books to educate a child from Kindergarten to university. If we are to be independent nations, we must read, all of us. Our children need our stories. If Canada is to get past its prejudice, it must read not about us but by us.

As I witness this explosion of award-winning literary work, I think of my grandfather, the first spoken word and music artist when he said; “You come to the table full banquet, if you do speak from your culture; you are depriving Canada of your intellectual food, their birth right.” He did not mean this as permission for Europeans to plunder us of the last of what we owned, but to use our culture to walk forward into the future together. I also think he meant that our word art is equal to theirs, that the way we tell story is literary, that our poetry is worthy of study and designation as art. It has taken almost 50 years for Canada to accept our storytelling and poetry as valid, as literature. This means many more of us will step up to the plate. I imagine literary works in our language in the next wave of writers. Our writing will change this country, the way our oratory changed them almost two hundred years. We will make a revolution without firing a shot, the way our young people are making a revolution without firing a shot today.

My doctor says I could live to be 92 years old—25 more years, humph, maybe I will be around for this, maybe not, but in any case, it will not be me leading the charge as if I was in my twenties as I had with Maria Campbell decades ago.

North Vancouver–born Lee Maracle is the author of numerous critically acclaimed literary works, including Sundogs, Ravensong, Sojourner’s Truth and Other Stories, Bobbi Lee: Indian Rebel, Daughters Are Forever, Will’s Garden, Bent Box, Memory Serves, I Am Woman, and Talking to the Diaspora. Her latest book is My Conversations with Canadiansand was a finalist for the 2018 Toronto Book Awards and the First Nation Communities READ 2018-19 Award. Her next book, Hope Matters, written collaboratively with her daughters Columpa Bobb and Tania Carter, is forthcoming from Book*hug in 2019.  She is the coeditor of a number of anthologies, including the award-winning My Home as I Remember. A member of the Sto:Loh Nation, Maracle is a recipient of the Order of Canada, the Queen’s Diamond Jubilee Medal, the JT Stewart Award, and the Ontario Premier’s Award for Excellence in the Arts for 2014. In 2018, she received both the First Peoples Literary Prize and the Harbourfront Festival Prize. Maracle is currently an instructor in the Aboriginal Studies Program at the University of Toronto, where she teaches Oral Tradition. She is also the Traditional Teacher for First Nation’s House and an instructor with the Centre for Indigenous Theatre. Maracle has served as Distinguished Visiting Scholar at the University of Toronto, the University of Waterloo, and the University of Western Washington, and received an Honorary Doctor of Letters from St. Thomas University in 2009. Maracle lives in Toronto.