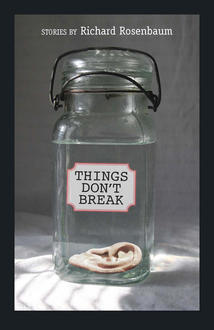 In his debut collection Things Don't Break (Tightrope Books) Richard Rosenbaum takes readers on a short-story ride with tales about robots, videogames, and evil chickens. We chatted with Richard to get the scoop on short fiction as a form and the associated "dopamine-burst reward response" that comes from completing a story, his favourite writers, and more. Read on for our interview with Richard and an excerpt from his collection.

RR: Lots. Let's see. What I look for in a short story writer is someone who can successfully cram a complete idea into a small amount of narrative. So many writers' stories can be excellent in terms of the quality of the prose but they read more like just gossip about fictional people, which doesn't interest me at all. A few writers that I love and have learned a lot from reading, who are great at creating compelling characters in stories that are actually about things are: James Joyce, David Foster Wallace, Jonathan Lethem, Flannery O'Connor, Zsuzsi Gartner, George Saunders, Haruki Murakami, Etgar Keret, Ted Chiang...

RR: There are lots of little advantages to writing short stories, like you can try out all kinds of different lengths and ideas, it's more forgiving of experimentation, and you can use up all the story titles that accumulate in your head. But the biggest thing—and I think this is maybe true of reading short stories as well as writing them—is that because each one is a complete unit unto itself (even if it's also part of a collection), the sense of accomplishment for having finished one, that dopamine-burst reward response, is greater than finishing some arbitrarily defined sub-unit of a larger work, like a chapter of a book. It's its own little town with a name and a population and not just a signpost on the way to somewhere bigger and more important. If you're the kind of writer who doesn't so much like to write as likes to have written, as Dorothy Parker said, that's a major advantage.

ALU: Have you ever abandoned a short story you were writing? Why? What was it about?

RR: I don't like to think of them as abandoned, because I always tell myself that eventually I'll get back to them as soon as I figure them out, but yeah. Sometimes you've got an interesting character or a cool idea but you can't seem to make them do anything worth reading about for ten or however many pages so the story just hangs out kind of pacing around and shrugging its shoulders at you. One in particular that I really hope to return to was about a past-life regression clinic that sets up inside a pet store. We'll see about that one.

Excerpt from "If you're reading this, I am alive" from Things Don't Break

IF YOU DON'T STOP DRINKING, YOU ARE GOING TO DIE.

If I had started taking the medicine when I should have, when I first understood that I really had a problem—thirteen years earlier or ten or two, or even if I’d started taking the medicine just one year earlier—who knows what I could have accomplished, what wouldn’t have seemed too scary or too impossible, what I would have created instead of hiding away under the covers waiting for the monsters like I did. If you wait long enough, the monsters always come.

If the sun went out right now, it would take eight minutes before anyone here on earth even noticed, and by then it would be way too late to do anything about it. If the dinosaurs hadn’t died out, do you think they would have evolved into sentient beings like us, with language and art and religion and war? If an asteroid like that were to strike again today, we’d end up just like them. If we start sending colonists to Mars as soon as technologically possible, do you think we could save ourselves? If the dinosaurs had stuck around, would they have gone to Mars, do you think?

If I’d lied instead of telling the truth … do me a favour: next time, remind me to lie.

If you hadn’t been so hung over, I guarantee that you would have done great that day. If your parents had known how to show you love, none of this stupid needless bullshit ever would have happened; you would be happy and healthy and successful right now instead of vomiting down the front of your dress twenty minutes after last call.

If we start a band, it should be called Laura Palmer’s Boobs. If you listen very carefully, you’ll hear somebody whispering goodnight to their children at seven minutes and fifty-six seconds into the final track on the debut album.

If you write one page per day, by the end of the year you’ll have a novel. If readers will forgive a little gimmick here and there, I have a pretty good idea for one, I think. If I am ever unable to make my own medical decisions, listen, I don’t want to “die with dignity,” okay, promise you will make those doctors plug me into every machine they can find—respirator, dialysis, that heart machine thing, air conditioner, PlayStation, vacuum cleaner, George Foreman Grill, everything, all of it, those are my wishes, and I expect you to honour them. If I die before I have the chance to do it myself, please burn all my journals and papers, my hard drives and DVD-Rs—that is what I would have wanted.

Richard Rosenbaum is the author of the novel Pretend to Feel (Now Or Never Publishing), the novella Revenge of the Grand Narrative (Quattro Books), and of Raise Some Shell (ECW Press), a cultural history of the Teenage Mutant Ninja Turtles. He is also a regular contributor to the popular culture analysis website Overthinking It. He lives in Toronto.

Thanks to Heather at Tightrope Books for sharing this work with us, and to Richard for answering our questions. Stay tuned next Thursday for another Short Story Month feature! 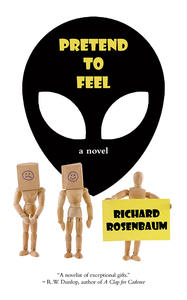 May 24, 2017
Short Story Month: The Midwife of Torment & Other Stories