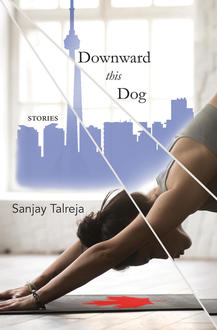 The characters in Sanjay Talreja's short story collection Downward This Dog (Mawenzi House) might be described as "yearners": immigrants across Toronto and parts of India that yearn for protection, freedom, wealth, success, and more. We talk to Sanjay about his love for the short story form and the authors who inspire him in our interview, and read part of "Love is All There Is" from the collection.

ST: Premchand, Somerset Maugham, Chekhov, R.K Narayan, Rohinton Mistry, Ismat Chugtai, Manto, Maupassant, Saki, Alice Munro; all of whom are brilliant at getting under the skin of the everyman: the everyday world of contradictions, paradoxes, half knowledge, falsehoods – smiling and winking as they watch us muddle our way in the world. There is no smugness or superiority that permeates their work; they are not looking down as much as coming along with the characters, foibles and all.

I also greatly value their unpretentious, uncomplicated style – a highly undervalued skill – and their ability to still preserve sophistication in thoughts and ideas despite choosing a certain simplicity in their use of language. Irony, wit, and the way the unexpected intrudes into their stories by offering a delicious pang of recognition, is often delightful.

ST: That one can be very playful and attempt a variety of authorial voices; that several lives can be “visited” across the collection of short stories; that the short story writer has to get to the point quickly and yet be subtle about it. I also love their unpredictability – the form allows for a tremendous range of genres, tricks, twists, styles.

ALU: Have you ever abandoned a short story you were writing? Why? What was it about?

ST: I have a desk full of abandoned short stories. I gave up – sometimes with despair, other times with relief – as the stories just didn’t feel right. Sometimes they felt too rushed: the idea may have been good to begin with but I couldn’t find a way to say too much more about it. At other times, I couldn’t sustain my own interest in what I was writing. Sometimes, even if it did end up become a finished short story, I came to the grudging conclusion that it lacked rhythm, pace, depth, soul – which couldn’t be fixed despite all effort.

But the other lesson I’ve learned that even if it is abandoned, nothing is ever wasted… “orphaned” characters and plots sometimes show up in unexpected places, by worming and nudging their way into a new work, giving me a great appreciation of the creative process.

Excerpt from "Love is All There Is" from Downward This Dog

What is it that they say about the world? Is it a circle? Do the same things happen again and again, without our knowledge, over generations, and will they keep occurring until the end of time? Or is it a spiral? One thing building upon another, turning, twisting, going up, like a dizzying corkscrew—things appear the same but are quite different and nothing repeats itself?

This is what happens: a man’s brothers and sisters leave for a neighbouring country, which, at one time was a province of the first country. The original nation has been split into two and families, lives, destinies, desires and anxieties have been torn apart. It hardly needs to be said that the new country is an enemy country.

But the man stays behind. He is the eldest son and generations of his ancestors are buried in the city graveyard, and he loves the humid air and the roar of the waves crashing in the ocean, and the monsoon clouds scudding across the sky. Friends and relatives try to convince him to leave but he is determined that he will not go to this new place, lines artificially carved on a map, borders ripping through villages like daggers through hearts.

His younger brothers have no such thoughts. Not wanting to hurt the feelings of a respected elder, they make plans in secret and, as soon as they can, they head out. The man is distressed. Much to his further disappointment, he finds out that his sisters too have departed, also furtively, although their husbands had promised never to leave the old country. His heart is broken. He cannot understand how this could happen. This is where they took their first breaths, were swaddled by ayahs, played on the streets; it is on these footpaths where they furtively held hands with their first girlfriends, took sweet drags from tossed-out cigarettes picked up from street corners, sucked on big mangoes and chewed on crunchy, fiercely smelling fried fish . . .

–From  Downward This Dog by Sanjay Talreja (Mawenzi House, 2017)

Sanjay Talreja is a Toronto-based filmmaker whose drama and documentary work has appeared on television and theatrical screens in Canada, the US, and India. He has written a collection of short stories and a novella, and is completing a detective novel. He has won several awards for his films.

Thanks so much to Sanjay for candidly answering our questionnaire, and to Sabrina at Mawenzi House for providing this excerpt of Sanjay's work. Stay tuned every Thursday in May for more short stories and interviews, and catch up on our series here. 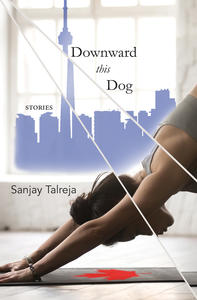 February 24, 2021 by Denise Davy
Short Story Month: Outside People and Other Stories by Mariam Pirbhai