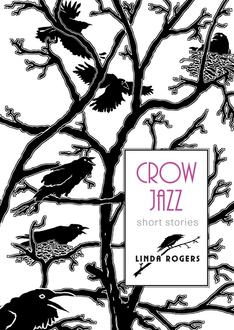 We sit down with the effortlessly hilarious and impressively prolific Linda Rogers, whose latest,  Crow Jazz (Mother Tongue Publishing), is her 29th book but first short story collection. We talk about short stories as letters, never abandoning your work (even if it just becomes work for one's self), and read some of the story "Darling Boy" from her collection.

LR: I accuse Alice Munro of greatness, even though her line is often un peu flatline Ontariario for me, her "Dance of the Happy Shades" is a masteriece of empathy. Sinclair Ross's "The Green Door" is a snow dance, the slow melting horrific choreography of fate. James Joyce, "The Dead," is a lesson in crafting the human comedy. Geoffrey Chaucer's defiant portrait of the Wyfe of Bath is my feminist manifesto. Lady Murasaki's Tales of Genji, albeit considered the first novel, is masterful arcs of psychological and phenomenal description, exquisite painful and beautiful pieces of life. All of the above writers confirm that character writes plot, that we live one life, a common gestalt of infinite shades in a holy matrix of compassion.

LR: Surprise to me, I love it. When my egg donor gave me pencils and paper and told me to write it all down because I had verbal you know what, I spilled and then I prayed for forgiveness. The spills are novels, the prayers are poems. I never thought of short fiction because I thought that required discipline, which is my deficit. I started writing short fiction because I fell in love with Anderson Cooper, who is the very image of my beloved brother, Dana. You don't have space for the long story. Needless to say, I am addicted and now I remember my dear friend of blessed memory Adele Wiseman telling me I wrote the bestest letters. Later I found out she got paid for them when she sold her papers. My kids' teachers said my "please excuse my absent kid" letters were lies that made their dreary lunchroom rock with laughter. So, I think my short stories are letters. From me to you.

ALU: Have you ever abandoned a short story you were writing? Why? What was it about.

LR: I aborted several children by accident, so, even though I am not against abortion, I am against aborting anything I have set out to make. When I can't find the baking powder, I make the cake anyway. Goddess might lift it up. Hot air might lift it up. Words will lift it up.That is when I say a prayer for my cake and carry on. Even if the story has no oxygen, I finish it because I am a finisher. Not finishing goes against nature. It is letting go of the baby you want to live. I don't have to publish it. I don't have to share the bad cake. I can sit at my kitchen table and eat every damned crumb. ALL OF IT, because waste is influenza (against the stars).

I didn’t feel a thing. Hair doesn’t have feelings. Not even red hair. Not even when I’m stoned. Especially when I’m stoned; and that’s an important detail because the cop who went to the Cop Oscars for arresting that famous bank robber dragged me all the way up the cliff from Mile Zero by my ponytail the night me and my buddies got busted for hanging at the beach.

I’m a ginger, and that means hard to stone, hard to put out for surgery, but easy to piss off.

But I’m not. Pissed at Daisy. Fair is fair. I have all the advantages. I can remember the magic numbers to get in and out. I get to choose the books we read and the food that I eat. Daisy just got it in her head she wanted some kind of keepsake, snuggled up close as if to see the pictures in the book about Wounded Knee, and gotcha, I was missing some ginger and she was dancing inside a circle of Dementia Girls whooping like Sitting Bull’s warriors. Lucky I was wearing my magic shirt full of roach holes that never burned me. Who knows, she might’ve thought of hacking off some skin.

“Where’d you get these?” I put down our book, got up, disarmed her gently, and brought her back to her chair. Daisy doesn’t need scissors. People come in to fix her hair and her nails. The nurses chop up her food. She put her handful of my crowning glory in her pocket with a smirk I would never call a smile. It was pure naughty.

“No more ghost stories,” I warned her. “They give you bad ideas.”

“You mad at me?” She grabbed my hand and kissed the fish webbing between my fingers. Ginger on speed, they said before I quit swimming. How many husbands did she waste? Daisy can charm the seeds out of a nickel bag.

“I’m mad about you,” she said, half-singing, so I knew it was an old tune. Daisy is a human jukebox. I wish I had half that number of songs in my head.

Matt the physio says we’re an item. That’s a relief to him because all the other ladies stalk him. It started when he asked the Dees to make like they’re windshield wipers and she couldn’t get her arms going in opposite directions.

“Unison’s good,” I said, and we did it together. That got her laughing.

“She never laughs,” Matt said, and that was how I got off janitor duty and became her special reader, even after my hundred hours were up. We have a connection. She calls me Darling Boy because she can’t remem- ber my name. That’s ok by me. When you’re a ginger with your name on the cop blotter, anonymity is a true endorphin hit.

Daisy does remember some things. Unison got her going. Her brain is wired for opera. A nurse gave her earphones so she could listen in private; but she sings along, and we all try to get through it without wetting ourselves, especially when she dances. She’s dem bones dancing.

I like reggae myself. Daisy made a face when I downloaded a bunch of tunes, but she did get up and shake her moneymaker, or the handful of skin that’s left of it. Matt laughed his face off.

“You got her number all right.”

“She’s got mine too.” I make like I’m dialling up the lonely muscle on the left side of my ribcage. Daisy is cool with me, and she never tells me to do my homework, go to school, cut my hair or quit smoking ganja. That would be my business. I’ve taken charge of my life, and I have a new family, all friends, and no blood relations.

In a way, it was her idea to get me working with the dementia team. One morning when I was still chipping off my hours with a broom, I found her redecorating the dayroom, moving the chairs around. You’ve got to know, some of those chairs, especially the La-Z-Boys, are heavy, and she’s a small lady. Just to give you a picture, I’ll tell you she’s about a handspan over five feet tall, and she eats as much as an ant can carry in one load. Daisy wears yellow, and she smells like dandelions. Even when she’s just had her hair done, she wears a sunhat with fake flowers stuck in the band.

“Awesome, you’re a monster,” I said, watching her motorize chairs, wondering what she was on. “What’s up?”

“We need a meeting.” Daisy wasn’t even puffed out. This is the lady who calls her visits to the washroom “hikes.”

“You know,” she said, one of her two standard answers. One is “You know,” and the other is “Sometimes yes, and sometimes no.” Either way she avoids making mistakes. I think she is way more with it than she gets credit for. I should have answered like that at school. They might’ve thought I was Einstein throwing the questions back at them.

She let go of the chair she was scraping across the linoleum (“It’s got to be linoleum because some of the girls pee themselves,” she’d confided) and whispers, “We’re all prisoners here. They won’t let us back into Canada. It isn’t fair. We’re Canadians.”

“So we’re going to have a revolution,” she announced, Daisy proud of Daisy for dialling the right word that time.

“Oh.” That’s what I got for reading her stories about Che, Louis Riel and Sitting Bull. Back in Canada, I’m willing to bet she voted Conservative but in Deeland, Daisy’s gone rogue. I wondered if I should sneak in a joint. It might help with her constipation.

“What am I going to do?” At this point in my life, I feel I’ve got as much potential as ice cubes in hell.

Linda Rogers is a novelist, essayist, editor and songwriter and also past Victoria Poet Laureate and Canadian People's Poet. She has published twenty-nine books, appeared in a number of anthologies and been awarded national and international literary prizes. She lives in Victoria, taking dictation from her crow friends.

Thanks so much to Linda for gamely answering our questionnaire, and to Mona at Mother Tongue for providing us with this excerpt of  Crow Jazz. For more Short Story Month features and reading, click here.