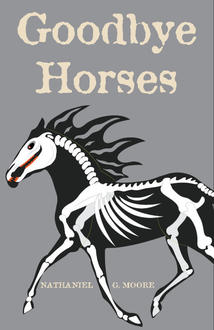 Gaius Valerius Catullus is arguably one of the most infamous ancient Latin poets, but also very much an enigma—even his death is shrouded in mystery. Nathaniel G. Moore's new collection Goodbye Horses (Mansfield Press) revives Catullus' remaining poems painting a vibrant picture of a candid poet and hopeless romantic.

My first poetry book in nearly a decade, Goodbye Horses is actually the second installment in what I am calling My Original Catullus Trilogy, beginning with Let's Pretend We Never Met (Pedlar Press, 2007) and ending with a novel entitled Transcripts of a Roman Seance (not yet published) in which a literate slave conducts a seance to talk to Catullus for his master's birthday. For Goodbye Horses and my "reanimations" of Catullus' poetry, I studied not only the Latin (which I took in high school) but the varying English translations and academic essays (some hundreds of years old) about the individual poems, the origins of vocabulary used and other details. These essays were rich in obscure facts about the types of meals the Romans had and at what time, what certain words referred to and how Catullus would steal from the Greeks and use his own Celtic "slang" for certain words. I wanted the poems to sound authentic, so I didn't use any pop culture signifiers or anything overtly contemporary to weigh things down like Morrissey, for example, used in "Bigmouth Strikes Again" in which he envisions Joan of Arc listening to her Walkman (an obsolete way of listening to music on cassettes). I didn't want to use that gimmick so I didn't. I'm interested in using words and ideas and limiting myself to those from his era. I'll be carrying this tradition on into the novel, which will be entirely based in the 1st Century BCE where the birthday party will take place, with flashbacks to Catullus's time a century earlier. I used the sonnet a lot in Goodbye Horses, and the title poem is a heroic crown of sonnets which is very difficult to pull off—much like a triple axel. (Just call me Tonya Harding!)

I have a dense essay/afterword in the book which I'm quite proud of. It reminds me of that old Leonard Cohen documentary from the 1960s in which Cohen is asked how he faired with his interview with Pierre Burton. Cohen says something like, "He wanted me to cut out my con...Come on Leonard Cohen, we know the party line about poetry, but tell us the truth, is wrestling really fixed?" Catullus loved Greek myth, his friends, his family, his lovers and until it ended, his life. I often wonder had he lived into his 60s like Martial, (a Spanish poet who lived a century later) would Catullus have damned his earlier work and segregated it from his entire decade-spanning career of letters? But like Rimbaud, Catullus only wrote for a handful of years before his death in his thirtieth year. (Whether he was 29 or 30 remains a mystery). A study recently suggested the music you listen to at 20 will be with you forever. Well, to cut to the chase, that's when I discovered Catullus. He adored the female author Sappho and mimicked her work to impress his poetry writing, husband-having, dancing mistress Clodia Metelli. He enjoyed teasing politicians and other serious bores. What's not to love? What's not to emulate?

Thanks to Nathaniel Moore for regaling us with stories of Catullus and poetry from Goodbye Horses (Mansfield Press). For more about Catullus and an interview with the author, click here.