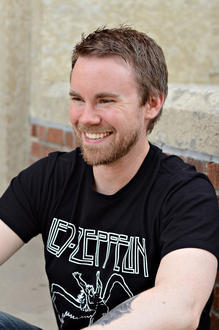 I’m a natural contrarian, a born shit-disturber. My first instinct is always to contradict: if everyone else says yes, my first thought is no. Out of politeness—an overrated Canadian quality—I don’t say these things. Instead, I save them for my writing.

I take great pleasure in provoking people through my stories. I was born deaf, and my deafness has not only helped preserve my shit-disturbing tendencies by protecting my fevered brain from insidious talk; it is, at least in part, responsible for those tendencies. My disability and the perspective it gives me provide me with a unique vantage point for upsetting narrative expectations. This vantage point is particularly useful when writing satire.

Eight years ago, I was in the middle of my PhD program at the University of Saskatchewan. For my dissertation, I studied the way seven Canadian novelists—all but one of them able-bodied—portray disability. As I studied their novels—which included Timothy Findley’s Not Wanted on the Voyage and Ann-Marie MacDonald’s Fall On Your Knees—I began to ask myself a number of questions that I couldn’t satisfactorily answer in an academic context. What if disability was the main meat of the narrative, rather than just a convenient plot device? What if disability governed every narrative choice, from character and structure to word choice and tone? How could I provoke people into thinking about disability differently? How could I write a story about disability in which the disability is not “solved,” but rather exacerbated, and on purpose? How could I put all these thoughts together to throw shade on other disability narratives? My first novel Mantis Dreams: The Journal of Dr. Dexter Ripley grew out of these questions.

With Mantis Dreams, I set out to undermine, ridicule, and outright decimate disability stereotypes. I wanted to show the vitality of a disabled perspective, all while thumbing my nose at able-bodied authority. To accomplish these things, I needed a gleefully disruptive protagonist, someone who enjoys discomforting people and relentlessly questioning their values. Enter Dexter Ripley, English professor, provocateur, and proud disabled man.

Dexter is my Duddy Kravitz, the creation I’m most proud of. Through Dexter, I wanted to disturb the reader in two ways: by showing a disabled man to be obscene, sexual, confrontational, and unapologetically vigorous; and by subtly mocking traditional novelistic structures. As Mordecai Richler, Lynn Coady, and all other satirists know, one of the first rules of satire is to offend everyone, and Dexter does exactly that. He insults family members, denigrates fellow professors, mocks his students, and belittles his fellow residents at the care home he lives in through his caustic comments and vile jokes, such as this gem: “How many cripples does it take to screw in a light bulb? Thirteen. One to screw in the light bulb, and a dozen piled up to the ceiling” (Mantis Dreams 88). Dexter does something similar to what Barney Panofsky does in Richler’s Barney’s Version: Barney makes Jewish jokes not because he is anti-Semitic, but because he enjoys getting a rise out of people. Richler knew that making those remarks would expose the anti-Semites in Quebec; it was, among other things, a baiting mechanism. It was also his way of drawing attention to stereotypes and hateful attitudes toward Jewish people. Richler did not hate Jews; he simply pointed out their hypocrisies. That’s precisely what Dexter tries to do.

"Disability is the problem to be solved, the thing that shakes the normalcy of the characters’ lives, and once the problem’s solved, usually there’s no more disability, and everything returns to normal."

Able-bodied authority runs so deep that it penetrates the way we structure novels—their plotlines, metaphors, motifs. In their seminal book on disability and literature, David T. Mitchell and Sharon L. Snyder explore several texts through the lens of “narrative prosthesis,” a notion suggesting that “disability has been used throughout history as a crutch upon which literary narratives lean for their representational power, disruptive potentiality, and analytical insight” (Narrative Prosthesis 49). Mitchell and Snyder speak of stories written by able-bodied authors; these authors use disability as a plot device, a mechanism on which their novels lean. They rely on disability stereotypes—the tragic Tiny Tim figure, or the inspirational Forrest Gump figure who overcomes his disability—while neglecting to convey a true lived experience of disability. Disability is the problem to be solved, the thing that shakes the normalcy of the characters’ lives, and once the problem’s solved, usually there’s no more disability, and everything returns to normal.

Dexter takes these ideas in the opposite direction. He deliberately refuses treatment for his Charcot-Marie-Tooth disease. Despite the rising arches in his feet and the scoliosis in his spine, he declines surgery and corrective orthotics, electing only for pain medication and massage therapy. In his mind, his disability is breaking him down to his purest self: “The more disabled I become, the clearer I’m able to see the world. The sheen, streamline and harmony fall away and I see the fat, jagged, grimy gristle of the soul” (10-11). Dexter’s condition worsens as the novel progresses. His muscular tremors intensify. His pain increases. He switches from a self-propelled wheelchair to an electric one. My intention was for the reader to scream, “What the fuck is wrong with you! Go to the doctor! Get help!” But Dexter doesn’t. He’s happy the way he is, because the way he is disturbs people, and that’s what he lives for. Things don’t return to normal at the end of the story; Dexter isn’t cured or corrected. His legacy of unsettling abnormalcy carries on. He clashes against the reader’s sense of normalcy, forcing them to question that normalcy.

"For disabled writers such as myself, satire is the ideal intellectual weapon. It ridicules the supposed authority of ableism as well as the insecurity of those who cling to preconceived notions of normalcy, all while asserting that disability is a viable identity."

Disabled people are often perceived as existing at the bottom of the social hierarchy. The value of our lives is consistently questioned, thanks to advances in genetics that seek to eliminate disabling conditions, along with assisted suicide legislation. We’re seldom represented in cultural, political, and social spheres, and when we are, our stories are usually told by able-bodied and able-minded people. Because we’re at the bottom looking up, we look for ways to agitate and even uproot those above; therefore, a disabled perspective offers a uniquely advantageous position for writing satire. For disabled writers such as myself, satire is the ideal intellectual weapon. It ridicules the supposed authority of ableism as well as the insecurity of those who cling to preconceived notions of normalcy, all while asserting that disability is a viable identity.

When I say “disabled perspective,” I don’t just mean from the perspective of a disabled character; I mean from the perspective of a disabled writer. There are several Canadian satirical novels that feature disabled protagonists, such as Barney’s Version and Coady’s Strange Heaven. Richler and Coady, however, don’t identify as disabled authors; as a result, their novels’ satirical drive loses a bit of its momentum. Disabled people are often suspicious of able-bodied writers telling their stories, namely because able-bodied writers tend to resort to stereotypes rather than capturing the lived experience of disability. Those stereotypes make books such as Creeps by David Freeman, A One-Handed Novel by Kim Clark, and When Fenelon Falls by Dorothy Ellen Palmer all the more wicked, for their satirical bite arises from the authors’ own experience of disability.

Mantis Dreams is but one example of several Canadian books that exhibit the circumventive, satirical potential of disability. Disabled authors have created and will continue to create some of the most innovative, challenging, and funny stories in Canadian writing. As he has on so many occasions before, Dexter summarizes my thoughts on this matter better than I can:

I want my ideas to work. I want them to flood some previously untouched rind in

people’s brains with a charged, awakening crackle, as though they’ve been slammed with

gospel. I want canes and crutches to be raised like M16s. I want wheelchair users to roll

like tanks into crowded rooms. I want tongues as loose and jittery as mine to hop around

the earth like fish suddenly turned amphibious, hollering instead of gasping, chanting

instead of croaking. I want the growls and grunts and yips and huffs and shouts and

warbles of all my floppy-mouthed comrades to be taken as calls to arms, as wondrous

philosophy, as the voices of our times. I want disability…to be known as the ideal

condition of the twenty-first century. (200)

A One-Handed Novel by Kim Clark

Fall On Your Knees by Ann-Marie MacDonald

Narrative Prosthesis: Disability and the Dependencies of Discourse by David T. Mitchell and

Not Wanted on the Voyage by Timothy Findley

Adam Pottle’s writing focuses on the dynamic and philosophical aspects of Deafness and disability. His first book, a poetry volume called Beautiful Mutants (Caitlin Press), was released in 2011 and shortlisted for two Saskatchewan Book Awards and the Acorn-Plantos Prize. His 2013 novel Mantis Dreams: The Journal of Dr. Dexter Ripleywon the 2014 Saskatoon Book Award. His play Ultrasound was staged at Theatre Passe Muraille in Toronto in 2016, and his novella The Bus won the 2016 Ken Klonsky Award and was recently published by Quattro Books. He has a PhD in English Literature and teaches at the University of Saskatchewan. He lives in Saskatoon.

March 19, 2021
Reflections on disability culture and identity from the contributors of the Disabled Voices Anthology