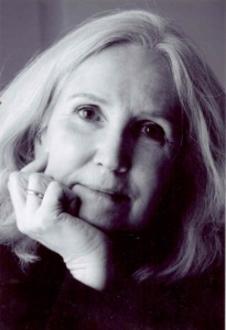 This International Women's Day, we celebrate women's voices by trying to find ones lost throughout history with Lorri Neilsen Glenn, poet, essayist, educator, and researcher. Her latest book Following the River: Traces of Red River Women (Wolsak & Wynn) attempts to unearth women's stories – specifically Indigenous women's stories – and in the following essay, she talks about that process of sieving women's truth from the glut of male- and white settler-dominated narratives.

Woman:  I keyed the word into the search bar. No luck.

Nope. How about a Cree word for woman, iskwew?

I winced as I keyed in a too-common racial slur. Still nothing.

I was thankful, at least, to be able to search the two-hundred-year-old texts electronically. After more than a year in libraries poring over yellowed books with disintegrating spines, I had turned to online sources.

Odd the species has survived, I muttered, given no woman walked this land in the late 1700s, Indigenous or European. Later, moving into 19th century works, I began to find mentions and story fragments about the half of the population history has largely ignored.

At one point I happened on an anecdote written by explorer William Keating, and it took my breath away. What seemed like an ordinary description of a woman alone on the river was piercing, and it trailed me as I continued to search the past. The unnamed woman would become a touchstone, a teacher.

Following the River: Traces of Red River Women began with research into my great-grandmother’s death on a steamboat at the north end of Lake Winnipeg. Once immersed in Catherine Kennedy Couture’s story, I needed to learn more about her contemporaries and their lives. Before long, I was several generations back to 1758 York Factory and Severn House, having found written traces of an Ininiwak (Swampy Cree) grandmother, Ke-Che-cho-wick, one of the Homeguard Cree who supplied provisions for fur trading posts.  In printed documents, these remarkable women, critical to fur traders’ survival, were described according to their utility — as pack animals, sleeping dictionaries, and objects for sexual release. Often, they were given a generic name such as “Aggathas.” Governor George Simpson referred to his many country wives as “bits of brown” or “the commodity.” These women, however, were extraordinarily skilled and resilient beyond what anyone should have to be.

The stories I gathered were written by fur traders, explorers, Hudson Bay Company men, clergy, and journalists — not by the women themselves. Indigenous women rarely had the power of the pen. Whatever I could find was in fragments, pieces so elusive they reminded me of scorched leaves of paper floating above a fire that disintegrate with a touch. As all stories are, each was filtered through the political lenses of the times.

Raised in a settler colonial society, I am, like so many, familiar with the erasure of women from written history. Erasure starts, of course, by not acknowledging a group in the first place. As I combed through documents for stories about Indigenous women, I began to see some of the many ways they were — and continue to be — erased.

1. The most egregious and abhorrent means of erasure is, of course, is to kill people, individually or as a group. Today, finding and reporting accurate numbers of missing and murdered Indigenous women and girls is almost impossible — too many lives have been lost. If it’s difficult today, I thought, imagine the countless murdered and missing in the last 500 years.

2. When the name of a woman (of any background) appears in historical documents, the woman herself is often hidden behind her role as someone’s wife, sister, or mother, a legacy of patriarchy we are all familiar with. Grey Nuns Annie Goulet and Sara Riel made significant contributions to Red River life, yet it is their association with their brothers that has received the most attention. Yet, if it weren’t for the fact two of my Métis ancestors, Reverend Henry Budd and Peter Erasmus, Junior, were relatively well known, I would never have learned about Sally Erasmus, Catherine’s mother, or Kitty Budd, Sally’s mother.

3. Over the 250 or so years spanning my search, I learned that when Indigenous women have a presence, a voice, or a modicum of agency, they are too often silenced, dismissed, ignored, defamed, or trivialized. Young missionary Sophia Mason died translating the Bible into Cree but when the edition was published, her name did not appear. Maria Thomas, 14-year-old servant girl of Reverend Griffith Corbett, was forced to meet Corbett’s sexual demands repeatedly; when Maria’s parents took Corbett to court for trying to trigger abortion with a wire on the end of his finger, Maria was labeled a vindictive girl of easy virtue and her testimony given no credibility. The fact that Sarah Ballenden married the Chief Factor at Fort Garry and became the highest-ranking Métis in Red River at one point was such an affront to the local British “bluebloods” they resolved to bring her down, and did. Influential Métis women, such Annie McDermot Bannatyne, however, resisted: after she read Canadian poet Charles Mair’s disparaging comments about “half breed” women in a national newspaper; Annie marched into the store he frequented carrying a whip to settle the score.

4. Belief systems love binaries, and still do. In European texts of the 18th and 19th centuries, writers commonly indulged in either/or descriptions, and Indigenous people were often reduced to stereotypes. The men were noble savages and the women virginal damsels, worthy subjects of paintings, songs, and poetry, including the verses of Duncan Campbell Scott, architect of the residential schools. In the rush of expansion — and the thrill of acquiring land! Resources! Riches! — settler accounts of the “primitives” and “pagans” of Rupertsland were romanticized and idealized, except when they weren’t. The texts I combed often referred to Indigenous people’s brutish, venal, crafty, and violent behaviour. Women, in particular, were reduced to fickle whores, gossipers, heathen and wanton baby-makers, and unfit mothers. As I read, I longed for characterizations that were complex, rich, and challenging, the kind Indigenous women themselves write today.

The means to ignore and erase Indigenous women’s lives are innumerable. I am struck in particular by stories of uncelebrated women who resisted —  who fought off a bear with an axe while hapless fur traders in the camp looked on, who tended to the sick, educated their children, stood up to anti-Riel forces, created businesses, and established community bonds. I was fortunate to find these stories and more in newspapers and archival material and include them in Following the River. The stories are others’ accounts, but they provide glimpses. Yet I think of the ones never recorded — a wealth of stories that would enrich readers’ understanding today.

To begin to create awareness of the challenges Indigenous women face in what is currently Canada, we need only to look at the many ways their lives were disregarded centuries ago. I return often to the woman on the river, the subject of William Keating’s description.

She was a half-breed, whose insanity was supposed to have sprung from a religious melancholy. Being one of those whom the missionaries had converted, she had become very pious, but her intellect was too frail for the doctrines which had been taught to her; in endeavoring to become familiar with them, she had been gradually affected with a malady, which at that time seemed incurable.

When I bracket the fact that Keating’s analysis is romantic, dismissive, and condescending, I try to see the grit and the flesh of this woman’s life. I want to imagine her corporeal presence, what Bronwen Wallace would have called her “stubborn particulars,” the dawn-to-night sensory quotidian details of her days. I wonder if she had children whose descendants may be alive today.

She teaches me, this much I know. A woman caught in a liminal place — between open water and land, between the beliefs she was born into and those forced upon her. I see her suffering from an incurable malady, perhaps, but its cause runs deeper and wider than religious doctrine alone. She has been caught up in the post-contact pandemic that continues to afflict the so-called ‘new’ world: the toxic and pervasive scourge we know as colonialism.

About Lorri Neilsen Glenn: Lorri Neilsen Glenn is a poet, essayist, teacher and researcher. Her most recent books include the bestselling  Untying the Apron: Daughters Remember Mothers of the 1950s, an anthology of prose and poetry, and an acclaimed book of lyric essays in bricolage form, Threading Light: Explorations in Loss and Poetry. The former poet laureate of Halifax, she has won awards for her writing, her innovative teaching, her research and her work in the arts. She is a professor at Mount Saint Vincent University and a mentor in the University of King's College MFA program in creative nonfiction. She lives with her family in Nova Scotia.

In Review: The Week of December 9th