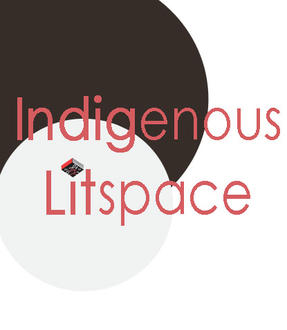 Over the last four years, we've been lucky enough to feature books and words by Indigenous authors on All Lit Up for you to discover. And with our ever-growing list, we had an a-ha moment: why not launch a showcase page highlighting all this essential, exciting writing? That's where Indigenous Litspace picks up! Featuring colourful artwork from four Indigenous visual artists from various regions in Canada, the micro-site includes blog posts, books, authors, videos, awards news, and more for you to browse, discover, and read all in one place. For now, why not get to know the artists behind the stunning artwork on Indigenous Litspace? 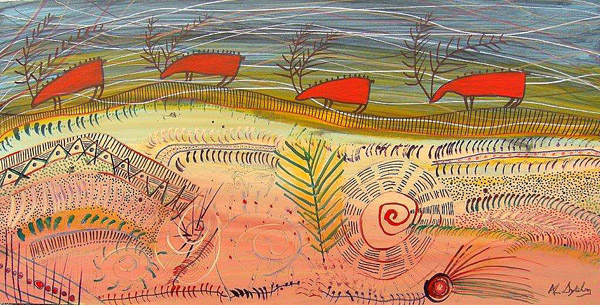 "I see making art as a way of organizing chaos. Sometimes within the chaos of making a painting, a symbol in the shape of a moose or a caribou will walk through my consciousness in a form that resembles an ancient petroglyph. My work is inspired by the ancient petroglyphs which were carved in stone by my ancestors on walls in caves. This was their way to capture and respect the spirit of the subject. When I paint these images, I feel I am channeling a way to bring their spirits back into our consciousness.  At one time, these drawings were predominant and lived within our culture. Today, most are no longer visible in their original environments, but I believe the earth has a memory of the spirits they contained. My work lives in the moment but is profoundly influenced by the past; this gives me my bearings as an artist, and as a human being. My ancestors have provided me with a spiritual global navigation system, and I like to believe that what I do helps to keep the spirits evolving."

"The caribou design [in the featured images] is taken from the Petroglyphs at Kejimkujik National Park. Caribou disappeared over 100 years ago. Some of the last ones were reported killed very close to where I live. With this piece I hope to evoke the memory of Caribou and the important role that they had in the Mi’kmaw culture."

"This artwork was created with a simple, but powerful message: reading can send you off to another world."

Dawn is a self taught First Nations Artist, born in Yellowknife, Northwest Territories. She is a direct descendant of Chief Snuff of the Yellow Knifes, one of the signers of the original Treaty 8 with the Government of Canada. From commissions by the Coca Cola Company to the Canadian North airlines, Dawn's art has appeared on the grounds of the Vancouver Winter Olympics to the body and tail finds of commercial planes. Her work has been used by the Royal Canadian Mint, Unicef, the Vatican, and plenty more. Dawn was also chosen as the first female Canadian Native Artist to design the poster for the International Standards Organization.

"Reading is a way to escape, imagine, dream, and heal, through words that often become apart of you. When I read, the words manifest into images and allow me to take liberty in their interpretation. I cannot help being fully involved with whatever book I am reading, and that is the most wonderful feeling. To feel lost in a world someone else has created. This image mirrors that feeling of enchantment and intrigue that reading often evokes for me."

Kaya Joan is a multi-disciplinary mixed Afro-Indigenous artist living in T’karonto (Dish with One Spoon treaty territory). Creating is as essential as breathing, and she draws inspiration from absolutely everything. Her work focuses on healing, transcending ancestral knowledge and creating dreamscapes inspired by the land of her ancestors (Turtle Island and the Caribbean). Kaya is in the process of completing a BFA through the Indigenous Visual Culture program at OCAD.

Lauren Crazybull is an Edmonton-based Blackfoot, Dene visual artist whose deeply sensitive rendering of visual language testifies to the empathy, emotional intelligence and passion of the artist herself. Lauren's work is informed, in part, by several years of justice organizing, Indigenous advocacy and tireless work as an artistic facilitator and mentor for youth throughout her home province of Alberta. As such, Lauren's visual repertoire — whether expressed through portraiture, line drawings or comics — consistently seeks to create pathways of vulnerability, understanding, connection and emotional rigour between herself and the viewer.

In the coming months and years, Lauren Crazybull is devoted to continuing her path as an independent artist and youth worker who hopes to use her spectrum of skills and experiences to empower Blackfoot and other Indigenous young people through art. Lauren is a person who believes that the world needs more art-making of all kinds. She is an artist who uses her own creative potential to create honest personal expressions that reflect a deep humanity, and a genuine willingness to connect empathetically with the viewers of her art. Furthermore, she understands that her creative power is a poignant way to assert her own humanity, and advocate, in diverse and subtle ways, for the innate intellectual, spiritual, creative and political fortitude of Indigenous people.

Thanks so much to all of the artists for their beautiful work on the Indigenous Litspace! Stay tuned in the coming months for when we reveal our litspace guest editors, who will contribute essays and choose their fave reads for the page.