From the Archive: Titles Gone Rogue with The Iconoclast's Journal and Biblioasis' ReSet Series

Award-winning author Terry Griggs and the team from Biblioasis ask in today's From the Archive, "what's in a name?" In the case of Griggs' The Iconoclast's Journal, it can result in some serious mis-shelving: the former title, Rogues' Wedding, had wound up in the romance section more than once. They talk about saving the book in its gorgeous new Biblioasis ReSet edition (as well as what ReSet is), below.

A Note from Biblioasis:

Biblioasis is delighted to bring Terry Griggs’  The Iconoclast’s Journal back into print via ReSet Editions, a series that gathers together overlooked Canadian classics in attractive new volumes. The Iconoclast’s Journal follows the madcap adventures of Griffith Smolders, who, when his wedding-night preparations are interrupted by a close encounter with a ball of lightning, jumps from his hotel window and flees across the Victorian Ontario countryside—with Avice, his bride in hot pursuit. Initially published as Rogues’ Wedding by Random House Canada in 2002, we’re excited to put The Iconoclast’s Journal into the hands of its readers. Here Terry Griggs talks about the experience of publishing—and republishing—a novel. 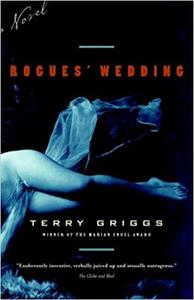 In the stories we tell ourselves about ourselves we can edit with wild abandon if we so wish, but it’s a rare opportunity to tinker with something that, while it originated with us, we’ve set free to roam the world on its own. Like a book! Or, more specifically in this case, the title of a book. Text can change somewhat with re-publication—a correction here, a tightening there—and titles can differ from country to country, but the name you christen the damn thing with tends to adhere to the cover as if applied with crazy glue.  If a little crazy yourself in the lead-up to publication, you might, like a besotted parent, only realize later that your darling may not be nominally well-defended against misinterpretation. Not that I’ve encountered any literary bullies, but my novel, Rogues’ Wedding, which has been defined as an anti-romance, did occasionally find itself shelved with the romantic fiction. Even when not, it’s hard to picture any male, no matter how literary himself, having reached for it without wincing. Or reaching at all.

This story does have a romantic angle, however, because a knight-in-shining-armour, the valiant Dan Wells of Biblioasis, appeared on the horizon one day with an offer to re-publish the novel, and hey, no problem with changing the title back to its manuscript moniker: The Iconoclast’s Journal. I did rue the loss of that title, but the publisher didn’t like it and a list of alternatives — all perfectly wrong — were drawn up. The "rogue" of the selected title fit well enough, especially if one thinks of the word’s etymology, which has to do with wandering and vagrancy, rather than what your standard rogue of love-lit might get up to when encountering a heaving bosom. (My character, Grif, would run away.) And weddings can be entertainingly comic — lots of potential for disaster and an endlessly rich source of human folly. So Rogues’ Wedding won out . . . yet didn’t seem right. Not only was that apostrophe a trouble-maker, drifting into the singular in reviews, but my spurned title continued to lurk in the margins like an aggrieved ex. Turns out it was the real rogue.

But why, beyond my own mini-obsession, go to the trouble of reclaiming it and possibly annoying a reader who may have purchased the original book and now finds themselves stuck with the very same one? Oh, well, because it’s my party . . . but mainly because iconoclasm is central to it. Faith-breaking on many levels, personal, spiritual, societal. The title also refers to an actual journal kept by a "professional" iconoclast, which, refashioned by your thieving author, becomes a significant touchstone for each of my reprobate characters.

And why republish the book at all? Other than being set in a turbulent time not unlike our own, giving it a kind of spooky relevance, I have to say that I lucked-out. Those sands of time do drift with astonishing dispatch over most books. I could barely remember the novel myself, until Dan, now donning an Indiana Jones hat, plucked it out of the biblio-desert, dusted if off, and placed it in his ReSet series, a trove of valued and enduring literary works.

Our great thanks to Terry Griggs for letting us in on her party (we laughed and laughed at "because it's my party") and to Vanessa and the Biblioasis team for sharing their ReSet series, something after our own From the Archive hearts. The Iconoclast's Journal is available June 12 – request a release reminder from us!

February 13, 2019
Short Story Month: Outside People and Other Stories by Mariam Pirbhai