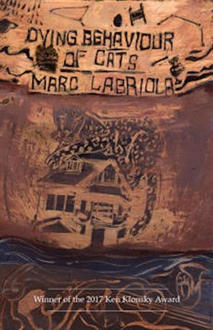 Winner of the 2017 Ken Klonsky Novella Award, Marc Labriola's debut  Dying Behaviour of Cats (Quattro Books) opens on a reclusive man – Theo Galli – about to end his life, when a hurricane hits. After finding himself with a furry (and potentially bitey) roofmate – AKA a stranded leopard who escaped from the zoo – Theo is forced to reckon with the losses in his life as his heretofore quiet existence is forced into the public eye. 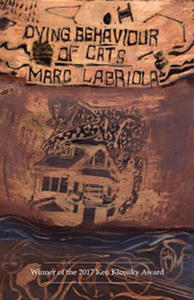 Who: Marc Labriola writes fiction and poetry. His stories have appeared in literary journals throughout the US. He has been nominated for literary awards including the Pushcart Prize and Best American Short Stories. He lives in Toronto. Dying Behaviour of Cats is his first book.

Theo Galli is agoraphobic and has spent the last seven years as a recluse in his father’s home. One evening as he attempts to drown himself in his bathtub, he is interrupted by an inpouring of street water. Hurricane Catalina has hit and the streets are devastated. Due to the disaster, animals have escaped the zoo, including a leopard who has decided to make his home on the roof of Theo’s house. Media begin to swarm and soon their focus turns not only to the leopard but to the man inside the house who refuses to come outside.

As the novel progresses, the reader learns more about Theo’s past including his struggle with his deceased musician father who suffered dementia. We also gain insight into the love of his life, his separated wife, and why Theo may have chosen to become a recluse in the first place. Told in poetic and often dark prose, this novella confronts illness both mental and physical, regret, and lost love. Compelling, gritty, and punctuated with humour, you are sure to finish this one in one sitting.

In Dying Behaviour of Cats, the central character, Theo, takes pleasure in despair like the Underground Man in Fyodor Dostoevsky's Notes from Underground, has the love-madness of Florentino Ariza in Gabriel Garcia Marquez's Love in the Time of Cholera, and is as misanthropic as Henry Chinaski from Charles Bukowski's Post Office.

Thanks to Alex at Quattro Books for sharing Dying Behaviour of Cats with us. For more First Fiction Friday, click here.