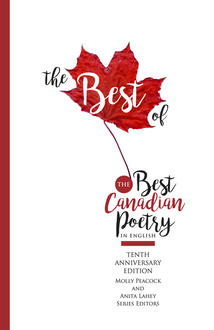 After 19 healing days of the #ALUpoetrycure, we sure could eat. Tightrope Books' Best Canadian Poetry series editor Anita Lahey joins us to make a perfectly balanced poetry stew; detailing the common and contrasting themes in the poems that make up the series' 10th Anniversary Edition, Best of the Best Canadian Poetry.

A poetry anthology can be an inviting buffet. We dip in when we’re peckish for a little metaphor or wordplay, a satisfying literary bite. We can pile disparate voices or forms on our plates, knowing one poem needn’t dominate the meal. This is often our relationship, as readers, with anthologies: we approach them as enticing arrays of tasters.

As an editor, though, I see anthologies as soups or stews, the kind of meal that tastes better after slow-cooking. And among anthologies, Best Canadian Poetry in English (BCP) is perhaps the most unpredictable dish going. As a guest editor’s selection of the best 50 poems published in journals the previous year — zero thematic cohesion required — the annual BCP is a taste-bud-bending concoction made lovingly from a vast countertop of available ingredients, each selected on its own merits, without prior knowledge of how they might behave when combined.

Yet blend they do. Connections sizzle between poems, and a kind of literary fusion takes place. Key flavours are heightened, hidden ones revealed. Unexpected hints of sweet and sour emerge.

Parents could be considered the dish’s root vegetables, a staple. In BCP’s 10th anniversary edition, Best of the Best Canadian Poetry, published in 2017, we meet several fathers. I’d say Anne Carson’s late father, his cardigan over the back of the kitchen chair, is a firm-boiled russet. The late father of Lorna Crozier, meanwhile, who eyes her through the gaze of her neighbour’s cockatoo, is an unscrubbed baking potato, wonky with sprouts. Sue Goyette’s “On Losing Their Father,” in which the narrator warily tracks her children’s grief, adds bitter turnips to the pot, though the poem’s tone of loving observance softens the taste, subtly, like a few sliced parsnips.

But fathers can’t be so easily grouped into a single type of ingredient. The one besotted with his son in Carmine Starnino’s “Courtship” adds biscuit crumbs and a fruit gum aroma. Shane Neilson’s “My Daughter Imitates A.Y. Jackson’s ‘Road to Baie St. Paul’” adds the salt of a father’s uncertainty, worry and love. This is no mere dash or pinch; it’s “the salt cracking down the mountainside.”

I don’t want to take this stew metaphor too far. But let’s go just a little further. What happens to our root-vegetable dish when you toss in Glen Downie’s “Nocturnal Visitors” and Sadiqa de Meijer’s “Exhibit”? These are both fiercely passionate odes to undervalued treasures. For Downie, this is the much-reviled raccoon (peppercorns, perhaps?). For de Meijer, it’s the beloved item of clothing relegated to the “ethnic” or costume section in thrift stores. Her homemade salwar kameez is the creamy element in our sauce.

In Khâsha’s “Bush Indian,” a girl sits barefoot on the steps: “It wasn’t earthy, but poor and easy.” On the facing page, the narrator in Sonnet L’Abbé’s “The Trees Have Loved Us All Along” has a charged encounter with a tree trunk driving “up out of a paved patch in the concrete.” She isn’t earthy either. These two poems have starkly different themes, but they share a defiant awareness, a way of encountering the world that is unmistakably—and consciously—outside presumptive norms. They bring to the meal the memory and texture of the gritty soil from which our vegetables were pulled.

Now take Khâsha’s sat-upon steps, L’Abbé’s paved patch of concrete and stir in the parking lot slinking into marshland in Laurie D. Graham’s “Say Here, Here.” Recall the “the tulips of coffee cups, / bluebells of cigarette butts” in the parking lot flower boxes outside Goyette’s funeral parlour. Contrast the staccato reportage of that poem—its inhabitants’ abiding state of shock—with Graham’s hammering litany, her relentless chant-chant-chanting against the ways we close our eyes to our collective history. Here is our fiery hot sauce. Our eye-burning onion.

I could select different combinations of the anthology’s poems and keep modifying our simmering stew. To what extent does the owl in M. Travis Lane’s “Bird Count,” with its “antenna of the frost,” add a bit of zing to my sense of Evelyn Lau’s “Grandmother” with her “lips crimped” and “eyes downcast”? To what extent does the reinvention of self in Amanda Jernigan’s “Io” contrast the seeking and self-recrimination in Sally Ito’s “Idle”? Between the two, in my own reading, lies Michael Johnson’s “The Church of Steel” and also Maureen Hynes’ “Last Cigarette.” All call upon ritual, solemnity, mythology, decisive moments, turns, meaningful acts. These provide the protein: the kidney beans, the bacon, the beef.

All of these poems had different company in the earlier editions of BCP for which they were chosen. But now, they’ve come together in their rallying, and have created these unlikely associations in my mind, between, say, raccoons and salwar kameez, or owls and grandmothers. They’ve brought me this slightly different understanding of the ode and its possible flavours. They meld into a new kind of ragout, a recipe never dreamed by the likes of Julia Child or Jamie Oliver.

Our many thanks to Anita Lahey for writing this piece about poetry anthologies and sharing the poets and poems of  The Best of the Best Canadian Poetry in English, as well as to Heather at Tightrope Books for connecting us.