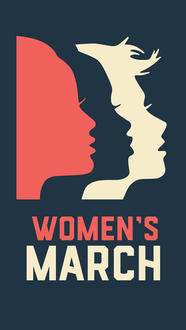 With this being the day after International Women’s Day, we look back to what seemed like the first bright light after a bunch of bad news: the Women’s March on Washington. As Quill & Quire reported, women writers and publishing industry professionals were involved on March planning committees all across Canada. Today, two such women share their experiences: Bianca Spence and Elisabeth de Mariaffi.

The events of the Toronto’s Women’s March are known to many: an estimated 60,000 people attended the rally at Queen’s Park where the main speakers were racialized women, including TDSB trustee Ausma Malik and Idle No More’s Crystal Sinclair. The march itself spread to all six lanes of University Avenue. There were four accessibility buses, two ASL interpreters, 10,000 buttons, and one Call to Action for gender equity in the Toronto budget led by Councillor Kristyn Wong-Tam in Nathan Phillips Square.

What you may not know is how it was put together. Initially, two separate teams of women had applied for permits at Queen’s Park. The permits administrator suggested our groups get in touch and, agreeing we would be stronger together, we joined forces. Ten women, many of us strangers, came together in the spirit of unity, cooperation and inclusiveness. We brought our differences to the table: women who’d been part of activist movements for decades, women who’d attended a march or two but had never organized one, and women who’d never done anything like this before. We were self-defense instructors, teachers, writers, communications managers, public servants, and students.

The Women’s March on Washington was a direct response to Donald Trump’s misogynistic views and the sexist rhetoric that permeated his campaign, but it was important for the women in our group to connect what was happening in the US to struggles happening here in Toronto. The lived experiences of colonialism, anti-black racism, xenophobia, homophobia, transphobia, sexism, ableism and other forms of oppression existed long before Donald Trump, and we worried that the US election provided a platform to normalize hate and make it acceptable. Because the strength of our identities and experience is essential to creating vibrant, diverse and strong communities, our message included broader social and human rights issues including race, gender, religion, sexuality, immigration and healthcare. We weren’t simply rallying against Trump; we were rallying for equity, inclusion and an end to oppression.

"It is a plurality of experiences that helped us accomplish so much on January 21st." –Bianca Spence

There are lots of moving pieces when putting together an event this large, and things weren’t always convenient or orderly. That we were volunteers with an extremely short timeline added to the challenge.  We made mistakes that we’re still learning from. We could have done much better, for example, in the area of accessibility. We learned it’s important that accessibility planning happens at the very beginning of the process and is clearly communicated as soon as possible. It is not just about inclusiveness, but also dignity and the ability to make an informed decision about attending an event. We’re working directly with people with disabilities to make improvements for future events, and we’re happy to have their voices at the table, following to the first principle of inclusion: “Nothing about us, without us.”

It is a plurality of experiences that helped us accomplish so much on January 21st. Members of our committee have been involved with activism since the Days of Action in the 1990s. They knew how to arrange for insurance, liaise with police, and engage with city councillors. Their labour and social justice networks are extensive. Younger women provided expertise in graphic design, social media and communications. This cross-generational skills exchange is helping the women’s movement strengthen and grow.

There are costs associated with an event like this: banners, buttons, megaphones, ASL interpreters, bus drivers, sound systems. Here. we benefitted from the kindness of strangers. We re-opened our GoFundMe page when the number of attendees kept increasing. We’d need a more powerful sound system. People donated generously. Our volunteers were amazing, creating signs, distributing swag, marshalling attendees, and leading chants. Every bit helps. Even if you think you can’t do very much, it all adds up.

The day of the march exceeded all our expectations. Based on the Facebook numbers, we had estimated about 10,000 to 15,000 people. We stood on stage at Queen’s Park and watched in amazement as people kept arriving. We only had 10,000 buttons. It wasn’t going to be enough.

And now that we’ve marched, there is still work to do. To find out what we’re doing now, or how we’re supporting other groups, please visit Women March On: Toronto. 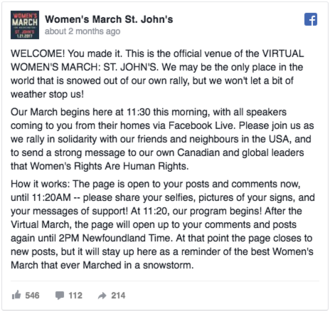 In St. John’s we hit the ground running with the idea of some kind of rally within days of the US election — one of my co-organizers posted on Facebook about getting something together, another one messaged me privately, and the next thing I knew we were having weekly meetings and doing press. We knew we wanted our focus to be on solidarity with those who were so disappointed and angry in the States, but more than that, we wanted to send a strong message to our federal and local governments that the messaging we’d seen during the Trump campaign has no place in Canada.

I’ve been a part-time feminist activist for most of my life; a few years ago I was a local organizer for the national Day of Action to protest the verdict in the  Cindy Gladue murder trial — so I knew that a national action could be pulled together and I knew that it would have impact. By the time we were into December, I’d connected with other organizers across Canada (and pulled some of my friends in other cities along with me for good measure) and Women’s March Canada was well on its way.

"We knew we wanted our focus to be on solidarity with those who were so disappointed and angry in the States, but more than that, we wanted to send a strong message to our federal and local governments that the messaging we’d seen during the Trump campaign has no place in Canada." –Elisabeth de Mariaffi

As the day of the March neared, weather reports in St. John’s began to take a decidedly terrible turn — with 48 hours to go pre-March, my team made the decision that if the blizzard were as bad as predicted, we would be unable to go ahead as planned. We may be the only Women’s March in the world that got snowed out. Instead, in St. John’s the March  went Live through our Facebook page — attracting some 13,000 participants in real time, from all over Newfoundland, across Canada, and around the world. After a short break, Canadian organizers are working now to find the right way to move forward as a group, to provide Canadian women with a national voice and resource under the Women’s March umbrella. I’m pleased to be part of that working group.

Thanks so much to Bianca Spence and Elisabeth de Mariaffi for sharing their stories with us, and Leigh Nash from Invisible Publishing for making the connection with Elisabeth.