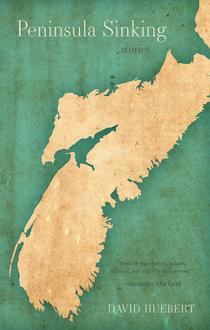 CBC Short Story Prize-winner David Huebert brings us a collection of short fiction in  Peninsula Sinking (Biblioasis)—including his award-winning "Enigma"—that tell stories of Maritimers, of wounded wanderers, prison guards, submariners, and veterinarians seemingly trapped in shortcomings and situations. Author Laurie D. Graham says of the collection: “Each sentence is alive and crackling. [Huebert's] turns of phrase will catch your breath in your throat. These stories will sweep you up.” Below David shares memories of his childhood in Halifax, the place that informs much of this collection, taking us on a journey to the Peninsula.

The plan was to spend a few months in Calgary, make wild Alberta money, then buy a car and see Vancouver before driving back to Halifax. A coast-to-coast extravaganza leading up to our final year of undergrad. To save on rent we slept in the same bedroom in a Southwest Calgary suburb, the walls a monotony of beige. My friend, R, kept a mound of dirty socks near my bed so he could hurl them at my face when the snores chucked up. We ate spaghetti and Hamburger Helper, drank Folgers and Bush. R worked as a roofer by day and a bus boy at night, scarfing remnants of pricey plates left by 8th Avenue businessmen. I worked as a bar-back at a pseudo-Irish chain restaurant situated in a mammoth parking lot between a Tim Horton’s and a Winners and a Cineplex Odeon. A twenty-minute walk home through tan houses and sprinklered lawns. Rumours of Kelly Hrudey jogging shirtless around Signal Hill. One night, walking home along quiet streets in the suburb’s lower intestine, a car full of teens revved by hurling eggs at me. I pined for something I couldn’t name.

Soon I’d learn that thing was my little nook of the Atlantic Ocean.

In “Adult Beginner 1,” one of the stories in Alexander MacLeod’s Light Lifting, Stace recalls a childhood vacation in Nova Scotia. To get to the water, she has to walk past bits of Styrofoam and discarded fabric softener containers. “The beach,” MacLeod writes, “made Stace think of a city park during a garbage strike.”

I know that beach. I’ve waded through garbage to get to the frigid waters of Lawrencetown and Mahone Bay on 30-degree July days. I remember walking down the Halifax waterfront and looking down into a great green slurry of jellyfish and plastic bags, my Fisher Price lure bobbing next to a puck of chewing tobacco.

The Halifax Harbour has come a long way since my childhood. In 2010, then-mayor Peter Kelly went for a swim at notoriously filthy Black Rock Beach in downtown Halifax, intending to prove that his $54-million renovations to the sewage treatment had paid off.1 And it has. The harbour smells cleaner and fresher now. I’ve lately seen people pulling actual fish off the waterfront dock (a sight that becomes a key moment towards the end of Peninsula Sinking). I love that this pocket of ocean is being cleaned by good-hearted people but I also know the bigger picture: the ocean is sick, the ocean is increasingly filled with plastic,2 the fish are contaminated, the pH levels are far too high,3 the coral is bleaching.

Peninsula Sinking knows and feels all this, but the trick of fiction is not to slap wrists or state obvious dooms. Peninsula Sinking does its best to submerge readers in a heaving cauldron of brine and garbage and life. One of the major arcs of Peninsula Sinking is a sustained narrative submersion in Halifax Harbour and the Atlantic Ocean. In “Enigma,” Heather encounters a pair of humpback whales who haunt and colour her inner world, turn her dreams to liquid. In “Peninsula Sinking,” Gavin follows a phantasticized older woman through a field of dead mines left behind after World War One. In “Sitzpinkler,” Miles points his hydrophone out into sub-Arctic waters and listens for the songs of “quietly bobbing giants.” This is a book of prisons and submarines, sex stallions and coal mines, dogs and snakes and whales. Peninsula Sinking tries to present modern Nova Scotians in all their complexity, always haunted by the whisper of the ocean and the call of nonhuman life. The book loves the Halifax Harbour and the Atlantic ocean and tries to cherish all of it—including the fabric softener containers, the tampon applicators, the lobster traps and long-forgotten buoys and discarded pucks of chew. I want readers to follow Gavin on the book’s final journey—to sink, with him, “weightless in the womb-dark deep.”

In August R bought a fifteen-year-old Honda Accord wagon with almost 300,000 on the odometer and we rode the great concrete tongue of the Coquihala. In North Van we stumbled into a park to sleep below a cedar. Woken by dog walkers, we drove to Kitsilano beach to throw a Frisbee and clutch sun-warmed beers.

“Doesn’t smell the same,” R said, spitting into the Pacific.

I left with a gnarly sunburn, skin peeling through the Okanagan and the prairies and beyond. Sheet rain outside Regina, worsening as we got to Winnipeg. The next day we made Kenora, slept in the car in Marathon, gassed up in Wawa. It wasn’t until Moncton—when we opened the Accord’s windows over the Isthmus of Chignecto, felt the great salt stir of the Atlantic roar our nostrils—that I knew what I’d been yearning for.

Missing the Atlantic ocean—pining for the sound and smell of it, longing for its great pulsing shadow—has made me a different writer of the ocean than I would have been if I’d stayed beside it. Though I’ve lived the majority of my life in Halifax, I’ve spent many of my formative years as a writer longing for the ocean. And that longing seems, in a way, perfect. For what is the ocean but an unreachable horizon—a siren song pealing over melancholy grey.

Thanks to Dave Huebert for sharing this story with us, and to Jon Flieger for making the connection!

January 21, 2020
Where in Canada: The Terra Incognita of Alberta

February 23, 2015
A Convergence of Solitudes: Toronto in The Many Revenges of Kip Flynn and Calgary in Monoceros