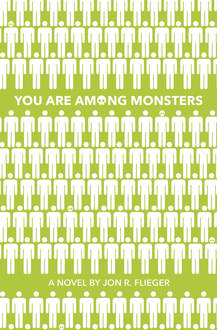 Today's story-behind-a-story is Hallowe'en perfect: author Jon R. Flieger shares the inspiration behind the funeral services workers who staff his latest novel  You Are Among Monsters (Palimpsest Press). After many conversations with a mortician friend fresh to the profession, Jon learned a new, death-friendly lexicon, the at-times graphic steps it takes to prepare a body for viewing, and a nuanced understanding of who gets to tell stories – one that follows right into the book.

See more details below
Tagged: you are among monsters, jon r. flieger, under the cover, palimpsest press

A few years ago, I was working on the start of a new fiction project and my best friend was working on dead bodies. My friend — let’s call him Mark — had completed his mortician’s training around the same time as I had completed a residency at the Banff Centre. He had just been hired on at a funeral parlour in the prairies and I was going back to school again, so before we both got too entrenched in our new lives, we decided to meet up in Saskatoon to swap stories. Mine about boozy poetry readings; his about transferring human remains out of grisly accident sites.

My friend and I have had very different lives, is the thing.

Mark is a natural storyteller, but he has little to no interest in writing. When I suggested he keep a journal about everything he was seeing on the new job he called me a nerd. So, instead, we would talk. On the phone, on Skype, over voice chat while playing an online video game together, and now face to face. By sharing his now very different life with me — and, I suspect, as a bit of talking therapy: a way to exorcise some of the horrors he saw by talking them out — Mark was serving as the genesis for a book whether he cared about writing or not.  You are Among Monsters was born of the idea that people like Mark need to tell their stories, that the dead who Mark was collecting should have told their stories, too, and that sometimes stories are controlled simply by the people left behind to tell them.

The thing that struck me most forcefully, beyond the expected gruesomeness of his stories, was how euphemistic Mark’s new world was. He never said “bodies” or “corpses” or “charred baby” (very different lives). Instead, Mark referred to remains as “transfers.” Mourners were “bereaved,” urns were “receptacles,” and bodies being filled with embalming fluids and having their mouths sewn shut were “in our care.”

Transfer was a particularly useful word for him. He would go on transfers to transfer a transfer. The transfer was the act, the physical movement itself, and the object. I wrote the word “transfer” down over and over. Underlined it.  Put question marks behind it. There was so much emotional transference going on, so much meaning euphemistically transferred and put into place by the rituals of the death industry. After explaining the language and the rules of the place, Mark took me to the funeral home. Showed me the death and the smells and the uncanny wrongness of a healthy-looking but very dead person. They did not look dead (they do very good work at his parlour), but you could tell they were not sleeping. There was something gone. They had transferred.

The thing that struck me most forcefully...was how euphemistic Mark’s new world was...Mark referred to remains as “transfers.” Mourners were “bereaved,” urns were “receptacles,” and bodies being filled with embalming fluids and having their mouths sewn shut were “in our care.”

I went with Mark to see other, less pristine “transfers.” I saw remains before they are prepared for the public to see them. I remembered every zombie movie I had ever seen and expected them to sit up. But then I read the little sheet that had their name and their birthday on it and remembered they were a person very recently. I got drunk and cried a little. I came home and wrote a piece called “Transfer” which would eventually become the first section of You are Among Monsters.

“Transfer” deals with a transfer agent who does not have anyone to confide in and talk out his stories with. Due to a complicated and spite-laced home life where he and his failed academic partner find new and innovative ways to fill every gesture and silence with nuances of blaming each other for the various disappointing turns their lives have taken, my character has no one but the transfers themselves to talk to. Because small, family-owned funeral homes are constantly understaffed, transfer agents like Mark or my character are often forced to find ways to remove transfers by themselves, to load them without assistance into their black vans and drive back to the funeral parlours alone. Alone with what used to be a person, and then do the funeral prep on their own (everything from draining the viscera to applying eye-shadow). With all this time spent alone with no one but the dead to talk to, my character begins telling them his stories and imaging what theirs might be.

Storytelling, and who gets to do the telling, is at the core of You are Among Monsters. But unlike my friend Mark, who simply wants to tell stories as a way to cope with the stresses of life and the shock of death, my characters want to profit off of the stories of others in some way. My character steals something when he begins inventing stories for them in an attempt to use those stories to improve his own life. He then feels compelled to lie to those beyond caring about truthfulness, to the transfers themselves, at the same time that his partner begins vandalizing and forging historical records to appropriate histories for her own studies. Neither is acting spitefully, they are simply trying to cope with a perceived lack of future by attempting to reframe the past as something better. But the past had names and stories. Taking them simply because the dead can no longer hold them is something monstrous.

Jon R. Flieger's work has appeared in Canadian Literature, CV2, The Malahat Review. He was the winner of the 2011 Norma Epstein national award for fiction. His book Never Sleep with Anyone from Windsor (Black Moss, 2007) won the Orison award. He resides in Windsor, Ontario.

Thanks so much to Jon for sharing the undertaking behind his novel  You Are Among Monsters (which is available now from Palimpsest Press!). For more Under the Cover, click here. 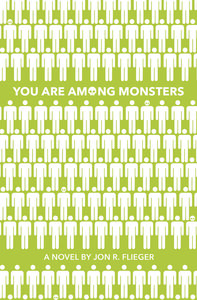 You Are Among Monsters