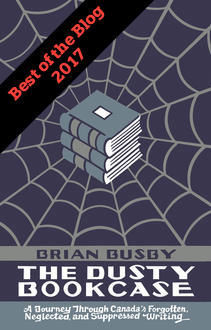 Under the Cover: 10 Dusty Books on Brian Busby's Dusty Bookcase

Author Brian Busby is on a dusty mission: to dig through the used bookstores and eBay listings alike of CanLit's forgotten past, detailed in his book,  The Dusty Bookcase (Biblioasis). Below, Brian shares ten noteworthy finds on his bibliophilic journey, including gossip about the Eaton family, radish-heavy dialogue, and "the worst sex scene in all of Canadian literature."

The Dusty Bookcase – my journey through forgotten, neglected, and suppressed Canadian writing – began with Brian Moore, whose novels I first encountered in university. They were remarkable in their diversity: The Lonely Passion of Judith Hearne, The Luck of Ginger Coffey, I Am Mary Dunne, Catholics, The Great Victorian Collection, and Black Robe. Eighteen years after the man’s death, one could argue that Moore – who won two Governor General’s Awards and was three times shortlisted for the Booker – is in danger of joining the ranks of the forgotten and neglected. Of the supressed… well, Moore never caused the censors to take action, but he did suppress his own work. In the ’fifties, Moore wrote seven pulp thrillers, the earliest of which, Wreath for a Redhead, published by in 1951 by a pre-romance Harlequin, marked his debut as a novelist. He never acknowledged it as such, and came to disown all seven, making certain that they would remain out-of-print. His estate has respected his wishes.

None of this this prevented me from tracking down and reading the books Moore didn’t want read. That first, Wreath for a Redhead, is where my journey began. A casual exploration, without a plan and without a guide, it has spread across time and place. What follows are ten favourite finds:

The last of the three Moore pulps set in Montreal, this thriller was adapted to the screen by Hammer horror writer Jimmy Sangster. Starring Richard Todd and Herbert Lom, it concerns a South American leader who is being treated at the Canadian Neurological Institute (read: Montreal Neurological Institute) after dodging an assassin. Moore was so good at hiding the connections between him, the book and then the film that his two biographers missed it all.

“A Great Canadian Novel,” Toronto Doctor is the strangest work of fiction I’ve ever encountered; À rebours included. There is no Toronto doctor, rather there are several, and they are all gynecologists. Allen, who was a lawyer, had a considerable interest in women’s health, as reflected in the titles of his other novels: They Have Bodies, The Woman’s Doctor, and, as one might expect, The Gynecologist. This novel ends in the first moment of a scene, promising a conclusion in a non-existent sequel titled Toronto Surgeon.

Another gothic novel, this one was written by the woman who was Canada’s first best selling author. Midnight Queen has it all: the Black Plague, the Fire of London, a killer dwarf, a clairvoyant with nothing but a skull for a head, and prostitutes pretending to be members of the aristocracy. All takes place during the course of a single evening. A tour de force!

A son of Kingston, Allen found fame and fortune in Victoria’s London. Dead at fifty-one, he wrote more books than years lived, and fancied himself “the busiest man in England.” This novel revolves around the captivating Maimie Llewellyn, a young woman who leaves a trail of heartache and broken bodies in her wake. Time has come for us all to recognize For Maimie’s Sake as a satire. Its subtitle is A Tale of Love and Dynamite.

Published under a pseudonym, in 1949 News Stand Library paid Ted Allan $400 for Love is a Long Shot. Thirty-five years later, he was awarded the Stephen Leacock Medal for his reworking of that very same novel. Where the original Love is a Long Shot is dark – and features the most disturbing scene in Canadian literature – the reworking is light-hearted romp amongst the criminal class. Of the two, this is the one to read.

Hot Freeze is the greatest example of Canadian noir. Like no other, it captures Montreal as the sin city that lured visitors from Toronto, New York, Boston, and points between. I’ll add that this thriller features the only teenage bisexual I’ve encountered in my reading of post-war Canadian literature.

The fourteenth novel by the prolific Mrs Reynolds, this is the story of a Canadian wife who is abandoned by her Welsh husband. Forget about the plot, dialogue is what makes He Will Return interesting:

"Good evening, Mrs. Owen-Jones. I'm your neighbor, Malcolm Macrae. I thought as I was passing I would just look in and see if you could use a wee bunch of radishes. They grow awfully early on my south slope. You'll maybe no care for radishes?"
"I'm just crazy about radishes. Do come in. Mr. Macrae. It's very kind of you to call and bring us these delicious radishes. Won't you sit down? My husband will be out in a second; he's shaving."

Written by an editor of the London Free Press, The Last Canadian is likely the first Canadian novel I ever read. The plot is set in motion by an airborne virus that kills pretty much everyone in North and South America. Its hero, Eugene Arnprior, survives to have many adventures with lonely, wanton women and murderous Soviet invaders. What fun!

I Lost It All in Montreal
Donna Steinberg
New York: Avon, 1983

Steinberg burst on the scene when I was entering the very same university from which she’d graduated; I Lost It All in Montreal had been her master’s thesis. Envious of her success, and bored by what I heard of the book, I didn’t read the thing until last year. I didn’t expect to be rewarded with the worst sex scene in all of Canadian literature. Mork and Mindy figure.

So many thanks to Brian for digging through his shelves for us (and sending these amazing cover images), and to Jonathan at Biblioasis for making the connection.  The Dusty Bookcase: A Journey Through Canada's Forgotten, Neglected, and Suppressed Writing is available now. 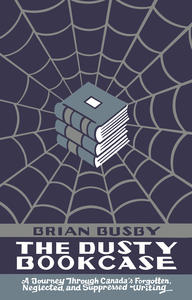 August 15, 2017
Where in Canada: An Enduring Wilderness