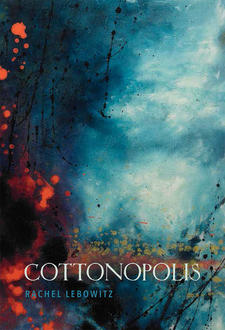 Rachel Lebowitz's  Cottonopolis (Pedlar Press), describes the seedier side of the Industrial Revolution through both found and prose poetry. Moving from the British cotton industry at home to colonization and slavery abroad, the Industrial Revolution's brutality on its oft-forgotten suffering are revealed, from "little lads" who "get littler" and scavengers who "are not birds."

Rachel Lebowitz's  Cottonopolis (Pedlar Press), describes the seedier side of the Industrial Revolution through both found and prose poetry. Moving from the British cotton industry at home to colonization and slavery abroad, the Industrial Revolution's brutality on its oft-forgotten suffering are revealed, from "little lads" who "get littler" and scavengers who "are not birds." 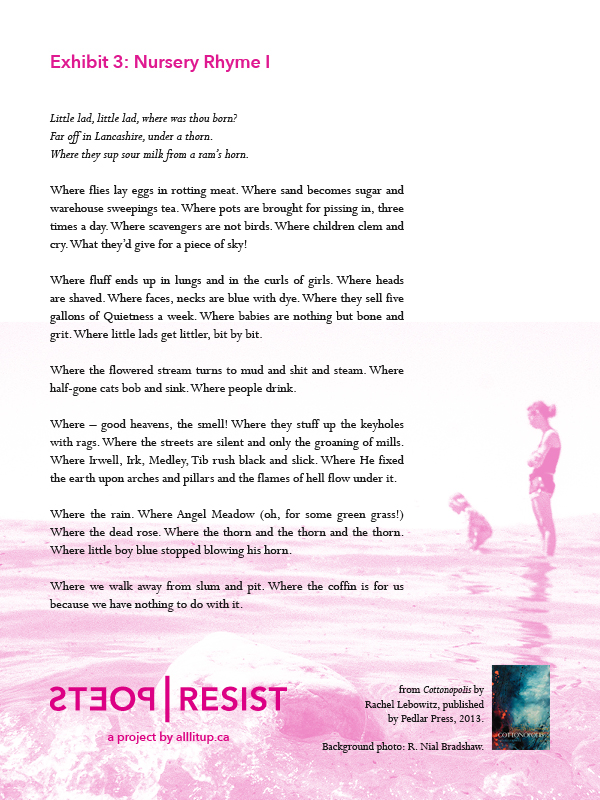 ALU: What are some books that inspired or informed Cottonopolis?

RL: So many! Primary sources such as testimony before the 1832 Committee on the Labour of Children in Factories and The Slave Narratives (compiled in the 1930s, from the Work Progress Administration Federal Writers' Project). Descriptions of Manchester in Friedrich Engels' The Condition of the Working Class in England. Humphrey Jennings' excellent anthology Pandaemonium: The Coming of the Machine As Seen by Contemporary Observers has amazing primary sources. From this book, I took quotes from writers Christopher Smart (such as in “Exhibit 3: Nursery Rhyme I”), Thomas Carlyle, geologist Hugh Miller, and more. I used secondary sources like Marcus Rediker's The Slave Ship, E.P. Thompson's The Making of The English Working Class, Dorothy Marshall's Industrial England 1776-1851, Drew Gilpin Faust's This Republic of Suffering Death and the American Civil War. And so on. I was also reading a fair number of nursery rhymes to my son during some of this time and found inspiration there, as well as with Dr. Seuss, Shakespeare, Janet Frame, Jean Rhys and more.

RL: Probably something classic like “My Body, My Choice.” Whatever I held, I'd understand it - which would be one up from my great-grandmother. Ida Hannus (the subject of my first book, Hannus) was a suffragist who came from Finland to B.C. (to be part of the Finnish utopian socialist commune Sointula, on Malcolm Island). Family lore has it that when she first arrived in Vancouver, she knew no English and one of the first things she saw was a bunch of women marching and holding signs – and she took one and held it high, hoping that she believed in what it said.

RL: The same reason I write anything: I can't get the idea out of my head. I am fascinated by social history, and I also am interested in the literature of the 1840s, like Elizabeth Gaskell's Mary Barton and North and South. When I first came across stories about Manchester as the first industrial city, I got really wrapped up in the stories about child labour in the cotton mills. I later realized that I couldn't just write about mill workers without also writing about the slaves that grew the cotton – and this made it a much more expansive book. It's a very political book, but as with all my work, what matters is not just the protests and capital e Events, but also love. And beauty: the way flowers look on the windowsill – even, the focus on flowers. There were so many descriptions in this period of the poor being content with their lot, as exemplified by the care they took by putting daffodils in a jar. So, beauty – beauty matters – but also, we need to see too how that focus on beauty can be used as justification for laissez faire politics.

RL: I'm a big believer that everything is political and writing of all kinds is part of this, whether in enforcing the status quo or in resisting it. I think poetry as resistance can mean resisting the dominant narratives (so work by people of colour, LGBT, women, people with disabilities and/or mental illness or work that focuses on other stories that have been erased). But I also think that resistance can take many forms, like writing about a slow pace, nature, something that is not obsessed with consumer culture. I think that there are a lot of glib, empty poems out there, and resistance can also mean love, showing emotions, going deep, noticing things, and staying with that image for awhile. Resistance can mean writing slowly, taking time. I'm leery of any writing that is empty rhetoric – there are some writers that can write good pieces of agitprop, but it's very hard to pull off. I've read – or heard – poems where I agreed wholeheartedly with the sentiment, but it came off to me as a series of easy buzzwords. Life is complicated, and writing can be complicated too. So poetry as resistance can be all these things. It can be difficult. 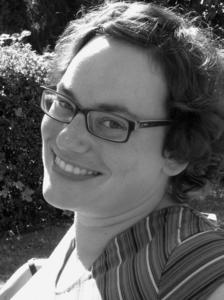 Rachel Lebowitz is the author of Hannus (Pedlar Press, 2006) which was shortlisted for the 2007 Roderick Haig-Brown Regional BC Book Prize and the Edna Staebler Award for Creative Non-Fiction. She is also the co-author, with Zachariah Wells, of the children's picture book  Anything But Hank! (Biblioasis, 2008, illustrated by Eric Orchard). She lives in Halifax.

Buy Cottonopolis or any of our other  featured poetry month collections and get a  Poets Resist pack of a patch and buttons to wear to your next protest. And if you need some more resistance poetry inspiration,  check out our poetry bot!

ALU Note: In an earlier version of this post we'd incorrectly spelled Rachel's last name as "Leibowitz". We regret the error. 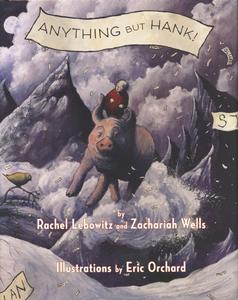