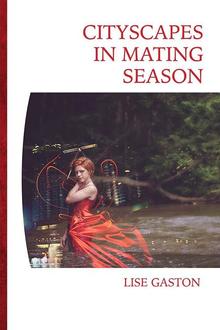 Lise Gaston's Cityscapes in Mating Season (Signature Editions) speaks from a woman's bodily experience of the world, from the reimagining of a ruined castle as a female body participating in her own patriarchal "ruining," to the pervading fear of being alone outside, in the dark. The poems lay insight into the female body, a body struggling with illness and trying to define itself against lovers and doctors.

Lise Gaston's Cityscapes in Mating Season (Signature Editions) speaks from a woman's bodily experience of the world, from the reimagining of a ruined castle as a female body participating in her own patriarchal "ruining," to the pervading fear of being alone outside, in the dark. The poems lay insight into the female body, a body struggling with illness and trying to define itself against lovers and doctors. 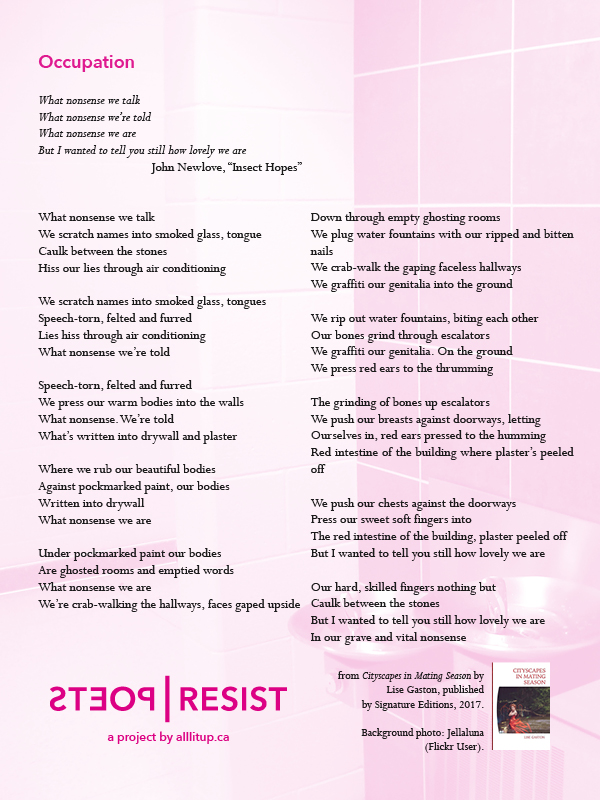 ALU: What are some books that inspired or informed Cityscapes in Mating Season?

LG: The ideas behind this collection began to germinate six years ago: any list is going to be so incomplete. When I think back to the beginning, however, two primary strands of reading stand out. I was interested in how women poets were taking up sonnet sequences and other linked verse forms in new ways: Susan Gillis’s Volta, Ann Carson’s The Beauty of the Husband, Adrienne Rich’s The Dream of a Common Language, Lorna Crozier’s Bones in Their Wings, and Jan Conn’s Botero’s Beautiful Horses come to mind. The second group of books came from my interest in landscape history and aesthetics that inform Cityscapes, particularly as framed through political economic, post-colonial, and feminist lenses: alongside primary sources such as William Gilpin’s An Essay On Picturesque Beauty and Dorothy Wordsworth’s beautiful and important Grasmere Journals, my thinking was influenced by Joanna Zylinska’s On Spiders, Cyborgs, and Being Scared: The Feminine and the Sublime; Elizabeth Grosz’s Time Travels: Feminism, Nature, Power; Ann Bermingham’s Landscape and Ideology; Jill Casid’s Sowing Empire;  and Susan Glickman’s The Picturesque and the Sublime: A Poetics of the Canadian Landscape. 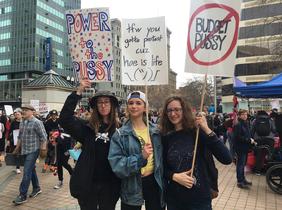 LG: For the next march: “No one has imagined us.” – Adrienne Rich. From the last march, made by my friend Hannah: “Budget Pussy” behind an interdictory circle.

LG: Compulsion, confusion, arrogance, inspiration? I was shuttling a lot between Montreal, Ireland, and British Columbia—now Alberta and California too—and I was really renegotiating my relationship to place, and how that relationship couldn’t be a purely intellectual, or linguistic one, but grew out of how the body (and for me, specifically the gendered female body) moves, fears, sickens, or desires differently in these cities and spaces. Another boring and not very true answer is that I was doing a Masters in English and had to produce something in order not to disappoint my brilliant peers and supervisors, and that something eventually grew into this book. But a better answer is that much of the motivation for writing this collection came from being surrounded by these inspirational poets and thinkers and feminists. I wanted to be in conversation with them. I still do.

LG: Poetry as resistance for me recalls collaborating with other writers to produce a resistance-themed chapbook that we mailed to every member of Quebec’s legislative assembly during Montreal’s 2012 student protests. I’d also like to say something smart about how the creation and dissemination of poetry resists profit-driven capitalist modes of production—but while that might be true, that claim also risks romanticizing the very lack of remuneration that can create barriers, appearing to leave poetry primarily to those who have the privilege of leisure. So for now I’ll stick with the chapbook anecdote: there is resistance in the pleasurable act of slipping each slender book into the mailbox, knowing they will not be read. 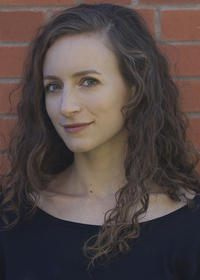 Lise Gaston grew up on both sides of Canada, in Fredericton and Victoria, and has also lived in Toronto, Halifax, Montreal, and Limerick, Ireland. Her poetry, essays, and reviews have appeared in journals across Canada, the United States, and Ireland, including Arc Poetry Magazine, European Romantic Review, The Fiddlehead, Lemon Hound, The Malahat Review, Matrix Magazine, Numero Cinq, and Prairie Fire. Her writing has won awards in Arc's Poem of the Year and How Poems Work contests, and has been selected for Best Canadian Poetry in English 2015. She is a graduate of English and Creative Writing programs at the University of Victoria and Concordia University in Montreal, and is now a PhD Candidate in English at the University of California, Berkeley. She divides her time between Berkeley and Edmonton. Cityscapes in Mating Season is her first book.

Buy Cityscapes in Mating Season or any of our other featured poetry month collections and get a Poets Resist pack of a patch and buttons to wear to your next protest. And if you need some more resistance poetry inspiration,  check out our poetry bot!