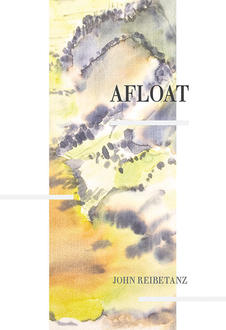 Poet John Reibetanz's collection  Afloat (Brick Books) explores humanity's relationship to water: how we use it, are threatened by it, corrupt it, and are made whole by it. John calls our relationship with water the "natural metaphor for the reciprocal relationship between humanity and the environment," discusses his inspirations both poetic and photographic, and shares the poem "Another River" in our interview below.

Poet John Reibetanz's collection  Afloat (Brick Books) explores humanity's relationship to water: how we use it, are threatened by it, corrupt it, and are made whole by it. John calls our relationship with water the "natural metaphor for the reciprocal relationship between humanity and the environment," discusses his inspirations both poetic and photographic, and shares the poem "Another River" in our interview below. 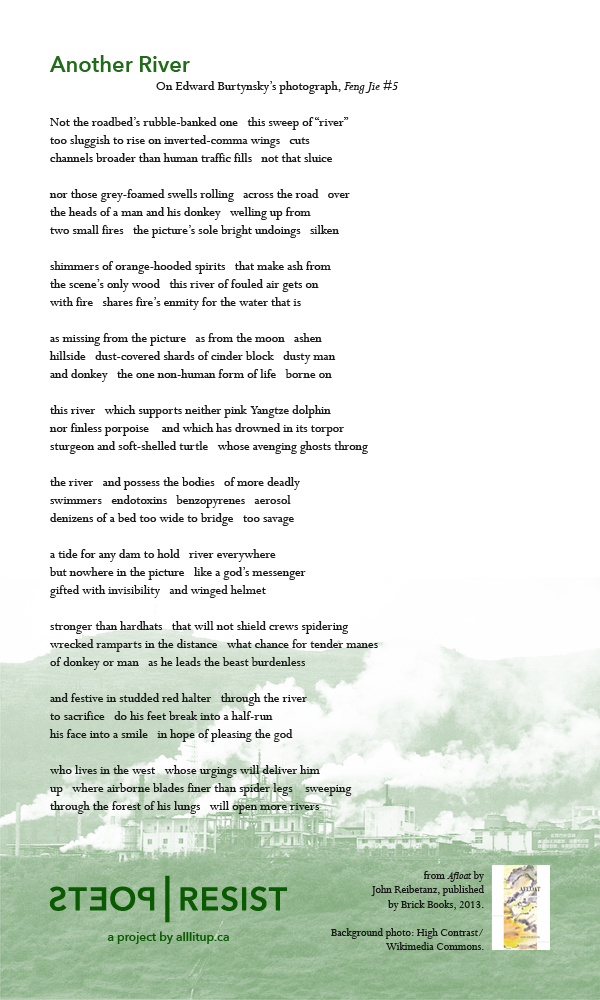 ALU: What are some books that inspired or informed Afloat?

JR: The poetry collections I was drawn to while writing Afloat represent a strong current in contemporary Canadian literature: work by such figures as Don McKay, Karen Solie, Roo Borson, Maureen Scott Harris, and Don Domanski.  They offer, as McKay put it in an interview, a kind of “environmental thinking” where “poetry and an ethical revising of values go hand in hand.”

However, Afloat also draws on traditions of environmental writing that go beyond poetry and that reach far back in time. Philosophically, Maurice Merleau-Ponty has been a source of inspiration, especially through his keen and stimulating insistence on the necessary interrelationships and continuities between self and other. As he wrote memorably in The Visible and the Invisible, “Where are we to put the limit between the body and the world, since the world is flesh?” His work opens new and extremely topical ways of thinking about the place of humanity in the physical environment, as do the ecological writings of his follower David Abram. Abram’s Becoming Animal: An Earthly Cosmology is all about relationships between, as he puts it, “the body and the breathing earth.” Insights from both these theorists have often provided my poetry with points of departure and return.

“Lament of the Gorges,” the main sequence in Afloat, uses images from Edward Burtynsky’s photographic series “Before the Flood” as a central point of reference, but the sequence and the collection as a whole also relate to thousand-year-old traditions of landscape painting attached to the Three Gorges area. Dong Yuan’s tenth-century scroll, Riverbank, established aesthetic norms for the interrelationship of human activities and natural settings that have been a model and a perennial source of renewal in Chinese art, and that provide precedents for the environmentally conscious response to landscape that I take in my poems.

Finally, and perhaps most importantly, Afloat also draws on and benefits from the long tradition of poetry associated with the Gorges region, most especially that of Tu Fu, China’s greatest early poet. Tu Fu resided for several years at the Gorges town of K’uei Chou (now Fengjie, at the centre of the dam project). His poems juxtapose scenes from the Gorges with responses to eighth-century political upheavals, and his famous dictum that “the nation is shattered but the mountains and the rivers shall remain” has been put to the test in this century in ways that I find creatively intriguing and stimulating. The best known poetic sequence by his later T’ang follower, Meng Chiao, “Lament of the Gorges,” is also a focal point in my work, since it depicts a landscape that has been either vastly changed or completely obliterated by the Dam.

ALU: If you were protesting environmental destruction, what would your protest sign read?

JR: “Save the Environment: Save Your Breath”

JR: These poems arose from my fascination with water. In a primary physical sense, it is water that connects us with our environment. Our bodies are sixty percent water, and water is the resource most necessary to sustain life. It’s in every breath we take in or give out, and when we breathe we engage in a kind of silent dialogue with other breathers. As the poem “Soundings” puts it, “In this sea of breath, where does the soul of one breath-river end, and another begin?” And yet, just as the relationship between people can become oppositional as well as communal, so humanity’s relationship with water has this same ambiguity. Water can be the formidable Other: immersion in it can kill us, and its destructive power is felt in such events as tsunamis or hurricanes. So this ambivalent position makes water a natural metaphor for the reciprocal relationship between humanity and the environment. When we forget that reciprocity, we do damage to both the natural world and our own potential as sensory beings. Water, whether splashed on the face or contemplated, awakens us to our connectedness with the natural world.

JR: It means giving poetry a backbone so that it can resist any forces that the poet’s conscience finds unacceptable.

One way of doing this is to try to learn from history, which can provide a kind of calcium supplement for that backbone. As I immersed myself in the history of the Three Gorges, I kept marveling at how many of the same issues that we confront (and for which we have coined terms like “ecology” or “alienation” or “exploitation”) troubled eighth- or ninth-century China. One may view this fluidity as depressing – we have yet to solve problems that are over a millennium old – but it is also encouraging: we are one with our ancestors, not alone, and perhaps some of their attempts at addressing these challenges can provide us with valuable starting points.

Another way is more tied up with the process of writing, searching for means of awakening the reader’s conscience, so that she becomes an ally in the resistance. As part of my attempt to evoke a fuller participation not just in the poems’ experiences but in the issues they raise, I’ve been working to find equivalents to the challenging, participatory forms of the classic Chinese poets. I have tried to develop a more muscular, flexible prosody, one that both allows the words to “float” between speech and song, and that also involves the reader as a more active participant in the poems’ outlook. 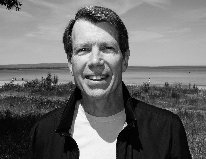 John Reibetanz was born in New York City, and grew up in the eastern United States and Canada. He put himself through university by working at numerous non-poetic jobs, and is probably the only member of the League of Canadian Poets to have belonged to the Amalgamated Meatcutters Union. A finalist for both the National Magazine Awards (Canada) and the National Poetry Competition (United States), he has given readings of his poetry in most major cities in North America. His fifth collection,  Mining for Sun (Brick Books, 2000), was shortlisted for the ReLit Poetry Award. John Reibetanz lives in Toronto with his wife and three children, and he teaches at Victoria College, University of Toronto, where he received the first Victoria University Teaching Award. When he is not writing or teaching, he bicycles, kayaks, reads local history, and listens passionately to 1930s jazz.

Remember, buying  Afloat or any of our other  featured poetry month collections nets you a Poets Resist pack of a patch and buttons to wear to your next protest. And if you need some more resistance poetry inspiration,  check out our poetry bot!