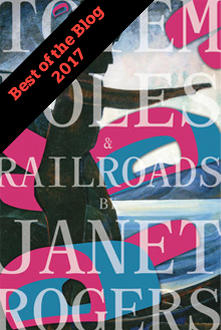 Day two of #poetsresist for National Poetry Month calls up Janet Rogers to the anti-colonialism plate: her fourth collection  Totem Poles and Railroads (ARP Books) interrogates Canada's often hurtful relationship with Indigenous Peoples in the post-TRC era of our history. Rogers writes poems as fierce reactions to current events and to the "historical record" of Canadian dogma. 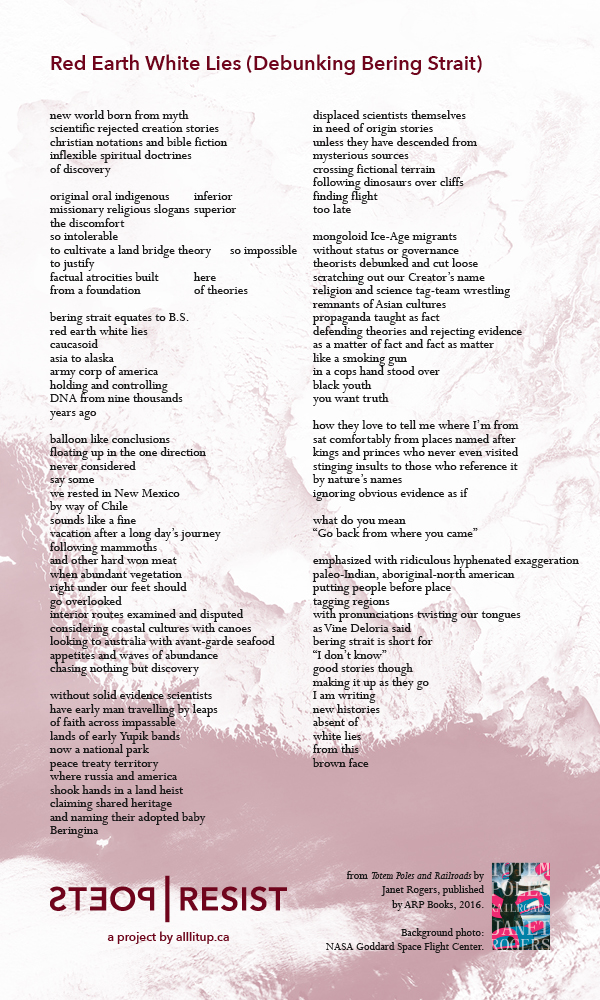 ALU: What are some books that inspired or informed Totem Poles and Railroads?

JR: There weren’t too many books that inspired the contents of this collection except for the research I did which informed the Pocahontas and Sacajawea prose pieces. And the research materials were all written by men of course, and those who interpreted the history of those women. Goes to show you, “he” who holds the pen, holds the power. So there was an appropriation of sorts or reclaiming if you will in gathering their stories back and writing from a first person perspective for Pocahontas and Sacajawea. I wanted to give them their voices back and have the reader consider their history from the perspective of these iconic women.

A number of the other poems, especially the TRC-inspired pieces were inspired and informed by new technology and what I mean by that is I was watching the TRC Hearings and the announcements of the Final Report and list of Recommendations as they were being presented, through livestream events on the web. I wrote the bulk of the poems in Totem Poles and Railroads during my Writer-in-Residence term at the University of Northern BC, way up north in Prince George, but I stayed very much in touch with the rest of the nations across our territories through the web.

ALU: If you were protesting colonialism, what would your protest sign read?

JR: “Reciprocity.” There are so many meaningful slogans being shared around today for example “Nothing about us without us” meaning we, as Indigenous people need to have important and meaningful positions in any and all governance in regards to our bodies, our culture, our lands and our future. Better yet, we set the political and cultural standards by which we wish to live and conduct ourselves and have the colonial government bend to our policies and laws. Reciprocity of land and resources could ensure equality between nations and would most certainly establish equal treatment of Indigenous peoples with this corporation/country when we have an equal say in how we manage our lands rather than constantly being considered wards of the government and being told how our future will unfold. Also “Dissolve the Treaties” is a good one.

JR: Well I have said many times, that I did not plan to write a new collection of poems in 2016. In fact my intention was to write a radio play while at the UNBC Writer in Residence. So the collection came as quite a surprise and it actually took me a while to realize what was going on. The poems kept coming and they came with such ease and vibrant inspiration. Before I knew it, a collection was forming and I had to relent and say “Okay, I get what’s happening here.” And then I conscientiously switched focus from the radio play to poetry. I’m so very glad I did. This collection makes me feel that I have contributed something of significance to our collective times and for future generations to gain a sense of our current nation to nation relationships. Some of the poems will definitely speak to a delicate beginning towards a shift in power or at least in collective conscientiousness. I feel this book has a life of its own, it wanted to come into being and I’m so grateful ARP Books picked it up so quickly and its has been so well received.

JR: As Indigenous writers, and I certainly don’t speak for all Indigenous writers; but I think I can say with confidence that we understand that all the arts, writing included, is an act of resistance and is political. It really wasn’t that long ago when our dances, our songs, our gatherings were forbidden by law, Canadian law. People were jailed or their livelihoods were threatened just for wanting to be who we are, as Indigenous people on our lands. So considering there was a time when our voices were literally being silenced, I see writing and speaking about writing as a way to fill the void that once existed. And I feel it’s important for Indigenous artists to take up space, or reclaim spaces on the cultural landscapes on our territories and to be vigilant in doing so. The minute we leave a creative, a cultural or political space vacant of us, we get forgotten. And it’s a sad fact that this country hasn’t realized yet that Indigenous history and identity is the basis of “canadian” history and identity. They often want to pick up the story half way through. But that’s an incomplete story. Or the colonizer thinks they do us a service by telling our stories from their perspective; well that’s just appropriation of voice, another way to disappear us. The poetic and creative voice has a way of conveying hard cultural and political truths the way other forms of communications, can’t. I write poetry to be heard. 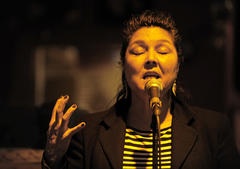 Janet Rogers is a celebrated spoken-word media artist and radio host. A Mohawk writer from the Six Nations band in southern Ontario, Rogers was born in Vancouver, British Columbia, and has resided in Victoria since 1994. She began her creative career as a visual artist, and began writing in 1996. Since then, she continues to stretch her abilities as a writer working and studying in the genres of poetry, short fiction, science fiction, play writing, and spoken-word performance poetry. She has three published poetry collections to date: Splitting the Heart (Ekstasis Editions, 2007); Red Erotic (Ojistah Publishing, 2010); and Unearthed (Leaf Press, 2011). Janet served as Victoria's third Poet Laureate from 2012-2014.

Janet Rogers hosts Native Waves Radio on CFUV 101.9 FM and Tribal Clefs every Tuesday on CBC Radio One. Her video poem "What Did You Do, Boy," created in support of a spoken word track from her CD Firewater, earned nominations at the Canadian Aboriginal Music Awards in 2009 and the Native American Music Awards in 2010. Rogers's radio documentary "Bring Your Drum (50 Years of Indigenous Protest Music)," aired in July 2011 on CBC's Inside the Music and won the Best Radio award at the imagineNATIVE Film and Media Festival in 2011.

Don't forget: buy Totem Poles and Railroads or any of our  other featured books and get a set of resistance buttons and a patch FOR FREE all April long. And if you need some more resistance poetry inspiration,  check out our poetry bot! 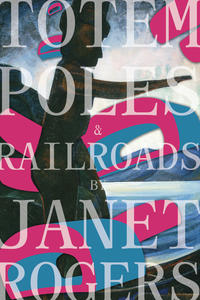