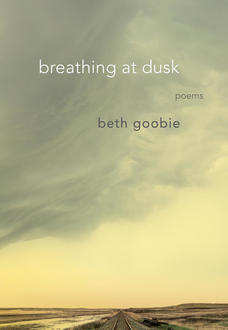 Poetry in Motion: Strength and Repair in Beth Goobie's breathing at dusk

Beth Goobie's breathing at dusk is a response to her 1994 collection Scars of Light – both collections address the author's harrowing abuse at the hands of her parents, but breathing at dusk reveals the poet in recovery, not anguish. Beth shares her journey to healing and writing this collection, below, and we feature two video readings from the book.

I wrote breathing at dusk for two reasons. First, I wanted to inform the general public about the family-based child prostitution and pornography my parents used me for, with an emphasis on some of the sophisticated mind control techniques that they used. Second, I wanted to write a sequel to my first book of poetry, Scars of Light, which was published in 1994 and dealt with some of the physical, sexual, and ritual abuse I’d been put through, as well as my brother Mark’s suicide at fifteen. Scars of Light ended on a devastating note, which was appropriate to writing about any suicide resulting from abuse, especially by a fifteen-year-old boy.

However, in the intervening quarter century, things have changed. I’ve been through two decades plus of an intense recovery process, which has involved recovering many thousands of repressed memories, and writing twenty-five books, many of which dealt with the topic of sexual abuse in its various forms. Most of those days were a long slow plod through a dark tunnel that never seemed to end. I remember thinking, somewhere in 2003, that if I just kept going, some day things would be different. So I kept plodding. And the memories kept coming. And the dark tunnel kept getting longer, and longer, and longer.

But slowly, very slowly, things did get better. Somewhere in that process of continually plodding on, the dark tunnel started to lift. And then, some time in 2016, I realized the dark tunnel was gone – it wasn’t so much that I’d reached the light at the end of the tunnel, but the tunnel itself had dissolved. And when that dark tunnel dissolved, it allowed me finally to come into direct contact with other people, the natural world and normal life.

I wanted to let people know that full recovery is possible. The end of Scars of Light is not the end of the story. This is a message that is most important for the survivor community, but it is also an important one for the various communities of pedophiles and cults: We will remember. We will recover. And we will speak out.

And so, in 2012, I applied for a Saskatchewan Arts Board grant, to write a book of poetry that would be a twenty-year look back on Scars of Light, with an emphasis on the change that comes with recovery, the healing and the joy.

Hear Beth read a few friends from breathing at dusk:

Lorna Crozier reads "a delicate earth" from breathing at dusk:

Our immense gratitude to Beth Goobie for her openness on the inspirational healing that went into  breathing at dusk, available now from Coteau Books. For more poetry in motion, click here.