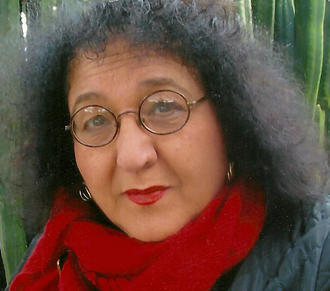 The year was 1960 when I first began scribbling poems and stories in my notebooks.  My advent into the world of creative writing (although I wasn’t aware it was creative at the time) started as a reaction to what I sometimes refer to as “my immigrant damage,” a very real childhood trauma.  It was the year when I watched the arms and the head of my beloved doll tear away from their elastic entrails and fall apart into the Atlantic Ocean minutes before our ship entered its destined port of Halifax, Nova Scotia, at Pier 21.  July 3, 1960 was the date of my immigrant landing. I think of that date as both the end and the beginning of my journey.

At age nine I had no knowledge of metaphors but at six-times-nine I have come to a clearer understanding. The demise of my trusted companion/doll who had quietly crossed the ocean with me and shared my tears, my anxieties and my fears, for days beneath the sea line of that enormous ship, would become the metaphor to my life.

I watched as the head and arms made the long drop into the ocean, floating on the cold blue water of the Atlantic, finding their way back over the waves. The black eyes and magenta lips of my doll’s ceramic face turned towards the enormous and new Canadian sky. I stood frozen on the deck of the ship and if I cried I cannot remember.  I know only that I held the torso and legs of what was left of my doll, tight in my grip and watched the rest of her quickly disappear over the lapping rhythm of the moving water.

The remains of my decapitated traveling companion would accompany me the rest of the way on a slow train, headed for Toronto along with my mother and younger sister. Mamma, her young heart swelling with the need to protect and nourish, managed to purchase a jar of orange marmalade and a loaf of white Wonder bread at the port and two oranges; our first Canadian meal. We consumed the strange concoction on the two-day train ride to Union Station while my sister wailed endlessly for pane e mortadella.

Two days on the stiff wooden seats of a train headed toward a brand new city, a brand new language, to re-connect with a half forgotten man who was my father.

When I first began writing in my Hilroy notebook with the thick blue lines I was nine years old and “fresh off the boat” as they used to say. The Hilroy notebooks were a gift from my father, along with a box of coloured pencils. They were the first gift I remember receiving from him and I have always treasured the memory. His second gift when I was sixteen was an Olivetti/Underwood typewriter. Perhaps he anticipated the pencils and paper and the typewriter would eventually become the tools of my voice in a place where he knew I would have difficulty speaking.

You would think after all these years I would be over the seasickness, the discomfort. You would think I would have put away the memories, sung them all a lullaby and let it all finally rest. It has been that long that I should finally be rooted in this Canadian earth where my father is buried and where I am growing old. But it may be true that only the flesh grows old, the heart, the soul, the memories carry on as if they were still nine years old.

I belong to a generation of immigrants who arrived as young children in the sixties. I think of us as the in-between generation whose memories are still as vivid and clear as when we unpacked them at age nine or ten. We were neither children nor adults. We were not old enough to choose our future and too young to refuse any decision made on our behalf. But we had a language, a history, a memory, a religion which we brought with us and it would be forever stamped on our complicated and confused future struggle with identity.

The Hilroy notebooks and pencils my father provided would become my salvation, my inheritance, my act of survival. What I could not say with my lips, I wrote with my pencils on the blue lines.

Toronto of the 1960s offered little to a nine-year-old immigrant girl who had lived her formative years in the open fields of a southern Italian town, in a landscape of hills and sky and trees. The Hilroy notebooks and pencils my father provided would become my salvation, my inheritance, my act of survival. What I could not say with my lips, I wrote with my pencils on the blue lines. All the fears, all the confusion, all the strangeness of this new world, the abandonment and the loss filled book after notebook. Writing allowed me to speak, to scream, to curse, to blame and even to kill, on paper.

It all began in the basement kitchen of that semi-detached house on a dead end street by the railroad tracks, where I sat at the table and waited for my parents to come home. My parents whose lives were now defined by their presence in long factory lines, in rooms without windows, from seven in the morning until six in the evening their lives were removed from mine.  At age nine I became my keeper and my sister’s guardian.

Ten books later I still write in the kitchen—my own kitchen—on a downtown Toronto Street. My kitchen with the large window that looks out onto my cherry tree, and I remember.

I do not know why my writing takes the shape of poems and stories, some things are not ours to explain, nor do I know why some emotions feel the need to be written in English and others in Italian. Sometimes the piece is looking for its own language and identity, and language and identity has been a topic of debate and discussion all my life.

The duality of my language is as organic as the activities I perform each day in my life. I live my life not in two languages but in three. My ciociaro dialect is the language I speak with my mother who is 92 years old. It is my first real language and the one my mother and I communicate in exclusively. It is a regional dialect spoken in the Province of Lazio (Latium) in central Italy where I was born. Italian is my second language, formally taught in the first three years of schooling in Italy. English is my third language, but it is the language that my poems eventually chose to reveal their voice. I am most comfortable with English because it is the language of my education—my English degree from university and my degree in Education. But sometimes, when the mind and the heart are pricked by memory, nostalgia, and pain the poems come into my head in my first language, ciociaro or Italian and I welcome them.

...I have stopped worrying about language, or rather stopped obsessing about it, because I have come to accept that rhythm, sound, and voice find their way without constrictions and boundaries and will reveal their essence within their truths. I let the poem choose the language it feels comfortable with and I allow the voice to make its mistakes.

When I was much younger, I agonized about how less than perfect I was in all three languages, how I had to struggle to find the perfection in all of them to be able to express my poems and stories, making sure I had the correct grammar, the correct word, the proper nuance. But at this stage in my life I have stopped worrying about language, or rather stopped obsessing about it, because I have come to accept that rhythm, sound, and voice find their way without constrictions and boundaries and will reveal their essence within their truths. I let the poem choose the language it feels comfortable with and I allow the voice to make its mistakes. The mistakes also tell a story.

I have been trying, with some success, to translate my original work written in English into Italian, and it does present a challenge because the birth of the piece, its first conception is what truly defines it, gives it the specific rhythm, sound and meaning. Sometimes the original is reluctant to present itself in new clothes and trying to translate it into another language rarely improves the outfit, but I enjoy the confrontation and have fun with the exercise. I have sometimes translated the same poem into Italian and also into dialect to see the difference in rhythm and I find the impact of the dialect is often more closely connected to the original and to the sensibility of the message. In the proper Italian translation I am sometimes unable to capture the shade or the tone that made it distinctive. I think for me it is because proper Italian is not a language that is a daily part of my life, and I cannot find the familiarity or the comfort in it that I crave or need.

I am a minimalist by nature. At times I have tried to translate my work into a prose style of poetry, to play with longer descriptions and structure to tell a story. In Italian it works quite well because it is a language of great beauty and ornament, but in dialect less so because dialect seems to be by nature minimalist. The ciociaro dialect is expressed in short, clear, musical sounds, where words are often cut short, and vowels dropped. As my mother often reminds me, “i tiemp passa, parla leste,” which means “time is passing, say it quickly.”

My three languages are each equal in my need for them to express my identity in the same way that memory and imagination are part of my identity. They are the reunion of all the doll parts coming together to be whole again.

How fortunate am I to have three languages in which to dream, in which to remember, in which to write this one voice that has found a notebook for her life.

"My Voice in Three Languages"

each language i speak

is a second language

there is a dialect

i understand my mother by

there are words i write

in English that my husband edits

there is a sound in my head

that sings my grandmother’s songs

there is a language my heart speaks

that even i cannot translate

but language is always an issue

the reasons for listening

for time and remembering

i tear a sheet of clean paper

from my head, to write

a language our spirit

Gianna Patriarca was born in Italy and immigrated in 1960. Her publications include seven books of poetry and one children's book. Her first collection, Italian Women and Other Tragedies, was runner-up to the Milton Acorn People's Poetry Award and in 2009 was translated into Italian and launched at the university of Bologna and Naples. My Etruscan Face was shortlisted for the Bressani Literary Award in 2009. Her work is extensively anthologized in many Canadian, American and Italian publications, and is on university course lists in all three countries. Her work has also been adapted for the stage and for CBC radio drama, and has been part of the documentary Pier 21 with TLN. Her most recent short fiction collection, All My Fallen Angelas, was published by Inanna Publications in 2016. She lives and works in Toronto.