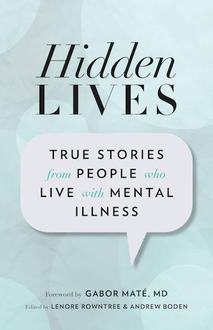 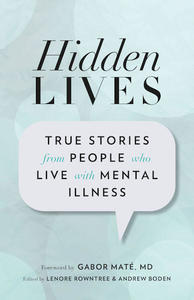 This month's featured book is  Hidden Lives, published by  Brindle & Glass Publishing. Hidden Lives is a collection of personal essays on the wide-ranging topic of mental health.

From the publisher: "Rather than analyze the diagnoses and symptoms, these first-hand accounts focus on the very essence of a psycho-emotional breakdown, and respond to the mental, physical, and emotional turmoil it inevitably causes ... Raw, honest, and painful, these essays communicate disappointment and despair, but also courage and compassion. They offer a lifeline for sufferers and support for their friends and family, and promote new and improved attitudes toward those with mental illness."

Ultimately, the goal of this collection is to reduce the stigma around mental illness, to remind us that most of us are touched in some way and that we're not alone.

Jules' Tools aims to amplify voices of people writing from their lived experiences as often as possible, and therefore, this column will focus on a few of the essays in this collection that are written from a first-person perspective of living with mental illness. Readers should note that that this book also features some stories from folks who live with, care for and love people with mental illnesses.

In Over and Overcoming, Yaho-Hanan Fiwchuk details his lifelong experiences of psychosis, and managing them with medications, learning new things, practicing tai chi and painting, and maintaining an awareness of his illness, which keeps dangerous thoughts and voices at bay.

“But I take the bull’s horns and there I pray and deal with this illness of mind—my affliction. Something so personal, a few words on paper do it no justice. So I paint. Moving colour on canvas does the job, oh so well.

My soul is left imprinted on confines of not more than 20" x 20" (that’s all my easel will hold). But what I see is not the truth, only an abstract extension of internal plight. The apartment where I live is full with my paintings and sketchbooks.”

Catherine Owen shares, in Atlas and the Cheese Cube:

“While many who don’t understand obsessive compulsive disorder (OCD) tend to dismiss it with such statements like, 'I think about stuff a lot too' or 'You’re such a neat freak,' those who truly suffer from the condition find that OCD patterns and behaviours consume a large part of their daily activities or thoughts. Living with OCD can be like existing in a continually twisting kaleidoscope in which one cannot just let the bits fall as they may. One must strain always to master their tumblings, to replicate their structures, to keep breathing despite the wilfulness of all those fragments in their relentless descent.”

Owen's father and son also have OCD, giving her a perspective of living with and of observing the condition in others. She becomes self-conscious and tries to hide her OCD in childhood when her compulsive behaviour is pointed out by a relative. In adulthood, her OCD has "internalized itself linguistically":

“My words, incapable of arranging themselves in prior fashion, are likely to emerge imperfectly, a situation that can create intense frustration for me and the desire to avoid off-the-cuff opportunities in order to spare myself this stress.”

Andrea Paquette started a project called Bipolar Babe, "an army of survivors alongside others who want the survivors to survive." Her essay, also called Bipolar Babe, credits her doctor, Dr. J, for his trust, respect and support in launching the project, which includes sharing her experiences in classrooms to create acceptance and understanding. Paquette has gone on to launch the Bipolar Disorder Society of BC with five other founding directors.

“Now that I have arrived in this place, it feels like I have reached the most significant milestone of my life. I have raved about the project on numerous radio shows and each time it feels like I get a little piece of my heart back. It reminds me that all the pain and torture I went through was somehow significant and meaningful. Now I can share it with the world and I can finally heal.”

In The Biology of Human Starvation, Laura Ingram relates her experience with anorexia with raw, poetic honesty. Always small and tormented by peers for being skinny, Ingram is increasingly unable to eat.

“I had breakfast every morning before the bus came, because I’d read in some magazine my mother kept on the coffee table that kids who don’t eat breakfast are more likely to become overweight. There were just lots of foods that skimmed my stomach like dull scissors. I didn’t like to eat as much as they did, didn’t need to.”

Beth Rowntree is the sister of Lenore Rowntree, one of the editors of this anthology. One Girl in the Crowd is excerpted from an autobiography she wrote in 1984 about her experiences with schizophrenia.

“I thought I have a good home to come from. So if group homes, etcetera, fire me it’s not the end of the world, but if I was kicked out of my real home I would never be able to stand the harsh reality and I might add frightening reality.

I thought I am in very good health physically, emotionally, and mentally. I have everything going for me, everything worth living for, everything to be thankful for plus a lot to offer the world!!!” 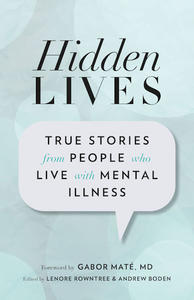