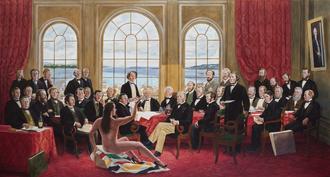 Canada 150 has been a chance to reflect on our country's great achievements, sure, but with it comes a sobering look at its history of settlers mistreating the Indigenous peoples who were here first. In comes Indigenizing: a process of (re)introducing Indigenous customs, languages, and stories into Canadian government, history, and society – one that we think CanLit could stand to use, too. Here's a look back at five ALU posts that show we've gotten started.

Image at left is Kent Monkman's "The Daddies".

Here's the five All Lit Up posts that point to a growing Indigenization of CanLit (which, did we mention we're 100% for?).

1. Remembering the positive effects of speaking out with The Native Voice

As part of our celebration of National Aboriginal Day this year, we took a look at Eric Jamieson's  The Native Voice (Caitlin Press), a history about the newspaper of the same name founded by the Native Brotherhood of British Columbia, right at the end of World War II. Helmed by a fierce advocate for Indigenous rights, Maisie Hurley, we looked at five stories the paper brought to the forefront of Canadian conversation, including the Indigenous right to vote, treaty claims, and the deplorable conditions of then still-operating Residential schools.

2. The necessary discomfort of hearing words you don't understand

In " Making space on the page to read our own words: Indigenous languages and Canadian Books", author Cherie Dimaline discussed the growing use of Indigenous languages in books published in Canada, and the power of having those words on the page and read aloud. Not only does it foster community and preserve and strengthen those languages, just publishing and reading these languages also makes apparent the country's troubled past with suppressing instead of celebrating them, because in the latter hypothetical case, we'd be a nation full of multilingual people. Quoting Leanne Simpson in the piece: "...it is important [for settlers] to feel unsettled and challenged about one's entitlement to grasp the full meaning of Indigenous literature."

3. Queer feminism in an Indigenous context

Two-Spirit/trans Metis poet Gwen Benaway shared the back story behind the quotations she chose to head up her latest poetry collection,  Passage (Kegedonce Press). Speaking to Adrienne Rich's "when a woman tells the truth, she is creating the possibility for more truth around her," Benaway added to it the context of living as a trans Indigenous woman, who's "often punished for speaking truth. My truth telling is framed as vulgar, self-pitying, or a lurid confession designed to seek attention or attract sympathy." She's allowed us to see the heightened stakes of truth for people living at various intersections of identity, including Indigeneity and trans womanhood.

4. The short story form as analogous to experience

Last month, Julia interviewed author and comedian Dawn Dumont on her new book of interconnected short stories, Glass Beads (Thistledown Press) for her Jules' Tools column. During the interview, Dumont mentioned that she wrote short stories with the same characters instead of a novel because they "came out that way", but moreover that any reader frustration with large chronological gaps between the stories is "what it feels like to be First Nations and lose contact with the people you care about because of poverty, dysfunction, and just not having great communication skills."

5. A new generation of voices

Of course, we can't help but gush about the 16 authors on All Lit Up who won REVEAL Indigenous Art Awards this past year, "fuelling Indigenous arts practice for the next 150 years" (and hopefully beyond then, too).